Benjo got lost in the Bronx when he took the wrong subway and ended up deep in the hood. I told him that was the perfect workout for hanging in Atlantic City, the land of sketchy, for a three-show run with the Phish. IronGirl drove us from NYC to AC in record time. We settled into our hotel, picked up provisions for a 72-hour bender, and made our way down to the Boardwalk.

No lot scene, which was expected, but even a mini-Shakedown that popped up on a side street was shut down by the local po-po. The scene in front of Boardwalk Hall became a general Shakedown area as heads wandered back and forth on the boardwalk. Lots of extras floating around. Tanks were hissing on the beach, which also became a haven for pot smokers. The nitrous mafia even handed out fliers that offered up hotel-room delivery of tanks. Welcome to Atlantic City.

The venue was massive, and looked much smaller in pictures. The room was sort of a half-tunnel. The large rounded ceilings reminded me of subway stops in London or in Spanish Harlem in NYC. You could fly a mothership inside and have a pro football game on the floor. The moment I sat down I thought, "This would be an amazing place to hear Trey shred Zeppelin."

I popped a party favor before I got in line and it hit me hard.

I was pretty schwasted and the show had not even begun. I barely survived a trip to the bathroom. On my way back, I struggled to stand up straight and confessed to Benjo, "Brah, I'm schwilly. It feels like that scene in Fear and Loathing when Hunter sniffed ether and they can't even walk through the casino."

Benjo knew exactly what I was talking about. I described the inebriated sensation to that amusement park ride that shoots you straight up into the air for a reverse free fall. Before the set started, I hung out with Branden and Dallas Dave. 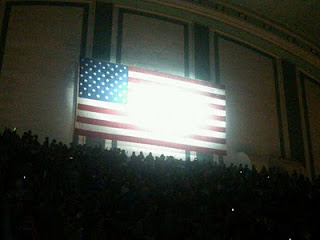 The light went down and the band huddled in front of Page's rig. We new something acapella was upcoming, but didn't expect the Star Spangled Banner, but should have because of the gigantic flag hung up on the wall at the back of the venue.

My Soul was up next and the bluesy soul song was in Page's wheelhouse. It was evident from the get go that: 1) Page was going to be the man all night, and 2) Trey's guitar was jacked up way past "11" and more like 17. I struggled to adjust to the sound. I couldn't hear Gordo in the mix. We were spoiled with smaller venues the last few shows because Boardwalk Hall is one massive tube where Phish was conducting their mass group experiement.

AC/DC Bag popped up after My Soul. "A first set of show openers," remarked Benjo.

We got treated with an uppity version of Ocelot, compared to more faded ones earlier on tour. And yes, I was wearing an Ocelot shirt. The crowd sang along with Sample in a Jar, before things really got cooking with Light Up or Leave Me Alone. The Traffic cover has been getting lots more airplay in 3.0, and it's another vehicle to let Page let it rip. The layered and enthusiastic jam out was one of my personal highlights of the set that included lots of Trey's machine gun burst of notes.

I smoked tuff during Gordo's Sugar Shack. Seemed like the mix started improving around Timber Ho, and CK5's UFO lights made a triumphant return and Fishman did his best impression of five African drummers. If I had to piss, I would have bailed for Bouncin', but luckily I didn't go and caught a pulsating and ear-ringing Axilla. I really felt as though the show (and the three-night run) really began with Axilla, because everything before that was "spring training" or "pre-season."

A hard-rocking Rift kept up the momentum, which culminated into a trio of smoking tunes to close the set... Moma Dance > Cities > 46 Days. The boys brought the roid funk to AC with Moma, before it delved off unexpectedly into a rushed, yet high-octane version of Cities that included CK5 turning up the house lights along the side walls. A scorching 46 Days ended the 14-song set on a high note.

By setbreak, I sobered up a bunch and had a more calmer time than the frantic insanity that overwhelmed me before the set. Couldn't find any water. Benjo bought me a Bud Lime. yes, I was pounding Bud Lime, the official drink of Guidettes from the Jersey Shore.

We snuck Irongirl into our section and the second set kicked off with a crowd-loving PYITE, which was immediately followed up by a dirty dirty dirty Sand. My only complaint about the song was that I wish Gordo was turned up louder and Trey turned down a bit. A gritty-blues-funk jam got squeezed out of the end of Sand that eventually picked up steam and eventually blasted off into Carini. The floor below me was shaking the hardest of the night for Carini. Phish downshifted with Caspian and an even mellower Corinna. The pace picked up with an explosive Piper into a solemn Theme. Anyone that the band lost during Theme, was quickly brought back to life with Golgi. 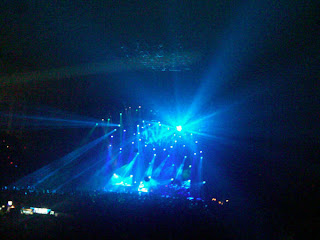 Another epic Slave was followed up by a smoking Fluffhead. I don't think they did a doubled up on those two songs in 12+ years. Talk about a 1-2 punch to end the second set. Loud ovation for the boys as they took a bow, quickly exited the stage, and returned for a solo encore of Loving Cup. Benjo was psyched for Loving Cup and he admitted that the Rolling Stones version is the most played song on his iPod.

Overall, the first set had a few ups and downs but mostly the biggest letdown was the spotty sound mix and lack of Gordo's bong-rattling bass. If anything, it was a little too loud. Usually my ears are ringing when I'm leaving a show, but that not-so-fun sensation tingled in my head during the setbreak. The sound deficiency was improved toward the end of the first set and the boys continued the heat the rest of the night.

The first night of three is done. Got off to a smoking start, wish the venue was a little different, but I'm sure the band and sound guys will figure out how to make things smoother for the other two nights.

We made our way through the casino on the way back to our $30 parking space in the Trump. A couple of old people at the slots were freaked out by all of the dirty wooks asking them for spare change or attempting to decipher faint whispers of "molly."