In Charleston, Otis tossed out a Brett Favre reference when describing how the Carolina crew felt on the morning after the Friday night rager. As much as I wanted to ignore the reality of the situation, he was correct. The one of the most difficult pitfalls to avoid while on Phish tour is the feeling of invincibility while partying in a magical utopia. My age caught up to me on Sunday morning, only a few hours after Saturday Amherst and my seventh show on this tour. I woke up in our Northampton hotel room with a sore back and a searing pain in my right knee (old hockey injury). I popped a Perc, which dulled the pain enough to get me through writing Saturday's recap, and then I settled in to watch football for a few hours. The pain got increasingly worse as the afternoon progressed. I knew that I was flirting with disaster because if I ate any more pain pills and I'd be complete luggage for Phish. I struggled to determine the proper dosage and decided to wait as long as possible to pop another Perc. I gutted it out all afternoon.

Senor drove Irongirl, myself, and his new girlfriend to the show. Once we arrived in the lot, I ate another Perc. Within 15 minutes, we were strolling down Shakedown and I couldn't feel a thing. Senor's new lady friend has only seen one previous show and never got a proper Shakedown experience. She compared it to a foreign market and was fascinated by all of the freaks, puppy pullers, and random girls with butterfly wings.

Shakedown was flooded with booze mongers. The lack of beer sales inside the campus venue forced kids to arrive to the lots early to pre-party, but it also meant that every third person in Shakedown was hawking some sort of liquor product. The marketplace was also saturated with dope peddlers. Lots of paper doses were going around. I turned down a 5-strip for an extra ticket from a pimply-faced kid who looked like he was 16. A shady mook in a green Red Sox hat whispered yay-yo but he looked like an undercover cop. One wook offered up deep discounts on Ketamine, something I had not seen on tour since Colorado. I found the one guy who was slinging pharmies, but he his prices were too high. Even though tickets were being bid for as low as $30, I managed to dump one of Senor's extras for $50.

We went into the show and settled into our seats 12 rows back on the side of the stage. Yep, Senor scored us Page Side Rage Side seats and the four of us sat together. The best part of the view was also getting lots of face time with Trey. In the 3.0 era, he's been spending much more time interacting with Page. There were times when Trey turned away from the audience and got off watching Page rip up a solo, and yeah, it was cool to be so close enough to see his reactions.

I noticed that a roadie stepped out onto the stage a few minutes before the lights went down. He taped a piece of paper in front of Trey's pedals and then slid another paper near Page's bench. I wondered if it were lyrics or the setlist?

Standard AC/DC Bag opener, which is the first one I've caught this tour. In previous years on tour with Senor, it always seemed as though Phish played AC/DC Bag and/or Wolfman's at every other show we attended. I looked around at the floor and tried to piece together the request signs and lots of phans wanted to hear LIZARDS.

The boys brought the disco-funk early on with Camelwalk. I spotted Dave Vann in the photographers well as he side stepped past thick-neck security guards in yellow shirts keep an eye on the stage. He snapped a few photos next to one of the two video guys (I have no idea the reasons why the show was being filmed -- for band's own amusement, documentary, future Phish DVDs?). Dave slowly made his way through the front trench cluttered with balloons only two songs into the show. 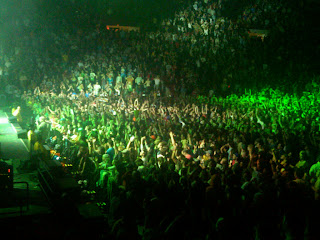 After a funky appetizer, Phish delved into the iconic Divided Sky. Indoor versions sound better than outdoor versions, but we don't have the natural soundings to compliment indoor shows. The section around me was calling for Tube, but instead, the band launched into an unexpected cover of Ride Captain Ride as Phish embraced Yacht Rock. Page took charge with the lead vocals and we got yet another cover where Page can let loose all of his chops. Considering that Ride Captain Ride had not been played in a long time, they nailed the jam.

After a bit of fluffy happy shiny yacht rock, it was time to get down and dirty with Stash. A couple of assclowns with laser pointers were on opposite ends of the venue and zapping each other, which drew the attention of security who quickly took out the troublemakers. One of the benefits of being so close to the stage was that I knew Fee was going to be played as soon as Trey wheeled around and bent over to pick up the megaphone behind one of his stacks. Page had a couple super smooth solos during Fee, which wandered off into a trancey jam that included a NO2 tease but eventually morphed into Time Turns Elastic. Yeah, it's my 10th TTE and the only good thing I can say about it is that a few of the stagnant sections sounded like they were played through much quicker. My theory about TTE is that it was played in Amherst because they'd be less angry drunks (with no beer sales inside the venue), so Trey wouldn't be pegged with glowsticks by soused and hostile fans. Whenever I hear TTE, I get visions of the scene in Blues Brothers when the band played the country and western bar and the crowd starts tossing beer bottles that crash against the chicken wire protecting the band from the ornery belligerent drunks in the crowd.

And in true Senor fashion he said, "Yeah, I don't like TTE, but I was still trying to rock out to it."

After the TTE set fart, the band finished up the set with a duo of high-energy crowd pleasers with Cavern and Antelope. I felt the ground below me shaking for both tunes as thousands of glowsticks filled the air. Impressive display.

Setbreak was when things got a little fuzzy for me. The pharmies caught up and I'd spend the entire second set struggling with anything that involved multi-tasking. Don't get me wrong...I was having tons of fun...too much fun in fact, but I could do only one thing at a time and focused mostly on grooving to the music. I shrugged off the commentary on Twitter and stopped taking notes altogether. Too faded to do anything except listen to the music play.

I was excited at the Seven Below opener for the potential jamming that would ensue. Didn't get too sinister like the epic Albany Seven Below > Ghost, and it almost seemed like they were holding back a bit and kept the song under ten minutes. They tossed a crowd a bone with Wolfman's, and Page stepped it up with some monster mashing as a bit of Roid Funk got injected into the crowd.

I got sucked into a blackhole during Backwards and Alaska. I sorta lost time and was falling fast into the abyss. I had never been that faded at a Phish show before (and the closest was the Nassau show in 2003 that included a scintillating Tweezer). Luckily, I got pulled out of the muck by a spirit enlivening Free. I was able to keep pace with a frenzied calypsoish Lizards and a loud raucous Brother, before I fell back into the void during Roggae > Taste > Waste. Once again, just as I was about to drown, I got tossed a well-needed life preserver with David Bowie, which got off to a rough start, but the boys pulled off a vibrant finish.

The Mighty Quinn encore arrived one night too late, but I was happy nonetheless that the Dylan cover is back in rotation. I was hoping for a dual encore, and we got treated to a double dip with a rare and unexpected Chalkdust. The last Chalk encore was at Shoreline with Bob Weir (I was at that show and they busted out El Paso, and think they played Chalkdust in consecutive nights on that tour).

The Sunday Amherst show looks much weaker on paper than it sounded. Despite my schwilly condition, I had a blast despite the bad back and bum knee. Seemed like I picked the right show to get absolutely faded.