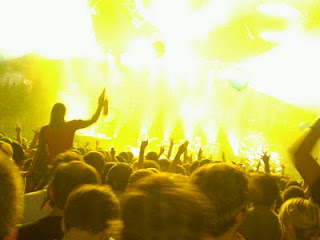 Photo of the second set via me aka @taopauly
Phish stepped up their game in Charleston and blazed their way to a weekend rager. The fire was sparked on Friday and burned through Saturday night culminating in a scorching second set that began with a voluptuous Crosseyed and Painless and included a sultry 2001 Dance Party.

I got a couple of hours of sleep early on Saturday morning, wrote the recap for Friday's show, ate two meals (versus the usual single meal while on tour), watched college football and baseball, played cards, drafted my fantasy Phish team, and properly pre-partied at out hotel. I hit up semi-dry Shakedown twice and successfully sold both of my extras for $50 and $60 even though I saw people asking $25 for theirs. That's how low tickets were going for on Friday, but Saturday was sold out, and I knew I could get as close to face as possible because no one wanted to miss Saturday's show after a greatest hits buffet from the night before.

I headed into the venue shortly after the doors opened to secure a decent spot on the floor. We hung out exactly in the center. I met up with Digg Dugg who showed me his Whale Call shirt. A couple of cool kids (Saxon and Emma) from Pittsburgh were nearby and ended up awesome people to be next to at the show. I accidentally knocked over Otis beer about 15 minutes before lights went down. I rushed off the floor, snagged a replacement beer, and returned with a few minutes to spare.

The boys took the stage and launched into Kill Devil Falls as an inflatable Godzilla crowd surfed for most of the song. G-Rob noted that the specific lyric "this time it's gonna be different" was a hint from the band that Saturday was not going to be like any other Phish show. He picked up on that subtle theme from the onset, meanwhile, Otis locked up the fantasy pool with a clutch KDF opener.

DiscoSis1 showed off her musical nerdness when said she liked Guleah Papyrus because it's a fugue. GP kicked off three consecutive tunes that could have come right off a setlist from the early 1990s with The Curtain With and Mango Song. The Curtain was fairly tight, while Mango Song had a few shaky moments, but they still pulled it off. The trio of "oldies" were just a set up for a bong-rattling Sand. We got a rare first set Sand and they squeezed as much funk-inspired jamming as they could into a ten minute spot in the middle of the set. During Sand, a spun out sorority girl asked me if she could have a toke off my one-hitter in exchange for a cigarette. I said yes, and I don't even smoke.

Limb by Limb featured Fishman doing another impression of three African drummers. Page continued to spread the funk with an inspiring Sneaking Sally, but it was the mini-vocal jam that really fired up the crowd. Gordon got to do a little country Phish with Uncle Pen, before a highly unpredictable turn (the theme since the show began) into Pebbles and Marbles. I was not the biggest fan of Pebbles in the 2.0 era, but definitely enjoyed the acoustic version at Festival 8. If they were going to lose any of the crowd -- it was going to be with Pebbles -- but the band pulled it off and convinced and skeptics that they were going to smoke the shit out of every song -- heavy hitters, crowd favorites, greatest hits, and even the stuff you necessarily did not want to hear. After Pebbles, we had a rager on our hands.

Expected Cavern to close the set, but we got thrown another curveball when Fish went to his high hat. I lost the coinflip (had Maze in my fantasy pool), and they ripped into David Bowie to end the set. It was good, but I dunno if it surpassed the one I caught on Tuesday in Colorado.

At setbreak, DiscoSis1 said that she say a few drunken frat boys were so schwilly that they ate fries off of the stairwell leading down to the floor. The floor and stairs were drenched with spilled beer -- the result of heavy drinkers for the majority of the crowd. The line to the men's room ran long and guys decided to take matters into their own hands and pissed in the sinks and the garbage bins in the corners.

The second set began at 10:10 with an unbelievable Crosseyed and Painless. I dunno if it'll translate well into the mp3, but the crowd's energy level spiked exponentially with the Talking Heads cover. Toward the end of the Crosseyed jam, a 2001 tease popped up, but that's all it was -- a huge cock tease -- before the ambient jam returned back into Crosseyed, which kept the crowd dancing hard until they downshifted with Dirt. On paper, that looks totally misplaced, but after that frantic and frenetic Crosseyed jam, everyone (especially the band), needed a breather for a few minutes before they returned to the mayhem with Fluffhead. The Charleston crowd lapped that one up. The entire weekend featured a selection of greatest hits and Fluffhead headed the top of the bill. After Fluffhead ended, I was shocked that the set was only three songs deep because seemed like they had been playing for much longer.

2001 was teased the day before and even earlier in the set, before the boys summoned the mothership. A dance party floor quickly spread on the floor, as a got doused by beer again. At least this time it was cold. If 2001 wasn't enough, it segued into Tweezer to maintain their momentum -- which seemed invincible at that point. Caught a few Crosseyed teases in a funky, yet not too deviant Tweezer. Just like Dirt, things had gotten a little too feisty, and they needed to simmer things down. Show of Life has been growing on me with every listen. It was a necessary compliment to the relentless dance party that had no signs of ending soon with YEM next up on the menu. The crowd, at least the floor, held onto every note of YEM as it anchored an overwhelming seven-song set.

Charleston was blessed with a three song encore. Everyone knew that Tweeprise was on its way, but would they play 2 or 3 total songs for the encore? Trey stepped up to the mic and said, "Hey Page...where've you been?" and they jumped off with I Been Around, and if any of the Phishy chicks weren't damp already, Page certainly took care of business. I was pleasantly surprised with Quinn the Eskimo, which insured a three-song encore. Page was kicking ass and taking names with his jamming on the Bob Dylan cover that re-emerged at Telluride this summer. As expected, Tweezer Reprise capped off the show on an ultimate high note and held to the maxim of the first rule of show business -- always leave the audience wanting more.

I haven't seen a show this tour when I was more excited to listen to the highlights of the show immediately afterward. But that's the magic of Saturday's show, which is one of those examples that fall under that category of "more proof why you have to see Phish live."

Phish absolutely turned two Charleston greatest hits-slanted shows into a noteworthy rager. Saturday's show was one of the best I've seen in a while. The double dip in Charleston is on par with the pair of Alpharetta shows and the two up in Alpine Valley. Regardless of where it falls, Phish smoked the shit out of Charleston.