The Phish returned to Rhode Island.

I sat out the last two shows, recovering from the wook flu in NYC, while the boys tore it up in Augusta, Maine and dropped the sleeper of the tour in Utica, NY of all places. I was excited to get back on tour and finish up the last seven shows, including a quartet of shows in Phish's old stomping grounds and returning to their roots by playing college towns peppered throughout New England.

I began my journey in NYC, hopped on a train to Connecticut, and met up with Javier who drove me to Rhode Island. We were meeting up his big his bro, Senor, who has been my partner in crime for over two decades. I caught the 2000 Japan tour with Senor, not to mention countless other Phish and Panic shows in the 1990s. Senor lived in Providence, just one block from the Dunkin' Donuts Center, or the 'Dunk' as the locals called it. You can't ask for a better gift than Phish playing in your backyard. The Sunk was located in downtown Providence, which meant a bunk lot scene -- one of the few downsides to Phish in an urban area. Heads spilled into the various dive and hipster bars on the side streets.

Senor picked Cuban Revolution to pre-party and the tiny Cuban joint was not prepared to be slammed by ravished Phisheads. The scatter-brained waitress and inbred monkey behind the bar sent me on uber-service-tilt and Senor resorted to ordering two cocktails at once in order to catch a buzz. We met up with Worcester Bob, an old school Deadhead with almost as many Phish shows under his belt as me, and we instantly launched into some banter about the Dead. He couldn't stop gushing about the 1979 soundboards that have been circulating, especially the Cape Cod shows. 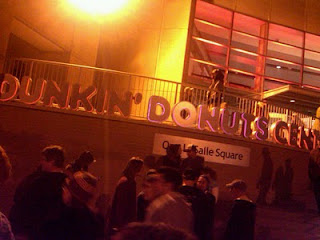 Shakedown was non-existent with a lot of shady characters lurking in shadows of the alley across from La Salle Square, where a band played in a white tent outside of Trinity. It was a bit of a clusterfuck getting into the show and the guy behind me was so schwasted that he puked on his girlfriend's Boston U hoodie. She wasn't pleased. I told her it could have been worse -- she could be standing in line for Dave Matthews with Sam Adams-scented vomit spewed across her hair.

Senor scored us 200-level seats and there really wasn't a bad seat in the Dunk, which held around 14,000 if you included the floor. This was not a GA show and the Nazi-like ushers were keeping the riff raff off the floor unless you had a legit floor ticket. I'm too old to jump over hockey boards when the lights went down, so I just settled into our seats and fired up.

Down with Disease was not your typical throw away show opener. We were treated with an innocent, pristine, and congenial version instead of a gritty mindfuck that they'd cook up as a set 2 opener. Page came out swinging with an eager solo in Funky Bitch. Much like DWD, they kept the Bitch short and tight, but ecstatic. Phish ignited a fire at the Dunk and were not about to let it smolder. They tossed a kerosene-dipped log with Fluffhead. I had to piss so badly and couldn't hold it. Although I returned in time for the "powerful pills" section, I got ambushed by a guy in a banana suit who wouldn't let me pass him on the stairs unless I danced with him. Once I escaped the grips of schwilly banana guy, I got rare goosebumps as the crowd roared the Fluffhead chant.

I could devour Roses Are Free at every show. It was hard to top the Charleston version of the Ween cover, but the vigorous Rhode Island sampling came close. The only low point of the song (and the overall show for me) was the wook dancing next to me (dancing is being kind, more like stumbling into me) who kept clapping out of rhythm during Roses. That dissonance threw me off a bit and I leaned in and asked him for a favor, "Hey brah, can you not clap out of tune?" And he apologized, offered me a hug as a mea culpa, and then returned to his malnourished clapping.

We got our first curveball of the night with a Rift bustout. Crowd lapped it up and Page tore it up, a little foreshadowing that he would be one of the unsung heroes of the evening. Instead of downshifting to a slower tune or a new song, Phish kept up the frenzied pace with a flashflood of lusty funk and Moma Dance -- it swelled up out of nowhere and carried off anything in its path. The boys slightly eased off the pedal during the Ocelot faded-funk jam -- the first time they downshifted and delved into an elongated jam all night. Just think of Sly and the Family Stone on Quaaludes, and that pretty much summed up the deep gut groove.

A speedfreak-reggae induced NICU perked everyone up before a crowd favorite sing-a-long with Sample in a Jar. They appropriately picked Julius to end the high-energy slammin' ass shaking set. From the moment Phish took the stage in Providence, they came out sprinting and didn't let up in the first set from start to finish (with a brief pitstop with Ocelot).

The second set was one of those journeys when I wish I was tripping balls. I was sober for the show, but I was envious of anyone on a head full of shrooms because the second set was geared for anyone that got sucked down the rabbit hole.

Set 2 opened up with Rock and Roll, a Velvet Underground cover which is a dual-purpose vehicle (Allows Page to shine and let's the band jam out for ten minutes). This one was a little on the short side as Trey took a step back and was jamming underneath everyone (as opposed to pulling out his crank and tugging away while everyone else had to catch up). Trippy glitchy jam out of R&R trickled into a sinister Carini, that included a maniacal mind meld and plenty of UFO lights from Kuroda. Talk about a 1-2 punch for all the acidfreaks.

My Problems has improved and is the newest song to get steady play on this tour. Javier called for Weekapaug because of Weekapaug beach in Rhode Island that inspired the song, and the band delivered. Glowsticks filled the air during Mike's Song. This Mike's sandwich included a Sanity mystery meat, 2001 tease, and a sinister vocal jam (with more UFO lights), but alas they didn't veer off too far from course and jumped into Weekapaug, therby abandoning any notions of 2001.

The crowd got another bone with Suzy Greenburg that included a mutant funk thrash jam. Light got pushed back deep into the set and I could have sworn that Phish opened up a wormhole to let a legion of aliens into this dimension. See below for proof.... 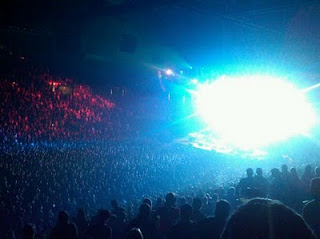 I got juked and thought that Zero was going to end the set. The band had the crowd eating out of its hand at that point and could have easily walked off stage to end the show on a high note, but instead slammed on the breaks and launched into 2001, which definitely caught the crowd off guard with a compact yet ground shaking version. The set began with Page ripping up a cover and ended with a cover. 2001 and Loving Cup were unexpected gems at the end of the set. You know it's an intense set when Mike's Groove isn't the highlight. The top of the set (Rock & Roll > Carini) represents some of my favorite aspects of dark Phish (and yeah, I'll say it again, I wish I was tripping balls for this show), but they ended the second set with three heavy heavy hitters. How do you end a show after a frenzied first set and thickly layered second set? First Tube... of course. Trey jumped up and down as per usual as they tossed the final cherry on top of a well-balanced sundae.

We headed outside and the tanks were strewn in LaSalle square. Hissing sounds echoed everywhere as people rushed to get their hands on hippie crack, on sale for 3/$20 until the cops busted up the party. The random bars surrounding the venue quickly filled up, including a few strip clubs, something that Providence is notorious for. (By the way... remind me to tell you the story about the first time I went on Phish tour with the Joker and we ended up at a strip club in Canada. But I don't have time for that tangent, but I'll definitely include it in the Phish book.)

After the show, we ended up in the back of a dive bar and bore the brunt of one pissed off bartender who was struggling to handle the onslaught of lunatics, aliens, and other escaped patients from the local mental hospital. At that point the night got a little fuzzy and muddled. A few hours later, I woke up on the floor of Senor's apartment. I had to check twitter and my CrackBerry pics to piece together the last bits of Friday night.

On Saturday morning before I sat down to write, I headed out for coffee and wandered across a parking lot adjacent from the Dunk. Here's the aftermath of Phish... 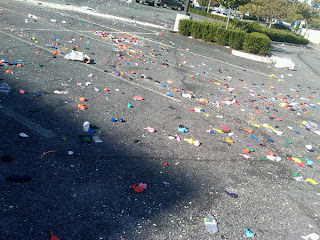 As the song goes: "We're coming to your town...we'll help you party down."