Night two of a three night Phish run is almost always the best show of that trio, because the second night, the band is familiar with the venue and more importantly how they sound with all the odd nooks and crannies in that room, plus they get to wake up in the city that they are playing so they do have to worry about the rigors of traveling. And if they don't bring it for night two, then you know you're gonna get that rager on night three.

I spent Monday catching up with a buddy from Vegas, JW, who relocated to Colorado after souring on the poker scene. He took Nicky and I to Jack's & Grill, where I got my ass handed to me by the jumbo bacon burger. Couldn't finish it and had to tap out.

The costume theme for the night for the Coventry Crew was Euro Trash and/or Dance Police. As you can see, it was well embraced... 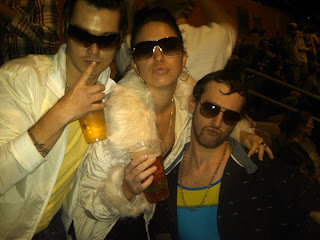 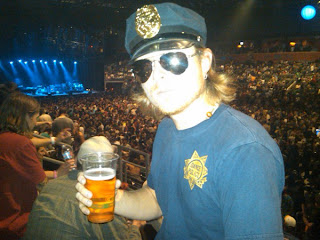 Patrolman Jonas
Jonas hooked up a limo for all three nights. We had a much cooler driver than Sunday. The first night we had a NASCAR-driving humorless driver that could have an extra on The Sopranos as Goomba #2. Monday night we had "Cowboy Bob" at the helm, who must have been over 70 years old. He didn't care about the smoke and I'm pretty sure he got us lost on the way to the show, which gave everyone an extra few minutes to pound as much champagne and booze before we arrived at the lot.

The Joker waited out front of the venue for his lady friend, Rose. They saw a random dude sprint out of the venue with security running after him. The guy (presumable gate crasher) took a spill in the VIP parking area and popped right back up with security still in hot pursuit but gaining ground as they disappeared into the crowd. Just another day at the Phish.

I skipped Shakedown and went inside to scout out seats. We met a couple of Coventry readers in the row behind us -- Sam from Wyoming was seeing just one show this tour and rocking a Tweezer lot shirt. You knew what he wanted to hear.

Lights went down at 8 on the dot. Standard Jim opener, followed up by Foam, which seemed like warm-up pitches before the the show finally got cooking with Back on the Train. We got an infusion of the Roid Funk, just like they busted out the night before, and this batch spilled into Wolfman's. Katie must've liked it because she continuously slapped my ass during the tune. I was mesmerized by CK's lights as the Wolfman's jam that took flight. Sometimes I often wonder which came first -- the lights accompanying the music, or the music accompanying the lights? Page rolled up his sleeves for some heavy funk benchpressing with his Clavinet. I dunno which music magazine writer said it, but one of my fav quotes from the summer tour (in a review of Deer Creek) was "Phish is for people who love the Clavinet and Ketamine."

All of the freaks who live/die for Reba got their wish with a savory version, and it more than satisfied the rest of the crowd that lavishly fed off of the layered energy produced by the 1-2-3 punch of Back on the Train-Wolfman's-Reba. During the tail end of Reba, I could smell the nasty aroma of someone a few rows behind us getting digital with deemsters.

Halley's Comet is a semi-regular in the rotation these days, but only in short high-energy bursts which always tilts me because whenever we get grooving, they abruptly halt that jam and rip into something else. In this instance, I had zero complaints as they dove into Tweezer. Sam from Wyoming got his song, and this contained a bunch of Trey "chaka-chaka-chaka" riffs. I usually like my Tweezers deviant and menacing, but this one was a bit fluffier and they held definitely back (maybe because it was a set 1 Tweez?).

"Keeping it safe," remarked Jonas, "But it's good. Real good."

Gordo fronted a new tune What Things Seem, which is a bit bluesy, especially on the piano end. There's plenty of room for Trey to stretch out and channel his inner Clapton. I dug this new tune slightly more than the debut of My Problems on Sunday. Still needs work.

I'm glad that Coil didn't end the set. It seemed that way until they gave us a bit of a fake-out and instead of ending after Page's silky solo, they launched into a searing Marco Polo version of Antelope to cap the 90-minute set. The last time I saw Antelope at Jones Beach, some crazy mofo dove off the top of the upper deck. No casualties this time well at least no one jumped from the "box seats" that encircled the top of the tiny arena. A couple in front of me were frenetically dancing and actually convulsing like at a religious revival. Who said Phish isn't a cult?

At setbreak, I discovered that a friend of a friend got popped on the floor by the local pop-po for doing dippies. I hung out in one of the many bars/lounges in the venue and watched the Jets-Minny game with a dozen or so other football fans, and one spunout chick who just liked watching something sparkly.

Second set opened up with a TV on the Radio cover of Golden Age. I caught it in Albany last fall, and just like in Albany, this indie rock cover came out of nowhere. My favorite part was the pulsating groove just before they slowed down the jam and meandered into Piper. The Joker was on the floor with his disco ball helmet, and CK5's lights bounced and reflected off his head whenever he jumped up and down during Piper. Didn't have to wonder if he was having fun. The end of the Piper jam contained a few Trey chaka-chaka riffs as they slowly shifted gears into the discofunk, and took a sharp turn with Camelwalk. Giddy up.

Alaska killed the momentum of the set. Whenever I get bored, I watch either people dancing or the lights. The yellow lights were sultry, but as Nicky described, "It was as though Trey was getting off, but the crowd wasn't."

That all changed with Gotta Jibboo. Gordo took control which allowed Trey to "noodle" around a bit, but this time the crowd was getting off of his soloing. Everyone seemed hooked in for Jibboo.

I saw the Joker quickly leave the floor and head to the bathrooms during Velvet Sea. Yep, that's a vintage "Joker Takes a Piss Song." I've only left a Phish show during the encore one time -- and that was with the Joker at SPAC in 04 (I never saw him so disappointed with an encore that he packed up his things, so we went to rage in the lot).

Hearing Twist gave me flashbacks of 99-00 tour with the trio of Jibboo-VelvetCheese-Twist. Soulful playing from Page. Gordo these days is like Charles Oakley from the NY Knicks teams of the 90s -- he was the glue that kept everything together, hustled after every loose ball, never backed down from a fight, and muscled his way to the hole if need be. Oakley's contributions were often overlooked in the boxscore, and for most of Phish's career, I've often felt the same about Gordo. The Colorado shows revealed that comparison more than ever.

Fluffhead had a few flubs and they almost stumbled their way across the finish line -- yet still finished out in front. It might have not been pretty, but the last 90 seconds of Fluffhead had everyone reeling. They should've flip-flopped Backwards and Fluffhead. I got the sense that anything would be tough to top the last bit of Fluffhead and they should have scurried off stage at that apex. Instead, the band got a lukewarm reception to Backwards. It wasn't a bad version and had a decent jam out, but it was misplaced in the set. They the song placement right in the first set (Coil, then Antelope), but misclicked on the closing set.

Sleeping Monkey is one of those songs that starts out slow and builds up to a rocking jam. It would have been weird to encore two Stones tunes in a row, but I kinda wanted to hear Shine A Light. We knew Tweezer Reprise was coming and it met all expectations.

As I walked out of the show, I overheard someone say, "Have you ever had a better Monday than this?"