Phish had not played in New Hampshire since 1993, slightly odd considering it bordered its home state of Vermont. Alas, weird things like that happen, but New Hampshire made the cut for this fall tour as Phish continued their barnstorming of smallish venues through New England. In Manchester, Phish took center stage inside a minor hockey league arena and played in front of an unusual mix of Boston heads, curious locals, and lots of phamily from Vermont. The result? Another unpredictable night filled with bustouts, classics, deep cuts, and a couple of heavy jam vehicles.

Senor and I drove up to Manchester, or ManchVegas as some of my friends called it. Senor booked us a room at a hotel next door to a minor league baseball stadium. In fact, our room had a view of the entire field. We made our way down to Elm Street and found a sports bar to grab grub and booze up. Senor waited on one of his buddies from Boston and I met up with Nyna, one of the oldest friends of DiscoSis #1. I hooked Nyna and her hubby up with my extras and they were excited to see their first show since Coventry.

I randomly bumped into Kid Dynamite on Elm Street even though we were supposed to meet up. Wandered over to a mini-Shakedown, which had a totally sketched out vibe with tanks hissing in the shadows, Massholes huffing balloons, and lots of high school kids looking to get lit up.

A spaced out girl from Vermont wandered up to KD and said, "You're good looking. You should meet my friend." She darted into the crowd to retrieve her friend, who was just as spaced out. KD didn't know what to make of the aggressive Vermont girls in the lot.

Kid Dynamite scored us tickets four rows off the floor in section 106. Not too shabby, with handful of jailbait high school girls in our rowdy section. The lights went down and the night's journey began with an unexpected cover of After Midnight. I got flashbacks of Big Cypress and the Millennium show. Trey channeled Eric Clapton (yes, I know it's a JJ Cale original, but popularized by EC). The sound mix inside the venue was the most perfect, but Trey's guitar was loud and clear as he ripped it up.

A couple of older heads in my section picked up on Sloth within the first few notes. When it was finished, the audience gave the band a raucous cheer. They were even louder after the Alumni Blues > Letter to Jimmy Page > Alumni Blues bustout. A few friends sent me texts and said that was a sign that they were going to play Zeppelin for Halloween. I dunno if that's the exact case, but the crowd was fired up after Alumni. I have never heard a crowd cheer louder for Phish since the Hampton reunion shows.

Bob Marley's Mellow Mood included accompany background "Ooooooh ooooooooh" vocals from the crowd, even though Trey was a little late on the second verse. After a bit of reggae Phish, Trey consulted with Gordo and Page about what to play next. It almost seemed like a quick negotiation after Gordo apparently shook off one of Trey's songs. They settled on Access Me with Gordo on lead vocals and Trey noodled weird shrieking notes that sounded like dolphins fucking.

The crowd lost their mud over Llama, especially the Penguin Guy who was dancing in the aisle near us. Trey called out "Leo!" before Page delivered a sensational solo. All of These Dreams is a classic 2.0 Pauly Takes a Piss Song that seemed a bit oddly placed, but at that point, a slow song was due up anyway. Dreams was a definite slow down tun compared to the Llama heat. The boy picked up the slack with The Curtain With. I kept thinking about how that was the last song in Coventry...and at the time it was going to be the last Phish...ever. That versions sort of an emotional rollercoaster, but this one was tighter, sharper, and surprisingly beautiful. I dunno why I scribbled down that word (beautiful) in my notes, but that's what popped into my head at the time.

Scent of a Mule featured Page pecking away like madman Victor Borge. Senor went nuts over the Jewish section. The high-powered version did not too have too many flubs. 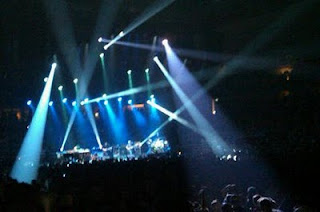 Light during Mule
I Heard the Ocean Sing cropped up out of nowhere. Had no idea how/why that got tossed into the mix. I wasn't really into the song and bailed for the bathroom. The hallways were super slippery and I took a slight tumble. Yep, I fell, but popped right back up to continue my sprint to the pisser. Fitting that Ice was up next as soon as I returned to my seat.

At the start of Walls of the Cave, one of the guys next to me called the second half of the set a trainwreck. I could understand how some phans would not jive on the disjointed set that included a few deep cuts and bustouts, but, I also understand how some heads could go apeshit over some of the rare songs that were played -- especially all in the same night. That's the beauty about Phish -- it is what it is and more often than not, it's never the same for you and me.

The best part of WOTC is the "Silent Trees" section which has always been the part that I eagerly await as Trey's "borrowed" Rock and Roll-like percolates into some serious thrash jamming. They ended their set (around 90 minutes) with a Silent Trees jam that accumulated into a volcanic eruption to end the first set.

I met up with Eric at setbreak, snuck Senor into our section, which was no easy task considering we had a Nazi for a security guard. He even muttered in a Bavarian accent, "Can I zee your paperz?"

If you didn't like the first set, well then the boys made it up to you after they really smoked the shit out of the second set. I couldn't find any lulls in that set -- it kept going and going -- from the moment they kicked off with a invigorating Possum. The Light jam had a couple of savory moments. KD and I watched the weird balloon guy, who kept blowing up those long ass balloons and releasing them into the air. The Light jam out got a bit funky and I was hoping for a Tube, but it raced right into Mike's Song. The crowd went berserk for a reason -- it was one of the better versions I've seen considering I thought was going to be impossible to top the Charleston smoker. Anyone with a glowstick hurled them as a miniwar popped up. Someone with a bubble machine flooded the air with bubbles, and CK5 lit up the arena with a series of sultry red lights. They didn't stray away from a tested formula and seged into Simple, which was smooth and super mellow with accompanying yellow lights complimenting the subdued jam. The mood quickly switched after a couple of familiar reggae licks that indicated Makisupa Policeman was waiting ahead. Trey made reference to smoking nugs and I wondered if Big Red dragging a little weed these days. Phish gave us a brief taste of Makisupa before they smoothly slipped into Night Nurse, and eventually jumped back into the end of Makisupa.

I got my first non-Colorado Wedge in a while. I'm sure that's not correct stats wise, but it just seems as though I hear it every time I'm at a Colorado run. KD pointed out the flasher toward the end of the song. She got up on someone's shoulders and showed her boobies to Trey. Anyone have a vid of that floating around?

A thick and richly layered Wedge morphed into a faded-funk intro for Ghost. I was really sucked into this gritty version, and I can't really say why, for some reason it just grabbed me by the balls and wouldn't let go. It drifted into a trancey jam and then jumped off into Mango Song. Page was the hands-down MVP of Mango while pounding the ivory keys with such force that I thought his piano was gonna break. The jam out of Mango seemed a bit off. I dunno if it was rushed by Trey or what, but they kinda stumbled into Weekapaug. Bottom line is that they got there. And man, what a stunning version that included more teases than I can remember (I heard "I'm a Man"), a mixture of some Ghost lyrics, and even an unexpected segue into something that was like a Llama Reprise. That jam out of Llama might have been the craziest of the evening. They ended the set on the crest of the highest wave of the evening.

I wondered if the After Midnight opener was an indication that they were going to be rocking out way past 12. Surely they'd try to top the evening with a duo or trio of songs, right? Nope, instead they played a single song encore of Show of Life. Both KD and Senor thought the second sets were incendiary but the encore was a let down. I didn't mind hearing it, but how could I argue against Show of Life along with a second or third tune?

Phish's return to New Hampshire was a mixed gift bag of goodies -- something for everyone -- especially several throwback songs geared towards some of their oldest and closest Vermont phamily. They ended the New England run hitting a dozen or so high marks during the four shows I caught, which bodes well for everyone heading down to Atlantic City for the Halloween shows. Last year, Phish ended a 10-week hiatus with the Festival 8 shows. This year, they are coming off of a slamming tour. I prefer to walk into Phish shows with low expectations, but it's gonna be hard to quell my frenzied anticipation as we all count down the hours til Halloween.