I Don't Give a Fuck, That's the Problem 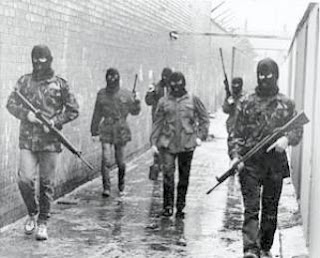 Who knew that MC Ren was such an astute observant of my vacillating view on politics. I don't get involved in debates and arguments, because those are futile. I'm more of a man of action. I can get behind a movement whenever they are really trying to bring about change -- and none of this fake change that so many friends swallowed in gallons when they drank the Obama Kool Aid (and saw a savior who was nothing more than a puppet for all his Wall Street buddies -- which is why I'm perplexed when the folks on the right stirring up paranoia that Obama is turning America into a socialist state when he handed out billions in welfare checks to banks, insurance companies, McDonalds, and dozens of international corporations... oh, and I almost forgot about using our tax dollars to bail out foreign banks without our consent), and I'm definitely not buying into those teabagging movements because most of them were cleverly rebranded stalwarts from the GOPs.

What concerns me is the whispers that the former members of the IRA (Irish Revolutionary Army) are ready to blow shit up -- especially banks based in London. Ireland is under an economic shit storm with rampant unemployment and property prices plunging when their real estate bubble burst. The Anglo Irish Bank had too much exposure gambling on loans to developers. It became nationalized (sound familiar?) with total bailouts funds around 30 billion Euros. Ireland is in deep trouble, and the EU and IMF bank offered them bail out packages. Once the IMF steps in, historically speaking, the country is doomed because of the ridiculous interest attached to the loans and other harsh realities of their iron-clad austerity packages. That's what Bono has been on his soap box rallying against the last few years -- to make the IMF absolve loans to third world countries (Africa and South America) who spend most of their GNP on juice from those loansharks. Now, Bono is going to have to beg the banking elite since Ireland is on the verge of becoming a third world country.

The citizens of Ireland are outraged and on the verge of civil unrest because their politicians sat around and did nothing but shovel money to the banks. Sound familiar? Bankers got funds. The people got zilch. Now, the government is about to sell them into slavery with the IMF. Instead of attacking British tanks like they did in the 1980s, the rogues that used to be in the IRA are dusting off their bomb making materials and hitting the banking industry. Man, if word gets out that the Irish are blowing up banks, what will the reaction be in America?

When I was a kid growing up in an Irish/Jewish neighborhood, that's all you would heard about -- the IRA. At some point in the 1970-80s, if you drank a pint in any Irish pub in New York City, chances are you were helping launder money for the IRA. There were rumors that the "second collection" in our Catholic parish often went to buy arms for the IRA -- to help eradicate the Protestants in power. Right after 9/11, there's was a huge backlash against taxi drivers and bodegas, because the fear mongerers warned that every newspaper you bought from a brown person or cab ride contributed to funding the American Jihad.

The truth lies in the middle. I'm sure there are a handful of bodegas in the New York Metropolitan area that send money to mosques somewhere that teach anti-American rhetoric. And yes, in the 1970s, it's was well documented than many bars sent their proceeds to Ireland to help their Northern Irish brothers and sisters break free from British rule.

But what about today? Every Irish Car Bomb you drink at the local bar helps fund another bank getting blown up in London.

When I was a kid, we didn't have as many outlets to obtain news like we do in the internet age. We were stuck on news cycles -- the early morning paper or later morning paper and the evening news. That's it. The only 24-hour news outlet was on the radio, and that was about the only medium that you could tune into that gave any sort of news around the clock. If you weren't religiously glued to that dial, you had to wait until nighttime to turn on the boob tube to watch the local news and then wait for the national news which slotted a few minutes for international stories. Sometimes they talked about Northern Ireland. I occasionally got a glimpse of the ravaged streets of Belfast, where citizens clashed with Brits often throwing rocks and homemade bombs at Her Majesty's soldiers. My non-Irish mother would often toss in a barb at my Irish-father, "Those micks are never going to win because they are so drunk they don't know they are using rocks to fight against armed soldiers." My father was never one to get into a heated political argument, so he would silently leave the apartment and head down to the Leprechaun, the corner pub. Who knows for sure how much his drinking habit had indirectly funded the IRA. He was not politically active and didn't care about "The Troubles" in Ireland. Both my father and grandfather were born in America and neither had ever visited the Emerald Isle.

If anything, my father (a former U.S. marine stationed in Germany) was more concerned with a potential two front war -- with the Russians and the Iranians. I grew up during the Iranian hostage crisis and images of bounded Americans with pillow cases over their heads appeared in the newspapers. In 1980, my father was worried that if the Russians didn't bomb us, then we'd get bogged down in a Vietnam-type of war of attraction in the Middle East.

"Those religious zealots in Iran," he said, "are the real threat to your future."

Those are some harsh words for an eight year old.

The Berlin Wall would topple within a decade of that conversation and the Russians were no longer a threat. But never underestimate the wisdom of an alkie. My old man's prediction partially came true -- thirty years later, our troops are bogged down in a hundred year holy war that might never end, and to complicate matters there are rumblings that the next front will open up in Iran.

Talk about a bad idea. Our country is broke and we simply don't have the resources or man power to invade a third country in a decade. And let's not forget the hobbit despot in North Korea. Depending on which slanted-coverage you read -- the latest clash between North Korean troops and South Korean military doing joint exercises with the US -- is the others' fault. It football terms, it's an offsides call. But we don't have an impartial referee to determine if we're offsides or they encroached us. One thing is for certain, that's one skirmish we can't afford to get involved in. We already fought one proxy war with China in the 1950s. Do we need another 60 years later in the middle of fighting a holy war?

As one political writer chastised one of his knowledgeable readers in a recent post, "What do you mean you're worried that WWIII is going to start? It's been going on for nine years."

There's plenty of facts. The hard part is connecting the dots. The media used to help citizens connect the dots, but these days, you can't really trust anyone in the mainstream media -- because they have strayed from journalistic integrity that made them the Watchers and true guardians against those misbehaving in power. So many media outlets have their own agendas that come first before servicing the people -- solely operating to generate income, or act as propaganda wings for parent corporations, and/or influence public opinion for well-connected politicians and intelligence agencies.

That's why it's really up to the individual to do their own due diligence. But there's too much stuff that's it's overwhelming, so the end, you have to do your own homework. There's a quote that stands out a lot when I think about the vagaries of the media business...

"There's my side. There's your side. Then there's the truth."