Anatomy of a Drunken Saturday

I went to bed angry, pissed off, and ready to punch holes in the wall. A lot of it had to do with finding out something the Nicky had been hiding from me -- someone owes her money and has yet to repay it back, and she was worried that I would bust some skulls if I discovered what happened. She's right. I was livid, but she was willing to write off the debt as "the price of doing business in poker." I told her it was bullshit and that I was going to take it upon myself to make that person pay with interest or pain -- whichever comes first. No wonder she kept it to herself.

I was also in the middle of figuring out who owes me what. I have a running tab of outstanding debts from friends and clients and had updated those for my records. It's sort of like the reverse Santa Claus and I made a list of who has been naughty and nice. For the most part, everyone has been naughty. In this day when times are tough, it's hard to pay back debts. And my problem is that I'm more than willing to let folks float past due payments for a bit. I'm trying to be reasonable and understanding and sympathetic to their cause, but I grew furious when a few folks take advantage me. Case in point a handful of clients who still owe me thousands of dollars in back pay. Maybe I should talk to Vinny the Barber back in the Bronx and ask him for his help in collecting debts. Sure, I'd only see a small percentage of what's really owed to me, but I'd get the satisfaction that shady figures would be sharing the bejesus out of those delinquent fuckers. Plus a bloody nose or two never hurt anyone.

So on Friday night, I was not in the best of head spaces when I wanted to crash. I had barely slept since I got back from the Bahamas and desperately trying to catch up on three weeks of work inside of three days. I pushed myself and was worn out, but still had a shit ton of work to do. If I didn't force myself to sleep, I would have pulled an all nighter in a foolish attempt to catch up. Alas, I turned to sleeping aids.

I usually take one blue Xanax pill to help me sleep. I usually don't have problems sleeping -- rather, I have issues with waking up in the middle of the night and unable to fall back asleep with a million thoughts and ideas racing through my head. Xanax helps in that department because I'll wake up groggy and roll over to fall back asleep. That's the difference between 2.5 hours of sleep and 5 hours of sleep.

When I need 6 or more hours of sleep, I take two of those blue pills. That locks me in for at least 6 hours and sometimes as much as 8 or 9. Because I was pretty amped up and pissed off, I had taken two and nothing happened. I was still wide awake. That's when I took a third. I passed out hard.

Mr. T would probably pass out on two. It would take three Xannies to knock out a professional football player (definitely four if it was an offensive or defensive lineman). It's not my weight that is an issue but my tolerance for downers. In the immortal words of Bill Clinton, "I am bulletproof."

Well, almost. Three hit me hard. I wonder if four would let me sleep for 12+ hours. It's scary because I have friends who can sleep for 12 hours fairly easily without any sleeping aids. I'm envious. Sometimes I don't get 12 hours of slumber in a single week, let alone one day.

When I woke up to take a leak on Saturday morning, Nicky was awake. That never happens. Usually I'm, up way before she is, but the triple dose knocked me on my ass and I slept late. She explained the hysterical scenario of me trying to get up under a thick Xannie-haze because I don't recall a thing about it and was essentially sleep walking.

"You woke up, stumbled to the bathroom and almost fell over a few times," she explained. "You crashed into the wall once and almost fell over while taking a piss. You wanted a tissue, but there were no more tissues in the empty box, so you tore it in half and threw it into your office before muttering something and walking into the kitchen. I asked if you wanted me to pour you a glass of water, but you mumbled something to the effect that you can do it yourself. That's when you grabbed the jug and drank straight out of it. Then you stumbled back through the living room, knocking into the wall a few times and went back to sleep."

I don't recall any of that, but, I gotta trust her. Luckily Nicky didn't film it and put it up on YouTube whereas I'd have my own version of an embarrassing video on par with the now infamous schwasted and shirtless David Hasslehoff trying to eat a sloppy Wendy's burger. 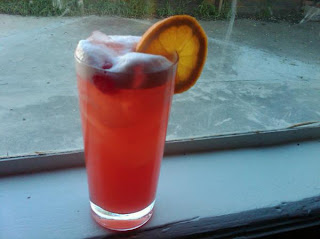 So when I finally awoke from my coma on Saturday, I was still super faded. Nicky was hungry and suggested we hit up the coffeeshop. It's always crowded with hungover hipsters at noon, but we luckily got a booth. I was still so faded that I was wearing my sunglasses through the entire meal. I also ordered something weird that I never get. Afterward, I told Nicky we needed to drive to the supermarket because I wanted booze.

I never drink at home. Maybe the occasional beer when we have company, but I'm not a home-drinker. However, I had this vision in my head of making a Bahama Mama from scratch. Nicky loved the rum based cocktail after trying it for the first time in the Bahamas. I checked my Crackberry for a few recipes and discovered a dozen, but they were all different. I decided to pick up ingredients that I saw the bartenders in the Bahamas using -- different fruit juices and two types of rum (dark and coconut based). I picked up pineapple juice, cherries, and also found a huge ass jug of Hawaiian Punch. Man that gave me flashbacks of my youth because that's what I drank as a little kid. I figured if I fucked up my homemade Bahama Mama recipe, then I could always resort to making Jungle Juice, or something I did when I was in high school that involved a garbage can, cutting up pieces of fruit, ten cans of Hawaiian punch, and two jugs of the cheapest rum we could find.

I got back home and went to work on mixing drinks. I kinda missed my days as a bartender because I was having fun. I nailed a Bahama Mama on the first try.

Simple recipe: 2 shots of Malibu rum, 1 shot of dark rum, pineapple juice with a splash of Hawaiian punch...mix well by shaking over ice... garnish with orange slice and cherry and serve with ice. Umbrella optional.

Nicky was impressed with the pinkish color and delicious taste. It was a success, which set the tone for the rest of Saturday. Heck, it wasn't even 2pm and I was still faded and now beginning to get drunk on pink rum cocktails.

I drank steadily through the afternoon and even wrote a bit, nothing of significance (and definitely nothing in the freelance department because I'm on strike until I get paid the money owed to me), but I felt like Hemingway crocked to the tits on rum on the few things I managed to scribble down. I re-watched Exit Through the Gift Shop because Nicky had not seen the confusing and thought-provoking documentary on street artist Banksy, and I watched it from a different perspective (dubious and treating it as a hoax). Alas, Banksy is a post for another time.

With the triple dose of Xannies still pumping through my veins, I was drunk and faded so I also took a nap, got laid twice, read four chapters in two different books, bet on 2 NBA games (I lost one of them) and 1 college hoops game (another loser), ate Mexican food for dinner, and then watched The Green Zone while whipping up at least six more cocktails.

For a day off, it was quite busy. I began to question why I even push myself as a writer? I should drink more, right? And enjoy life instead of writing bullshit fluff pieces about poker. (By the way... I write this while counting down the minutes before I whip up another batch of cocktails.)

By the time I crawled into bed around 2am -- I was hammered. I drank as much water as I could and prayed that I wouldn't have one of those Bahamian hangovers.

Well, now it's Sunday morning and I woke up early super excited for the football playoffs. The Jets made the "final four" and if they can win one more game, they are going to the Super Bowl for the first time in my lifetime. I had a mild hangover, went to the coffeeshop for breakfast, then drove back to the store to load up on snacks for the game and more pineapple juice and rum!

Looks like I'm gonna get sloshed again today for the football games because I get too anxious and have to eat pharmies. With the addition of an IV-drip of rum, I doubt I will write, but might drunkenly spew my faded-rum-drenched thoughts on Twitter (@taopauly).
by Pauly at 1/23/2011 01:43:00 PM