Yesterday was a weird day. I woke up planning on editing the novel, but I had a gut feeling that something else was going to be brewing. I quickly scrapped all plans to lock myself in the office and I began the process of setting myself up to sweat two huge moments at prime time -- one was a basketball game and the other was the quiet before the storm in Egypt. 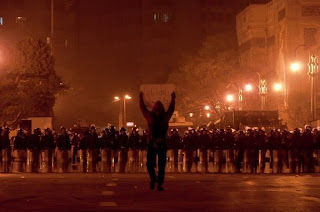 It's no secret that I've been diligently working on Tao of Fear more than Tao of Poker these days. The major factor is that I'm simply more interested in the topics (revolution and finance) than writing about the "genius of poker players." I know that poker is the hand that feeds me and pay my bills while allowing me the freedom to fund my art projects, but sometimes it's hard to get fired up to write about the absurdity of spoiled shit stains playing a card game, when there's a revolution in North Africa happening right under our noses. Call it regime chances, democracy, or revolutions -- the masses are finally standing up to the power elite.

We're witnessing a battle between the haves vs. the have nots. The ruling class knows that they are outnumbered (The top 1% own 95% of the wealth) but purposely divided the masses in order to have them in-fighting amongst themselves instead of turning against the plutocrats it charge. That's why we're saddled with race wars, religious wars, political wars -- mere distractions to get the sheeple biting themselves. It's easier to have Americans turn on each other with that cleverly-designed Red State or a Blue State mentality and have us bitching and moaning at each other living up to our neo-branding and liberal/conservative labels, when the entire time the bankers and corporations pulling the strings on our puppet politicians are exhaling sighs of relief that the American sheeple are more focused on Snooki, the Super Bowl, amassing Facebook friends, and getting into Twitter spats with political frenemies.

After seeing the events in Tunisia, Yemen, Algeria, and Egypt -- why aren't we marching in the streets protesting the outrageous atrocities that our politicians have committed? Well, we're too apathetic and distracted. Meanwhile everyone stands on the side lines calling each other names, while the curious ones try to do what they can to find out their own information about the uprisings in Egypt. That's why the Tao of Fear is important. I never realized its significance (aside from a few chuckles at Wall Street inside jokes) until now.

So if you're looking for coverage about Egypt or other North African revolutions, then head over to Tao of Fear. I linked up a few websites that are writing stories and articles about it. I posted a couple of videos as well.

While all of the events in Egypt unfolded last night like cutting off the internet completely, I was trying to break a horrendous losing streak betting on sports. I did my homework and picked one team out of the dozens of games being played. St. Mary's was the one that I thought I had the best value.

"Where the fuck is St. Mary's from?" asked Nicky.

I liked St. Mary's to beat Gonzaga outright even though the were a 2 point underdog. When I went to put my bet in, the line had moved to +2.5. I loved getting that half a point because in basketball those little things can make or break a wager. I also bet the money line at +135 because I had them to win -- so why would I not try to get more value? With an hour before game time, the St. Mary's line moved in my favor along with the ML figures -- to +3 and +145, which meant that bundles of money were being bet on Gonzaga. I wagered a small bet on the points and ML (hoping that the line would move again before tip off and I can get an even better price, but if it didn't move, I was gonna make another bet at the current line). In any rate, I was just waiting to see what happened to the number. 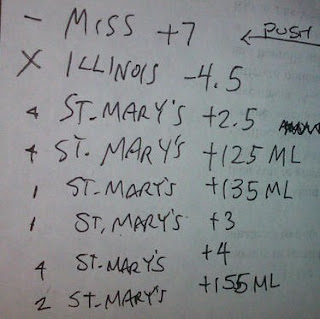 St. Mary's-Gonzaga was the last basketball game (NBA or NCAA) of the night on the schedule. I expected scores of down-and-out losing bettors to act desperate and put the rest of their money on the favorite, Gonzaga, in hopes that they could win back their loses. As I anticipated, with less than ten minutes before tip off, the line moved again in my favor to +4 and +155. I pounced on it, feeling groovy that all the late money on the other side (Gonzaga) was coming from the day's losers. Yep, I was fading the losers and betting on the dog, St. Mary's, who were now getting twice as many points when the line opened at +2.

St. Mary's played tough and kept the score close in first half. When I checked in on them, they even had a one possession lead, but I didn't watch the game, instead focusing on drinking rum cocktails with Nicky as she played online poker in the living room, and I watched the Knicks-Heat game. I didn't bet the Knicks or any NBA games -- I was simply a fan enjoying my team play against LeBron James. Good news for me that the Knicks prevailed. When the game ended, I switched channels and sweated the rest of St. Mary's-Gonzaga. Painful. Excruciating. I hate it when games are so close during crunch time. I kept a watchful, yet horrified eye on the clock, and it couldn't move fast enough. I was ahead by a point but there was plenty of time left on the clock.

I couldn't stomach the last minute of the game and paced back and forth. It felt like I got kicked in the ribs when Gonzaga seized the lead and tried to pull away, but I got a couple of lucky bounces including Gonzaga's unstoppable offensive weapon to foul out -- on an offensive charge of all calls. From that moment, the everything went St. Mary's way, but I was still wary. I figured that my bets with the spread were looking really good, but the moneyline bets were on the verge of collapsing. That was the difference between a small profit and a monster one.

With the score tied and ten seconds on the clock, St. Mary's marched down court and hit a clutch basket to win by two points as time expired. All of my bets hit. I waited ten minutes to check my sports book account and I almost doubled up my roll on one friggin' game. Sure, I had six total bets on St. Mary's but for the first time in over two weeks, I had something to be happy about. The losing streak was officially over and I could now rebuild my bankroll just in time for March Madness around the corner.

I shut the TV off and focused on two Twitter hashtags... #Egypt and #Jan25. From sweating a sports bet, I returned to sweating the revolution. I pieced together some info for a Friday morning post Egypt on Fire. At around the same time, Marissa sent me a Wall Street Journal article about a hedge fund manager that I knew through poker. That piece inspired a Tao of Poker post titled Dan Shak's Hedge Fund Nearly Blows Up the Gold Market.

The last thing I did last night was check up on Egypt. I hadn't slept much all week and desperately needed to crash, but I didn't want to miss the schedule protests on Friday in Egypt. I opted for rest and crashed for a few hours. Within moments of waking, I shrugged off my hangover with a morning breakfast eye-opening cocktail: rum and Hawaiian punch. I fired up my laptop and quickly caught up on the revolution. Since then, I've been glued to my laptop. I turned off my TV because the alphabet news networks are ignoring the story and anything they show will be watered down and censored. So I'm on the net and actually following along with Al Jazeera for their coverage of what they call the "Anger in Egypt."

As one political blogger noted about the lackluster coverage of the Egyptian revolution from American MSM, "Apparently, to get decent news these days I have to watch Al Jazeera. I wish I were joking."
by Pauly at 1/28/2011 05:44:00 PM

Email ThisBlogThis!Share to TwitterShare to FacebookShare to Pinterest
Tags Tao of Fear, Writing