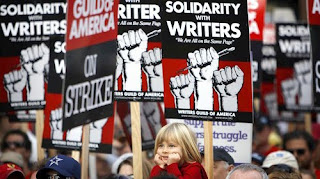 I wish that I was in a writer's union, not that I'm necessarily in favor of unions, but more so for 1) the health insurance, and 2) the ability to mobilize a large group of angry scribes to protest outrageous demands from our employers.

"Why do you think there is a writer's guild (WGA) in Hollywood?" she said. "Otherwise people would work for free. "

As someone who spent almost a decade in Hollywood, she's totally correct.

If a poker writers union existed, then many of my friends would not be out of work. But more importantly, if a union existed and we all went on strike demanding health insurance or timely paychecks, then I could legitimately call out some of my peers who crossed the lines as scabs and rats. You have no idea how ugly it's gotten in the last three years with some slimy fuckers lowballing veteran scribes. The reason that so many companies in poker can get away with paying McWages (a mere pennies over minimum wage) is that too many wanna-be reporters have beenbrainwashed into thinking that the poker industry is the coolest thing in the world since sliced fucking bread. With a large group of untrained workers (many of whom couldn't write their ways out of a paper bag) willing to take 1/3 of the salary, why wouldn't the powers to be hire three scabs for the price of one established scribe? Disposable workers. Welcome to McPoker Reporting. Do you want fries with that chip count?

Yep, poker, like many other industries, is a dirty and highly competitive business where a small percentage of the uber-wealthy people that get to reap the financial awards in this billion dollar industry. If you added up all of the salaries for poker media in the world it would come in at around a million, maybe two million dollars. In a billion dollar industry, where does the rest of the money go?

On an interesting side note, the majority of money earned by poker media ends up getting reinserted into the overall poker economy -- many of them are avid online poker players, buy into tournaments, play cash games, lose money in the gambling pits, and have to pay money out of pocket to eat/drink in casinos/hotels when they are on the road. Dare I say, most poker media are getting paid with their own money.

Another contributing reason why poker writers don't band together is because we're in direct competition with each other. Creative types are jealous, vindictive, and have very little loyalty to their peers, which is why plagiarism is rampant in our business. In the end, as much as a small group of us are a tight-knit family, the rest of my colleagues would cut our throats to get an assignment. And if they are selling their souls for a paltry paycheck, then what's their real motives for undercutting wages? Are they that fucking clueless and don't know how the poker industry really works? Are they total degen gamblers and horrible poker players themselves that desperate for any money to get back in the game? Are they fame whores? Do they want to get close to poker players because they have such low self-esteem that they need to have famous friends?

I often wonder what goes through their minds and it's ugly to think about what really makes some of those people tick. How do they sleep at night?

It's one thing to start from the bottom and work your way up -- and I have the utmost respect for anyone who is willing to take a paltry paycheck and shovel shit for a living in order to break into the business. That's how I started out and built up a career out of nothing. But as soon as I peeked behind the curtain and saw the wonderful Wizard of Oz, I realized how much of a scam the industry is and how poker media is less of a media business as it is a clever marketing ploy. I tried to warn everyone who wanted to work in the business, yet all of my warnings were ignored. Yep, I was just one of many of the nitwits at the bottom of the pyramid scheme. That's why I longed for the days when I was involved in Ponzi schemes on Wall Street -- I missed working for proper criminals.

But when veteran scribes start lowballing you, talking shit behind your back, and fabricating utter lies -- that's when I have a problem with their shadiness. It's got the worst aspects of high school combined with an Orwellian totalitarian state. The most outrageous crimes are committed by the ones hiring expendable sheep. I used to be mortified by the willingness of the magazines, websites, and news organizations to knowingly hire inferior workers just to shave a few pennies off their budgets. But these days it's par for the course. That's a practice that rampant in big business and the (real) media industry across the board and one of the main reason why the middle class is slowly becoming extinct.

Yeah, so trying to rally my peers together to demand health insurance, working wages, and better copyright protection of our work sounds like an amazing idea in theory. But in reality, it's never going to happen. As I stated earlier -- no one would hire us and deal with the headaches involved with a union writer. In addition, I doubt that the majority of middle managers and veteran scribes in my industry are courageous enough to stand up for writers' rights. Gone of the days of true gentlemen like John Caldwell who stood up for his troops against tyrants.

If you're reading this and are offended, well that's a good thing because you should be pissed off. But don't get angry at me, point the finger at yourself. I don't care about offending my peers because I'll tell it to their faces -- you are fucking spineless sheeple and should be embarrassed with yourselves because you are some of the most talented people I've come across and the equivalent of highly trained chefs who are taking min-wages to microwave frozen kangaroo burgers for a living. Continue to allow yourselves to be exploited, or stand up for your rights. Consider this a wake up call and a swift kick in the ass. It's only going to get worse, and by then it'll be too late.

So in the end, I'm up on a sopabox that's ready to crack while preaching to just a handful of my peers, many of who agree with me 100% but won't start a picket line with me. As per usual, I'm screaming into the void and have to take up injustices by myself. I'd prefer if I had a few folks watching my back, but if this is a war I got to fight by myself -- then I will. I'm not afraid because I reached a tipping point. I'm tired getting treated like shit and it's time for action.

If I lose three or four clients and future assignments over this -- then so be it. I'd rather die broke knowing I stood up for something I believe in, that getting pushed around and bullied, and forced to work in the McPoker industry.

Besides... transforming douchebags, bitches, and career criminals into rock stars has run its course. I'd rather write novels anyway.