I'm not much of a reality TV junkie, although I'm fascinated with Hoarders and Intervention, mostly because those are shows about people struggling with addictions and compulsive behavior.

But, you can also bet on it. With six chefs to go in Top Chef All-Stars, I drafted a team against Nicky. This season is special because all the chefs were former contestants who got close -- but didn't win. I bailed after the first episode and stopped watching it. I didn't like the format -- too many clashing personalities. One of my colleagues, Jess, told me to stick with it because the show settled into an good groove. At that point, the show was 3-4 episodes in, but I said I'd give the second episode a shot. If I didn't like it, then I'd only waste an hour. I watched that and I was curious enough to want to watch the third episode, and then I got hooked for the rest of the season and sucked into the drama -- egomaniac artists creating food porn.

I'm not much of an adventurous eater -- I can't stand vegetables -- but the show gives me a chance to explore that realm without actually having to eat it.

Then again, maybe it's because I've been drinking rum while I watched the show?

So the draft...in the past, Nicky and I drafted teams with 10 chefs to go. Using an elaborate point system draw up by Garth, we played heads-up against each other. The winner would get a free dinner at a nice joint in town -- in one of the restaurants affiliated with any former Top Chef contestant. In LA alone, there were five or six places, maybe more if you counted Santa Barbara or the OC.

Nicky got first pick. She rigged it with the Buddha dice -- one of three dice that sits in a sake glass in front of Showcase's Buddha statue (the one that was too heavy that it didn't take it to NYC with him, so we inherited the Buddha). 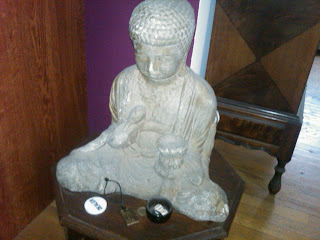 I originally grabbed the Buddha dice to settle a decision for dinner. We narrowed down the possibilities to two places Saffron (Indian food in Beverly Hills) or Gaby's (Mediterranean diner), but couldn't decide. That's what the dice is for. Odds for Saffron. Evens for Gaby's. I rolled against the wall I snapped the die onto the hardwood floor. It rocked against the wall and spun for a few seconds before it settled onto...1...Saffron wins. Snake Eyes equals Indian food.

With the Buddha dice in my hand, I asked Nicky if she wanted to use it to settle on who gets the to pick first draft in the Top Chef pool. She picked odds. I got evens. I handed her the Buddha dice. She tossed it against the wall, but it bounced behind the bookcase. I called "sloppy dice", which would void her toss. She protested. I lost. She grabbed a flashlight and moved the shelf. She couldn't find it at first. Then it magically appeared.

Bullshit. Nicky got first pick and she refused to use the "snake format" where she'd get the first pick, then I got the next two. Alas, I got the 2nd and 4th pick and saddled with the last chef.

I gotta say, I like my team. We're gonna finish 1-2. When I win, I'll get a free meal to whatever Top Chef joint I want in town.