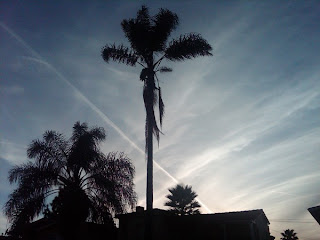 Awoken from a dream. My alarm clock? The conversational chatter from the neighbor across the alley. I stepped outside and looked up. A cigarette snugly fit in between her fingers from her hand that lazily hung out the second-story window. She gripped a land-line cordless phone with the other hand and rapidly spoke in Farsi.

I stopped because of the music. Sounds. Musical sounds of unknown origins. Which one of my neighbors on the other side of the alley were watching a Bollywood musical or blasting gypsy music peppered with Egyptian scales. And was someone actually practicing a xylophone too?

The unfriendly woman in a purple sweater allowed her leashed shar pei to nip at the bottom on my jeans when I walked down the alley. The hashed-out censor in my head muted my scornful thought: "Hey, fuck you lady! Your yapping wrinkled mutt bit my ankle! You're lucky that I don't drop a dime on your ass and report you to L.A. Animal Control as an animal hoarder!"

The heartless twat drizzled a thick, bluish goo into a gurgling laundry machine instead of reeling in her ornery canine. I didn't exist to her. Me? A mere scruffy ghost to my neighbors, maybe even a scruffy goat? No, definitely a ghost. I'm invisible.

Who knows if anyone of my neighbors were callous snitches who answered one of those "If you see something, say something" HSA-funded advertisements that the Military-Entertainment-Fear complex pawned off as each American's Patriotic duty. The entire campaign in the War of Terror became a successful re-branding of Soviet Union-era intimidation tactics against the populous. The intelligence apparatus easily converted your paranoid neighbors into "snooping toms" in order to keep America terrorist-free. They were an additional layer of surveillance in our post-modern digital age and kept tabs on your comings and goings. Domestic espionage.

While continuing to reside in a major metropolitan area, I will NEVER evade the Watchers -- security/traffic/copter/satellite cameras -- for more than a couple of minutes at a time, but even when I'm off the grid temporarily, I'm still being watched by my fellow humanoid homegrown spy network (armed with iPhones, Crackberries Droids, and other tools of the citizen paparazzi), who filled in gaps for the Great Eye in the Sky.

They knew your every move before you made it.

The Eye saw me kick the dog before I sauntered down the street and paused in front of a palm tree. I hoisted my own CrackBerry toward the sky and snapped evidence of the white smudges. Zig-zag. Zag-zig. Across the sky. More chemtrails. More jets. More unknown contents. Aluminum? Unknown? Harmless or helpful? If the smudges over the horizon were helpful, then some slippery politician would have seized the opportunity to steal credit for "saving the world" by curing the ills of out environment, and signing autographs for his best-selling book en route to accepting a Nobel prize (and hypocritically flying first class on Royal Scandi Airlines).

I forgot what day it was. It is.

Fuck. The cluster of hungry hipsters in front of the coffeeshop narrowed down the choices to Saturday or Sunday.

On Satursundays, the undersized pixies in scarves and oversized sunglasses and their douchenozzles boyfriends, clad in plaid-checkered shirts and tight black jeans, all impatiently waited for an empty booth at my small, yet beloved coffeeshop. They hovered and drooled over the outdoor tables filled elderly ladies in hats and pearl necklaces. They wolfed down omelets. Wolfed. Even though the post-Church crowd were spiritually nourished after services, they were still famished in the food department.

At that bewitching hour, the coffeeshop's clientele were divided between: 1) religious Baby Boomers observing the Sabbath, and 2) disenfranchised, spiritually-rudderless Gen X-Y-Z philistines.

Regardless of who worshiped who/what, everyone in search of food had to wait for their place in line. But... not me.

Coincidentally the cosmos aligned perfectly that my faded ass stumbled into the one joint in all of Los Angeles where I actually had some pull. That juice finally came in handy on a slammed Sunday. No wait. I got bumped to the top of the list, a welcomed a perk of a valued regular (good tipper) at a family-owned and operated business -- a true rarity these days. Miserly corporate conglomerates boast about their so-called rewards clubs, but those mega-monsters can't match the residual benefits of a small business who look out for their best customers.

No list. I didn't even put my name on a list. I bypassed all of the hipsters by simply making eye contact with the owner's son (a.k.a. the guy with the list). He nodded and I nodded back. I discreetly passed the drooling hipsters and walked into the back. I slid into an empty stool at the end of the counter. Right above my head, a Eastwood's spaghetti western played on the TV.

The mayhem behind the grill was organized chaos -- nonstop chatter mixed with food lingo and broken Spanish. Much needed communication at the busiest moment of the week. And in a city with "special" denizens, that also meant lots of "special" orders.

The Beatles faintly played on the radio. Penny Lane sounded like a hapless opening act that none one in the crowd paid any attention and talked over, because they anxiously awaited the headlining act -- the symphony of sizzling bacon and sausages.

I never saw anyone work faster than the two cooks. Two cooks, only two. They did the work of eight men. They were octopuses. Octopi. It seemed like 16-arms cranked out a variety of breakfast dishes every twenty seconds. All sorts of eggs concoctions. Fried. Sunny side. Over hard. Poached. Scrambled. One of the prep cooks in the back emerged with a pair of tightly-rolled breakfast burritos. Piles and piles of yellowish greasy potatoes were quickly converted into darkened strands of hasbrowns. French toast. Banana pancakes. Canadian Bacon. Real bacon, but sadly a health-nut ordered that lame excuse of a substitute. Turkey bacon. The methadone of bacon. Turkey bacon.

The lottery winner of the day was the fortunate soul who ordered a swirling maroon and gold plate of Chorizo and scrambled eggs, which reminded me of a Matisse painting.

A young woman with a Rhode Island accent sat on the stool to my right. She wore her pajamas pants, flip flops, and a UCLA hoodie and updated her Facebook status on her iphone while simultaneously tearing apart creamers and dumping them into her coffee. The silver-haired gentlemen three stools down ruffled the pages of a gaunt copy of the L.A. Times. He took a more classy and dignified approach while dressing up for breakfast: a paisley bow-tie and seersucker suit. He looked more like a clarinet player in a Dixieland jazz band who had been up all night playing sets in the basement of a whorehouse, than one of the Bible Beaters grabbing an omelet after communion. The clarinet player sipped a cup of black coffee infused with four spoonfuls of sugar; the only thing keeping him awake and face-planting onto the counter. For me, a strong big-assed iced tea was the only thing that kept me awake. Although a bump of nose candy would have been fine and dandy. In an L.A. diner full of Jesus Freaks and hipsters, the percentages were good that someone was holding cocaine.

A sticky cup of maple syrup became my first nemesis of the day and it made a few pages of a book stick together. Dirty plates scraped against each other as the busboys rushed back and forth clearing off tables to seat the ever-growing line outside. The clattering of silverware and plates (made in China) sounded like a gentle rain. Bright beams of sunlight cracked through the chemtrail-laced fog and blasted its way through the front window. Even though I sat all the way in the back, the sun was so intense that it blinded out Eastwood on the TV. I considered wearing sunglasses to shield myself from the irritating beams.

The waitress whizzed by in front of me with a maroon and gold swirl dancing on a plate followed by its own chemtrail of deliciousness.