I only care about the Oscars because I can bet on it. 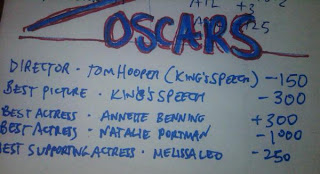 I didn't bet on too many categories. Most of my bets are "chalk" or heavy favorites. I get fucked if there's an upset, but I went with chalk this year because it's basically printing money. You know the saying, "It takes money to make money...", well this is one of those instances because you have to lay out so much money to turn a small profit, that it's only beneficial to a select few.

I like The King's Speech bet because I locked it up at -300 when the lines opened a few weeks ago. Since then, the line moved as it jumped to -1000! I'm bummed out that I didn't bet 3x as much...but didn't anticipate a drastic move.

Best Director was almost a coinflip with Tom Hooper (The King's Speech) at -150 or David Fincher (Social Network) at -175. I guess I was betting with my emotions, in this instance being anti-FaceBook, so I went with the other favorite.

Obviously, I'm hoping that the Academy voters are bigger fans of royalty with speech impediments than social media.

I haven't seen The King's Speech, but if I win both bets for Best Picture and Best Director, I will spend my winnings and take Nicky to see the flick. If I split, I'll go see The Fighter instead. And if I lose both bets -- then I'll sink to a new low and open up a FaceBook account.
by Pauly at 2/27/2011 04:44:00 PM