3am Rum and Fallout Fears 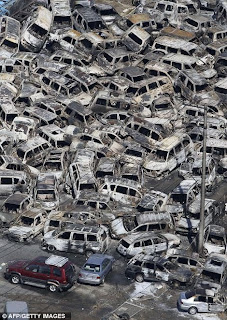 3am. It's 70 hours after my last post. I'm still drinking rum and fixated on Japan. This time, it's not an earthquake or tsunami, but the nuclear meltdown that is either being overhyped or under-reported. I hope it's hype and not my biggest fear -- that we're on the cusp of a nuclear winter.

Maybe this is nature's way of saying that nuclear energy is bad, so they are going to destroy the energy source, thereby radiating the populous and wiping out all humans. That's straight out of The Day the Earth Stood Still.

I wish I had a little more enthusiasm to write, but I'm caught up in the "it's the end of the world as we know it, and I feel fine" mode, which means I'm partying my ass off under the guise that it's going to get really hairy soon, so I must enjoy myself now before it's too late.

The tomorrow seems every more bleak and the yesterday seems like years and decades and lifetimes ago.

I don't know what is going to happen in Japan, and if there is an ensuing fallout, how much exposure will North America get? Will any of the nuclear clouds pass by us? Will it get swept up in a different weather pattern and expose a different country instead of us? Is it bleak of me to consider an option to move to South America to avoid any fallout?

It wasn't the earthquake, or the tsunami, rather it's gonna be the fallout. Sure, the earthquake triggered the events that led up to the shutdown of generators that cooled these nuclear reactors that went off line, but when they couldn't cool the reactors -- a meltdown occurred. It's supposed to be somewhere in between Chernobyl and Three Mile Island -- which is to say -- we're kinda fucked.

Just when it looked like Americans were waking up from their deep slumber after falling asleep at the wheel and letting the jackals in Washington sell the souls of the American people for pennies on the dollar to Armani-wearing suits on Wall Streets. The Wisconsin protests were the first glimmer of hope that I had seen in a very long time, but will the nuclear clouds reach Madison before the concentration of protests dissipates, and everyone goes scrambling for cover and radiation suits?

Ah, my head hurts thinking and overthinking about these dystopian scenarios. But then again, what if my imaginable fears have become a reality and Japan is just the seventh of one hundred steps towards the end of the world?