She was teasing me while I mixed up a mid-afternoon cocktail. I had been up since 5am and been working since 6am so I could take a few hours off to watch the Yankees game, but ended up working through the second half of that. In my estimation, I had put in a full day of work and I was finally relaxing with a well-deserved cocktail. 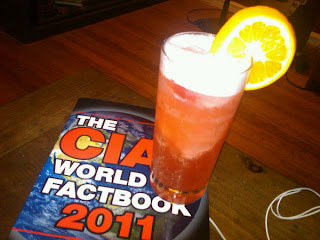 The previous night was a bit of a blur. I had not drank rum in a week upon my return to NYC. I had two or three beers total during my time home, nothing to sneeze at considering I have been pounding rum in LA. Upon my return to the slums of Beverly Hills, I re-acquainted myself with the rum bottles. I mixed Nicky a cocktail while she watched American Idol and I was in the middle of blazing through 150 un-read and un-answered emails.

The drunker I got, the more angry I got at what I saw on the television. Nicky watched Elton John week on Idol and some of the performances angered me so much that I hurled extra pita bread (leftover from take out at Gaby's) at the TV screen. I really wanted to put my foot through the TV but that would have been counterproductive considering that I'd have to pay for a brand new TV and all. I really don't care much about TV, aside from sports (which I end up sweating more than half of the games online using my laptop anyway) and when we had a brief discussion about a new TV a few months ago, I balked because I really didn't know if we were going to move and I'd rather buy a new TV for a new location rather than buy one and then worry about shipping it later.

The more I think about it, I'm convinced that Nicky watched American Idol in an attempt to tilt me so much that I'd go berserk and smash the TV in with one of my golf clubs. As a result, I'd feel guilty and buy a TV, but not just any TV, I'd splurge a bit and get something gaudy and 25% bigger than anything I really need. Ah, and in the end Nicky would get a brand new TV without having to pay it. Clever ploy. But I'm not falling for it.

If we end up getting a new TV, it's because some knucklehead missed a clutch free throw and I get so pissed off by losing a bet that I flipped over my coffee table or kicked in the TV myself.

At least, that's probably the most likely scenario. Even the most moronic reality TV shows won't send me over the edge like losing a sports bet.

Plus, not too many things will get me to set my alarm and wake up at 4am to watch a the last 6 hours of an 8-hour long cricket match, but that's what I did on Wednesday. By 7am, I decided it was time to start drinking rum and I penned a little bit about my brief encounter with cricket as a youngster and later on in life as an intrepid poker reporter abroad in Australia and Europe.

The World Cup final match for cricket is on Saturday starting at 2am. I could stay up all night and watch the match, or I can try to crash early on Friday and get up early to watch it. Who am I kidding? I have chronic insomnia. I'll be up anyway. But the real question is this -- will I be so shitfaced on rum at 10am on Saturday that I'll kick in my TV if India loses the world cup? If that's the case, not only do I lose the amount of the bet, it'll also cost me a brand new TV.