Sitting on the Dock on My Couch, Vol. 2

Over the weekend, I put the editing of JTSMD aside and delved into a world of books and films, but mostly documentary films. That's what I've been doing during the "quiet before the storm" otherwise known as March Madness.

A couple of weeks ago, I published the first installment of Sitting on the Dock of My Couch, which went into detail about some of the things I did when my girlfriend went away on a business trip -- and one of those was not sitting in my underwear all day, but rather I sat around on the couch, pulled tubes, and watched documentary films.

Of course, I watched a couple of regular films -- but both were more indie than mainstream. I re-watched and introduced Nicky to Highball, Noah Baumbach's first film that he wrote and directed, but used nom de plumes for both. Would love to know the reasoning behind that. Anyway -- it's a quirky film shot in Brooklyn at the same time I was living there in 1996. A young couple decides to throw a trio of parties with the intent to bring their friends together and have intellectual conversations about philosophy and politics. Hilarity (and banality) ensues.

And then there's The Runaways, based on Cherie Currie's autobiography. In the mid-1970s, she was the lead singer of an all-female group from L.A. called The Runaways. Also in the band? An angry, sexually-waffling Joan Jett, and Lita Ford. Kristen Stewart played Jett and Dakota Fanning played Cherie. Parts of the flick made me a little uncomfortable watching a 15-16 year old Dakota traipsing around in lingerie.

Anyway, here's what I watched on the documentary front... 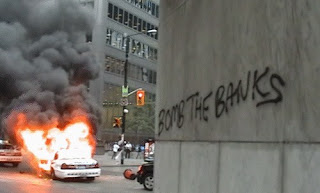 Toronto G20 Exposed - Protesters and police clashed during the G20 Summit in Toronto last summer. The massive security apparatus (set in place to protect the world's economic leaders) supposed cost over $1 billion, yet the entire summit was marred by news reports of police beating/detaining protesters after blocking them in where they had no place to go. The film uses actual footage from news broadcasts and homemade videos taken by participants and then posted on YouTube. Watch it here via TopDocumentaryFilms.com.

The Life and Times of Hank Greenberg - A sports doc about the Hall of Fame slugger Hank Greenberg. Although he played for the Detroit Tigers, Greenberg grew up in the Bronx. He was one of the most famous Jewish athletes of all time and played in the 1930s and 40s at a time when antisemitism was rampant. Greenberg had a shot at breaking Babe Ruth's single season homer run record -- and the myth was debunked whether or not there was a conspiracy in the league to pitch around him so Ruth's record would stay in tact. Greenberg admitted that he failed to catch the Bambino because he ran out of gas. Sorry, no link because I streamed the doc on Netflix.

Mind Control: America's Secret War - Short doc about the CIA conducting mind control experiments during the Cold War on unwilling subjects using LSD. That's right... liquid sunshine! They originally conducted tests on federal prisoners in Kentucky and college students -- but both test groups knew they were taking a hallucinogenic drug. That's when the CIA decided they needed to test LSD on subjects who had no clue they got dosed. Watch it here via TopDocumentaryFilms.com.

Blind Spot - I had high hopes for this film about Peak Oil, but it fell short of the mark for me. That's not to say it wasn't a good film (by the director who shot a few Hootie & the Blowfish videos in the 1990s). It's just that I've seen so many docs about Peak Oil, that I felt this one was a bit redundant. Ah, I'm biased, of course, probably because I've seen too many docs on this haunting subject. Watch it here via Tao of Fear.

Don't Talk About the Weather - I can't talk about this doc about chemtrails because I'm afraid that the government will try to silence me. But look up at the sky on any random day and you gotta wonder --what the fuck are they spraying? Does anyone know? Watch it here via TopDocumentaryFilms.com.

Howard Zinn: You Can't Be Neutral on a Moving Train - It's a bio doc about Howard Zinn, the author of the controversial A People's History of the United States, which is a history book written from the perspective of the "losing side" of wars and conflicts. Sorry, no link because I streamed the doc on Netflix.

2210: The Collapse? - More dystopia. This one had an interesting slant -- from the view of archeologists in the 23rd century trying to figure out how our Great Society vanished, just like contemporary archeologists are trying to piece together what happened to the Mayans. In 2210, a group of archeologists sift through barren desert lands trying to piece together what led to the abandonment and destruction of American cities like Phoenix after the disaster struck due to Peak Oil, lack of water, and the energy crisis that crippled America in the late 21st century. Watch it here via TopDocumentaryFilms.com.

Have you seen any good docs recently? Let me know. I'm always looking for new flicks to watch during insomnia-riddled late nights.
by Pauly at 3/08/2011 04:20:00 AM