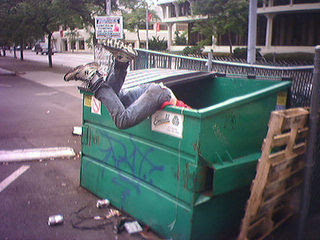 I read a book that could be misunderstood or mislabeled as dystopian literature, but The Modern Survival Manual: Surviving the Economic Collapse is not fiction.It's real. The author lived in Buenos Aires and he survived both the Argentina's financial collapse and the ensuing crime wave the enveloped his city. One of the things he wrote about that stuck in my mind were all of the hungry people who waited until nightfall and then scurried around the dark streets of Buenos Aires to dig through garbage left out on the sidewalk in hoes of finding scraps of food to eat.

How far away are we from that here?

More than a dozen (I've photographed and nicknamed no less than ten regulars/semi-regulars for my own security records) people a day come through the alley looking for bottles and cans in the blue recycling bins. And sadly, their numbers are increasing. The alley people often peek into the dumpster to see if any of the lazy hipsters tossed out valuable recyclables with their trash. Hippies recycled, hipsters with a conscience also recycled, but lazy hipsters who didn't give a fuck tossed out their cans of PBR with half-full cartons of take-out food from the local Thai joint.

On Sunday evening, I looked into my own dumpster and noticed a couple of obvious signs of dumpster dining. The alley people often cut open the bottom of garbage bags (like the one in my hand that I was about to toss out) in search of cans/bottles and sometimes food. The one I saw had the bottom spliced open -- a carton of Thai food was apparently consumed along with stripping the last remnants of a melon. That's when I thought about the hungry people living in the slums of Buenos Aires -- who went into neighborhoods with restaurants and big apartment buildings in search of leftovers.

I must have scanned my dumpster for less than eight seconds, but in that time I could have told you five things about whichever neighbor tossed out that specific bag of trash...

1. They are neat freaks that meet the daily recommended dose of Vitamin C. Evidence: they took the time to neatly crush and fold two cartons of orange juice.

2. They like spicy foods. Evidence: the leftover containers from a take-out Thai place down the street

3. They have a bank account or credit card with Wells Fargo. Evidence: they tossed out a statement and the obvious Wells Fargo logo was staring back at me.

4. They must have ordered something from J. Crew in the past. Evidence: they tossed out the spring/summer catalog.

5. They're careless about their mail and probably has lax security settings on their Facebook account. Evidence: they didn't rip off the address label on the mail order catalog, nor did they bother to shred important bank papers.

I could have dug deeper and looked at name on the catalog or on the banking statement, but I wasn't that interested. Just knowing how easy it was to spy on my neighbors was enough to spook me out for the day.

Luckily, Nicky has a shredder next to her desk, which I should use more often -- just to be sure. I actually shred all of my own stuff by my own hands. Call me a luddite, but it's just a habit that I got into. Even while typing this I have visons of my mentor on Wall Street ripping up pieces of paper and tossing them into the grey industrial trash bin right next to our desks. Even though those massive bins were wheeled into a separate room and shredded by the office workers after hours, he didn't want to take any chances on something getting missed, so he ripped his stuff into as many small pieces as possible. His excess/waste papers went through two rounds of shredding. As a result of his thorough shredding process, I learned one of my earliest lessons on Wall Street -- making sure to erase a paper trail by not being a fucking moron.

Then again, maybe the government is spying on me? And their agents are under deep cover, who dressed up like plight-riddled alley people in order to get access to my garbage without it being too obvious.