The Conundrum: Wheelbarrow of Weimar Marks or More Rum? 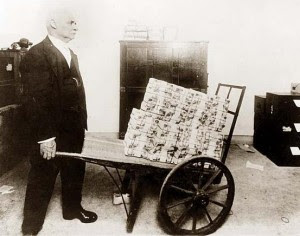 If the U.S. dollar collapses (we're almost there), then what's the point of waking up early every day, keeping an eye on investments, writing my ass off for clients trying to reduce my rates, and saving up to protect whatever assets I have left? Because it's all going to get flushed down the toilet anyway, right?

And save my money? Not in America. I can't get a savings account that will offer me more than 1% in interest. What a fucking joke....so much for rewarding hard-working Americans for not swimming in debt. If I want to my money to grow, I have to put it in play in the casinos and Ponzi Schemes of Wall Street.

So if that's my conundrum -- why am I not blowing all of my money and partying it up? And I'm not talking a party "like it's 1999", but like more a full-blown rager like the "end of the world" party?

This is a dangerous internal dialogue. I'm not one to wallow in self-pity or get caught navel gazing for more than a day or so, which is why I want to snap out of this funk and shift gears... to the high-gear of my soul. If all indications are suggesting an imminent collapse, then why am I not going out with a bang?

This new reasoning is not an excuse to justify why I've been drinking rum since 1pm.... 12:40pm to be precise. That's when I "officially" gave up on today. I woke up thinking I could change the world, but I didn't even get past noon before the reality of the situation sunk in.

Maybe it's time I just give up the fight and stay perpetually drunk, stoned, and schwasted... until my money runs out. At least then I can say I enjoyed every single buck before the USD officially collapses, and that way I won't have to wheel around a wheelbarrow of utterly worthless Benjamins.

The Grateful Dead lyric sums up my situation the best: "I'm going to hell in a bucket, but at least I'm enjoying the ride."

Except, I'm not enjoying the ride! So I better do something about it. While I think about a new plan of action, it's time for another cocktail as financial Armageddon approaches.
by Pauly at 4/28/2011 08:08:00 PM