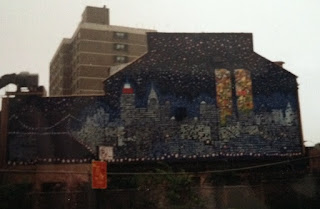 I lived in NYC ten years ago today and the events of that tragic day are crystal clear. Yet, I'm paralyzed with anger whenever I try to write about the specifics of the day the towers collapsed, and more importantly, the fallout that ensued. Angry. That's what happens when I try to turn on the faucet and write about 9/11. Like "HULK SMASH" angry. I even turn shades of green and get so worked up that it takes me a few days to get off mega-tilt.

A week or so before every anniversary since 9/11/01, I've sat down at my laptop and pecked away at the keyboard and just let everything... every thought, every rant flow out of my brain and onto the pages. My friends that know me well know that I don't believe in writer's block and if you've seen the plethora of scribblings I've regurgitated on the interwebs, you also know I'm not shy about sharing my thoughts about anything... from aliens to poker gods, from aspiring Hollyweird starlets to embeddeding myself with hippies on Phish tour, not to mention strange short stories that I've whipped up on a whim. But when it comes to the events of 9/11, I always hit a snag early on in the writing session and I get so infuriated that I often want to throw my laptop across the room.

Sometimes I think that if I don't write about 9/11, then the terrorists win. Sometimes I wonder if I actually write about 9/11, then the powers to be will think I'm a terrorist. It's really a no-win situation...kinda like 9/11 when you think about it. Those who have been deeply affected by 9/11 will never forget what happened, and there's definitely a lot of bat-shit crazy fuckers out there who wants to see America burned to the ground. But somewhere in the middle lies the rest of us. I just wish we had more people in power who could assess the situation with more logic and less emotion. Maybe then we wouldn't be bogged down in three wars (with a fourth on its way) which is draining the coffers and weakening the U.S. Dollar, while generating billions in Petro-Dollar profits to those manning the pumps. Alas, the fallout from 9/11 is making the U.S government broker than the worst degenerate gamblers I know in Vegas.

It's going to take me a fistful of pharmies and a bottle of rum to fully write about 9/11. I'm going to have to pick a random day of the year and just go for it. But at this juncture, I often wonder -- what's the point? 9/11 is what it is and conjuring up images and emotions from that fateful day only serves fear mongers, politicians waving the bloody flag (to get in office or stay in office), and corporations raking in billions in profits on those who have been able to manipulate the events of ten years ago today. I don't want to be a part of that junta, nor do I want to bring up bad memories for those whom actually lost someone special that day. But it's also not me to ignore the reality of a situation, which is why I'm bombarded with anger and frustration whenever I try to write about 9/11.

Then again, shouldn't I be mourning the death of America? Because that's what happened ten years ago today. The America of my youth is no longer in existence. America 2.0 is a twisted melange of Facebook sheeple, Snookis, Kardashians, X-Ray machines at airports, and bat-shit crazy politicians. These days, whenever I travel in Europe I find myself faking a Canadian accent so I evade any potential (un-winable) discussions on why America sucks, or whenever I'm in South America on business, I'm accused of being a CIA agent, and doing my best not to get kidnapped and tortured.

I haven't even touched the surface yet on 9/11 and I'm already in a bad mood. I told myself I wouldn't fall into the emotional trap of 9/11. I grew up in NYC and used to work in the World Trade Center on the 8th floor. I lived in NYC ten years ago and knew a broker who jumped from one of the top floors. The last thing he ever did was call home and leave a message to his wife and kids. His final words were: "I love you."

I can't write anymore about 9/11. I've already restrained myself from punching a hole in one of Halli's walls in her nice San Francisco apartment, and I fear I'll just end up breaking a few bones in my non-wanking hand. After all, it's typically American of me not to have health insurance, so even if I vented my anger and frustration over the last ten years, I couldn't even get an ER doctor to patch me up and send me home with a Vicodin prescription.

While I'm paralyzed with 9/11 anger, I'll point out that the U.S. Dollar has been tanking to its all-time lows and that U.S. Treasuries are now worth about the same as toilet paper. Silver was only $4.20 an ounce ten years ago and now it's over $40, meanwhile gold was trading at $271 a decade ago and it's now $1,860. Precious metals do not lie.

I'm going to let all this anger and frustration subside and I'm going to watch a lot of football today, because if we don't watch football, then the terrorists win, right? On 9/12/11, I shall get back to writing about more trivial things like poker and UFOs. It's safer for me to do so emotionally, besides the masses really just want to be entertained with mindless humor, and not reminded that the last decade of their lives have been hijacked in one of the most covert coups we have ever seen in recent history.

In the meantime, if you really want to read a few things about 9/11 written by much braver and better writers than myself, then I encourage you to check out...

To the Victims of 9/11... I'm Sorry by Otis
Five Years After 9/11 by Mean Gene
Fear and Loathing in America by Hunter Thompson