5 Things... In My Refrigerator

Yeah, so here's five random things, three of which are rather strange, that is currently in my refrigerator. Can you guess which one is mine? 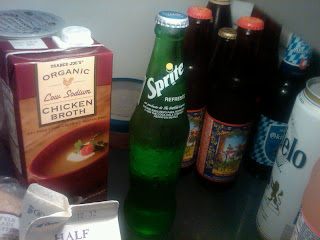 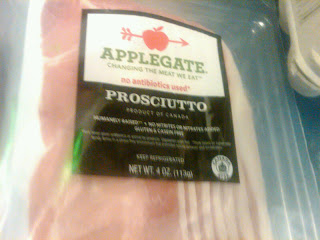 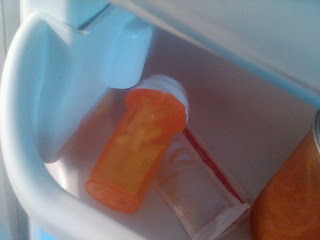 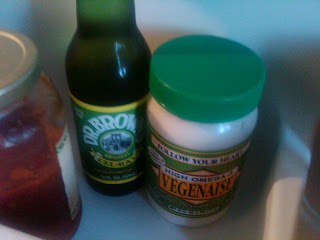 So have you figured out which one is mine?

1. Mexican Sprite: At first glance it looks like an ordinary Sprite, but upon closer inspection it's a Sprite bottled in Mexico. That means real sugar. I rarely drink soda, but I like the way Sprite tastes out of bottles. I guess this was a quirky impulse buy that I acquired from living in SoCal -- every once in a while, I'd grab a Mexican Sprite whenever I happened to see one sold at a random gas station or 7/11. Yes, this is the only item pictured that is mine.

3. Random Pill Bottle: This is a wet dream for many of you junkies reading this post. An unknown bottle with a dozen white pills. It could be anything. Uppers. Downers. Sideways. Happy Pill. Sleeping Pill. Allergy pill. Painkiller. The possibilities were endless. As much as you think it's mine --- it's not. It's been in the fridge since Nicky and I moved in. And no, I haven't sampled the pill... yet. I don't think Halli knows who it belongs to or where it came from either. Behold... the mystery pills. We should have a mystery pill themed party on Halloween.

4 and 5. Celery Soda and Vegan Mayonnaise: Two for one deal with the last photo. Both items were next to each other on the door shelf.

I'm assuming the vegan mayo is Halli's. I would never touch the atrocity. What's the point of making mayo if it's vegan style? Mayo is supposed to bad for you. Why try to make it out of healthy things?

The Celery soda is totally random and something I never knew existed before last Monday. It's not mine, nor Nicky's, not Halli. Skye picked it up from a local liquor store, thinking it was a bottle of ginger ale -- which looked very similar in color. Once the mistake was realized, it was too late and we inherited the mistaken celery soda. Oh, and I wouldn't drink any of it for less than $300. It's friggin' disgusting.

Email ThisBlogThis!Share to TwitterShare to FacebookShare to Pinterest
Tags 5 Things