Karl Denson's Tiny Universe arrived in San Francisco for a two night run at the Independent. The Independent is one of three popular venues that is less than a 15-minute walk from my apartment in Lower Pacific Heights (the Boom Boom Room and the Fillmore are the other two). So, Nicky and I were eager to see a show so close by without having to worry about buzzed driving and finding a parking space. One of the primary reasons we moved to San Francisco was to soak up the juicy music scene -- especially shows within walking distance from our couch. Last weekend we caught Denver's own Juno What at the Boom Boom Room, and this weekend we were pumped to catch a special performance from Karl Denson.

Denson is doing a little something different and very ambitious this tour by covering the entire Sticky Fingers album by the Rolling Stones. His first set is devote to all ten songs, while the second set is regular Karl Denson tunes. During this stretch he has Anders Osbourne sitting in on vocals and lead guitar. The Scandi wook's own rock band opened up for KDTU this tour.

Both shows in San Francisco were sold out. The Independent was super packed with a smattering of hipsters and the usual assortment of neo-hippie types. I had an extra ticket and sold it to a kid a few bucks below face. He showed up at 6:30 hoping to buy one at the box office, but got shut out. He tried to find one for almost four hours on the street in front of the venue -- and came up empty -- until I hooked him up.

Karl doubled on vocals and sax. He opened up the Sticky Fingers' set proclaiming, "This song is about interracial sex!" Then the band launched into an ass-shaking Brown Sugar.

The soused crowd sang along the loudest during Wild Horses. The highlight of the set (and from the "A" side was a smoking Can You Hear Me Knocking. I've heard Trey and Phish tease the ending too many times to count. My only complaint was that I wish Karl and company jammed it out more.

Nicky thought Denson's rendition of Bitch was the highlight of the "B" side of the original album. The jamming apex occurred during a faded-version of Sister Morphine. The dissonant trumpet/sax jamming almost made it feel like I was schwasted on pharmies. Anders jammed out so hard during Morphine that he had to change his shirt after the song.

Crowd definitely perked up for Flowers, and a sultry Moonlight Mile closed the Sticky Fingers set. 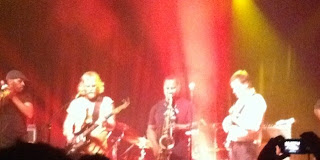 Karl Denson is playing again on Saturday, but that show is also sold out. He's heading down to Chico on Sunday then off to Colorado to play gigs in Boulder, Telluride, and Denver. This tour's big moment is the Halloween gig in Denver when KDTU is playing a special themed show -- Halloween 1971. Denson is going way back forty years to perform Sticky Fingers, while local power trio Rose Hill Drive will tackle The Who's "Who's Next." Anders Osbourne is also opening up and will be sitting in with Karl for the Sticky Fingers set.

If you get a chance, check out the Karl's Sticky Fingers project.

* * *
This version of Bitch was not from the SF show, but from last week's gig at the HoB in Hollywood. As soon as find any vids from the Independent, I'll post it here...