I volunteered to work today, woke up at the crack of the ass, and tried to get breakfast at my local coffeeshop. It was closed. D'oh!!! I forgot it was Turkey Day. Rough. Very rough way to start the morning... but in the bigger picture, it really doesn't matter, because I'll be done with a deadline and assignment by mid-day and then I can join my lovely girlfriend and her cool family in West L.A. for some serious grub with football on in the background. By the way, here's a Turkey Day NFL betting preview that I wrote for MatchBook.

Last summer, I barely survived a car crash in Vegas and spent the rest of the year trying to rehab and heal, both physically and mentally. Last Thanksgiving, I flew from San Francisco to L.A. in order to have dinner with Nicky and her family. It was an emotional Turkey Day because I was extremely grateful to simply be alive. Nicky drove from San Francisco to LA. I flew. I was too afraid to be in a car. In fact, it's been 500 days since I drove a car and was behind the wheel. I'm still scared.

It's been an up and down 2012... but mostly on the upside so I can't complain at all. In fact I'm so damn lucky. The "down" parts involved having to move out of San Francisco (damn greedy landlords!) and relocating back to the Slums of Beverly Hills. Then there's the monkey on my back... and a constant day-to-day battle with an addiction to painkillers. Sometimes I'm miserable and self-medicate but most of the time the pain is excruciatingly legitimate. I'll probably need a hip replacement in a decade and my back is twisted and tangled like a bush league quarterback.

Life is day to day, but such is life.

The "up" parts of this year included one of the best summers I had in a very long time because I visited my brother and family in NYC, caught a ton of Phish shows (particularly with GMoney, Iggy & Mr. Fabulous in the Midwest). But most importantly, I found a little semblance of happiness by  alleviating the constant pressure of everyday poker writing and after eight years of the nonstop and relentless grind, I took a must-needed hiatus from Tao of Poker, which was also an integral part of an overall decision to skip the World Series of Poker. I didn't want to move to Las Vegas for two months again... in the middle of the summer.... because Vegas always turns me into a miserable fuck and Vegas was also ground zero for the car accident and although I had healed physically, I was not strong enough mentally to return to the WSOP grind. Covering the WSOP is like climbing a mountain and I didn't have the mental toughness to survive and I didn't see a point to doing it an eighth time... so I skipped it... but I drew a lot of guff for my decision.

Last year at this time, I was happy to simply be alive. Small simple pleasures... like breathing and walking without absorbing pain with every single step. This year on the morning of Turkey Day, I'm happy to still have a career... and have a job. I'm damn lucky to get paid to write because times are tough all around and this is not a good time to be a writer or creative person in America. It's no coincidence that three out of four of my biggest clients are non-U.S. based and located in Europe (London, Isle of Man, and Paris). Yeah, thank god for the French and the Brits. They have always been sincere supporters of the arts and I'll be eternally grateful to them and everyone else that still gives me a chance. 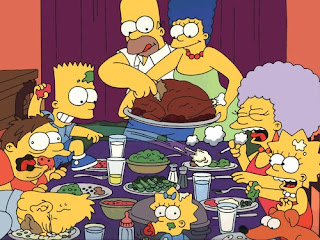