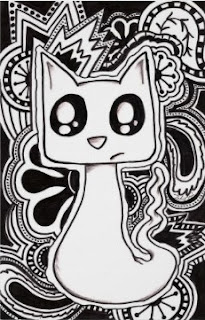 I'm a cat. That's my primal correlation and my animal personality.

How did I come to that conclusion? When I lived in San Francisco, one evening while hanging out with Nicky and Halli, I stumbled upon a "moment of clarity" and figured out that all three of us were cats... and we were able to live together nicely because we all just wanted to be left alone and didn't need constant attention. Serious emphasis on the wanted to be left alone part, which is what happened most of the time. We all hung out in different parts of the elongated apartment for long stretches of time without being made to feel weird to force a social interaction. When it was time to hang out... we hung out and had fun, lots of fun, which I think was directly related to how much space and room we gave each other. Sometimes living situations can be smothering or suffocating, which is why you need to make sure you live with people who have cat-like personalities.

We determined that human personalities fall into two categories: a cat or a dog. You needed constant attention (ergo... dog), or you wanted to be left alone (ergo... cat).

Pick one. Cat or dog.

Everyone has that one friend/family member who cannot be alone. It's frustrating because you often get sucked into becoming an unwilling "dependent" in a co-dependent relationship whether you want to or not. That's troubling because it's incredibly selfish for the attention whore and utterly suffocating for the victim (friend, family, spouse, etc.). Dog-core people are often those co-dependent types and cannot do anything serious without assistance... food, shelter, urination/defecation, socializing, exercise, etc.

For most of my life I identified with the inner-dog... for the sole reason I enjoyed pissing outdoors. It's a passion of mine. I have a weird compulsion to urinate in wide open fields. When I lived in NYC, I used to get drunk and go on long walks to try to sober up, but end up always having to piss (especially after "breaking the seal"), so I had devised a perfect way to alleviate my bladder issues by pretending to make a call at a payphone (pre-cell phone boom when every other corner had a bank of payphones) and pick up the receiver with one hand, yet I'd be unzipping my pants and draining the lizard with my other hand. Presto. Fake phone call... instant urinal.

The streets were my toilet. The world was my toilet.

I only got busted once. It was on 95th Street. A young black woman wandered by and said, "I guess you had to go really bad?"

Yes. And no. Yes I had to pee. But I could have wandered into a bar and used their toilet. But I enjoyed urinating outdoors. During college, I loved stepping outside to the back porch and pissing off that area. I wizzed on a couple of fraternity brothers on more than one occasion.

Which brings me to this particular (and unusual) topic which I turned into blog fodder... I might enjoy public urination, but I had misidentified my inner-animal. I'm not a dog, but instead a cat that wants to be left alone.

Seriously. That's how I usually am. Bugger off. Leave me be. I don't want anyone to bother me until I'm ready to be bothered. Which explains why I get super pissed if I'm sitting in a cafe trying to read a book, or sitting in the farthest corner of an airport at an empty gate and almost always I attract some douchebag who wants to have a lengthy conversation on his phone. There's plenty of other places... why invade my quiet space?

The fun parts of Twitter is the one-sided nature of it. It's like an open mic night... I can walk up... tell my story, sing my song, tell a joke, get on a soap box, or shill the fuck out of something. Most of the time, I'm shilling for myself. I like having conversations in real life and not through social media filters, so I use real life means of engaging in those conversations by talking to someone directly and not on Twitter or Facebook. Some folks have no problems having multiple public conversations at once, but I'm not that kind of person. Twitter limits what you can say and what kind of things you can convey. That's the opposite way of communicating. Anything that hinders communication is kinda bad... which is why I sometimes have mixed feelings about the 140 character limit (even smaller if you address someone with a super-long twitter handle).

I understand why Twitter was birthed and how the original vision of its creators didn't quite turn out as expected. Twitter is useful in a brief spurts to convey small bits of information in one-way, two-way, or multi-way means of communicating. But the mob of users took over and turned it in to what its become.... an endless stream of static. The beauty of Twitter and other tentacles of social media is that you can use it anyway you want -- just like life -- it's yours to use anyway you see fit. It's just sad to see people abuse it and become bullies, or trolls, or cannot figure out that there's a lot of information that is best withheld for public consumption.

Some folks are like dogs on Twitter. They need constant attention (if someone has an ungodly amount of tweets that start with an @reply to someone else... they're a dog and crave attention). You have to take them outside for a walk or they'll piss all over the place. Other Twitter users are like cats... or herding cats...  it takes a lot to impress them but most of the time, they just want to be left alone, hang out in the shadows, and lurk around in the darkness.

I haven't figured out how to urinate in public with Twitter. I can tweet about it... "Walking up to make fake phone call; pissing all over ground"... maybe even send a Twitpic of myself in midstream (which I believe I did once and may or may not have accidentally revealed the tip of my penis). Maybe I can just get a Justin.tv account or create a UStream account that caters to public urination. The piss cam would be a huge fucking deal for events like Mardi Gras and St. Patrick's Day.

How the hell did we end up where we ended up? I started talking about dogs and cats and personalities and I ended up ranting about the static on Twitter and how Eastern Eurotrash get their freak on by watching others urinate in odd places.
by Pauly at 1/26/2013 04:20:00 AM