Another blah grey rainy morning in Southern California. No sunshine. Just gloomy clouds that looked like a shade of grey that David Foster Wallace would refer to as "dirty dimes grey." I read my CrackBerry in bed and sifted through my email while my girlfriend was fast asleep.

I got a new assignment from my editor in London. He wanted me to write about the Lakers' chances of making the playoffs. Awesome topic. I jumped out of bed and headed into my office to start researching it. I fired up Miles Smiles and wrote an outline. During my research, I came across a hysterical piece channeling shades of Requiem for a Dream about a pill-popping Mike D'Antoni as a "noir antagonist" dealing with a crazy owner and head-strong players in their own universe.

That's when I got distracted by a tweet from Tony Peirce (a.k.a. @busblog, former editor of LAist.com and creator of one of my favorite blogs -- Busblog). He said something about why he loved to live in LA because of a dude on a roof who wouldn't get down. I clicked through the link and watched the live feed from a news helicopter circling East LA. While a rain gently fell, a shirtless guy stood on his chimney while the federales tried to talk him down. He refused to budge. 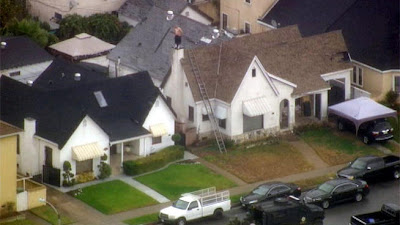 I woke up Nicky to watch the scene unfold. This standoff went on for an hour or so. Someone cleverly created a Twitter account1. I didn't do it, but you gotta love the ambitious ones who jumped at a chance to capitalize on the absurdity of breaking news situations.

For a brief moment, the news copter left the scene because they got wind of a car chase in Fullerton. The live feed left the roof and whizzed high over greater Los Angeles. Moments before the news copter reached the car chase vicinity, the producer announced the suspected bailed and a foot chase ensued. The producer ordered the news copter back to the rooftop scene. By the time the copter returned to East LA, the shirtless guy on the roof had come down. Crisis averted. I didn't get to see the outcome. Did he jump, or get tasered, or have K-9 dogs run up the ladder and bark him into submission? I think he simply climbed down the ladder.

I had the sincerest intentions to return to my office to research an article on the Lakers demise, when I got distracted by a tweet from F Train. He was on the other side of the country in NYC and mentioned news copters buzzing over his apartment in Brooklyn. Turns out a dolphin got stuck in the Gowanus Canal. All I kept thinking about was how disgusting that canal is and that the dolphin was totally miserable. 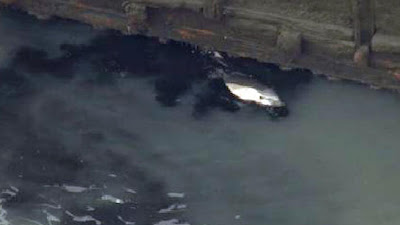 Within minutes, Shaniac created a Twitter account for the lost dolphin2. It reminded by when the Bronx Zoo cobra was on the loose and someone with a wry sense of humor spawned an account for the missing reptile.

There's no better reality TV than real life. During college, the infamous OJ and the Bronco chase occurred in the middle of an the NBA Finals game. NBC broke away from the basketball game and provided live aerial coverage of OJ's white Bronco chugging down the 405. I was so pissed that hoops got bumped by fucking OJ on the run. My buddy Jerry and I rushed outside and listened to the rest of the Knicks-Rockets game on his car radio.

One of the first times I visited LA as an aspiring writer in the late 90s, I had a meeting in North Hollywood the same day of the infamous bank heist shootout that was broadcast on live TV. All of this went down right down the street! I was trying to get hired as a writer's assistant, but I spent the entire interview time in an conference room watching the shootout. I didn't get the job, but I got a glimpse of what people did in LA when weird shit happened like a bank shootout or a high-speed chase.

Anway... all of this gawking at breaking news and live events, made me wonder how cruel some folks would be if Baby Jessica had fallen down the well today instead of years ago before social media and the internet. How many parody accounts and Tumblrs would that "baby stuck in the well" circus produce?

I lost interest in the dolphin. What can I say... it's difficult to capture my full attention. I went back into my office and started handicapping Friday night's NBA games (I like San Antonio at Dallas and will eventually post my plays over at Ocelot's tumblr). That's when Nicky screamed, "OMG! Another chase!"

Yes, another day... another police chase in SoCal. I walked into the living room and Nicky was sitting in front of the TV with channel 7 on. We watched a few minutes of the chase (in HD) as it continued through the streets of Orange County. 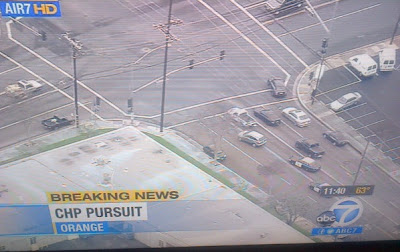 CHP3 tried to pull over the guy in the SUV and failed twice. The first time, the suspect slowed down and three patrol cars tried to surround him, but he made a slick maneuver and snuck away. Twitter exploded with "keystone cops" comments. A friend of mine is a former cop and he told me that your adrenaline gets super amped up during any sort of chase, so I could only imagine that those cops were jacked up with pure adrenaline and super pissed when the suspect's vehicle pulled away.

The squad cars chased him down one major street for a few minutes, but this time they cornered him and made the SUV pull over. A barking K-9 unit jumped out and approached the vehicle and two sheriffs with their guns drawn slowly made their way to the SUV.

I noticed the cops made another error -- spacing issues4 -- and failed to box in the suspect's vehicle. The lead car (at the bottom of the screencap) should have stopped at a 45 degree angle against the curb, so the only potential escape route would have been up on the sidewalk. Instead, the SUV had a clear path to getaway. 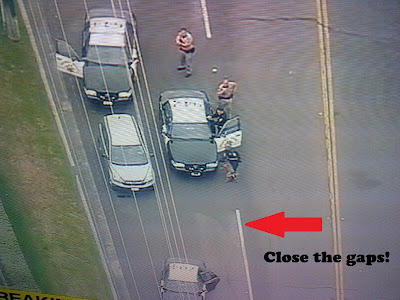 You know that expression about "giving someone an inch, and they take a mile"? Well, the suspect saw the hole and floored it. I'm surprised one of the cops didn't shoot.

Everyone jumped back in their squad cars and the chase continued. I made a sandwich and was prepared for a lengthy chase. If they suspect hit the freeways it could get ugly.

The cops were familiar with those side streets so they executed a perfect PIT maneuver and were able to immobilize the bad guy. The had a much tighter defensive ring and there was no way the suspect could escape. Of course, the driver refused to get out the vehicle, so one of the cops smashed the window, opened the door and dragged him out. 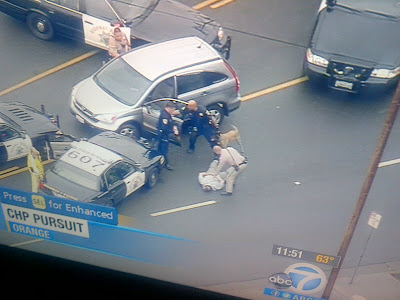 With the suspect in custody, it was time to turn off the TV. I spent at least four hours watching live events involving a would-be thief who got chased onto a roof by LAPD, then watched a wayward dolphin struggle in grimy canal in Brooklyn, and then watched a car chase through the OC.

Yeah, just a typical Friday morning. Now, finally I can get back to work.

2. @GowanusDolphin was quickly suspended and Shaniac explained how a bunch of people flipped out on him.

3. CHP a.k.a. California Highway Patrol or if you're a child of the 70s-80s and love Erik Estrada, it's the same law enforcement organization as the hit TV show CHIPS, but these guys were not on motorcycles.

4. I've been watching way too much basketball and football in the last few months, and know when any defense is beatable if they allows huge gaps in their coverage. In this instance, one of the squad cars should have plugged any holes.