I miss the old days when January 1 hosted a hearty slate of meaningful college football games. This BCS moneyprinting sham nonsense spread out all of the good games over the next week, instead of one mega-day celebrating college football. January 1st became a bastion of secondary bowl games. The once-heralded Rose Bowl included a Big Ten team that was only in Pasadena by default (Penn State and Ohio State were not eligible), so third place and subpar Wisconsin represented the Big Ten against Pac-12's bridesmaid Stanford.

Nicky woke me up early to watch the Northwestern game. That's where she went to college as a musical theatre geek and she's not a huge sports fan, but she knows enough about the major sports to humor me and watch a game with me. She's by no means a college football fan, but she'll actively root for Northwestern whenever they are on the boob tube.

The fact that the game was on at noon on New Year's Day was problematic because we were both out fairly late after seeing Phish at Madison Square Garden. We woke up in time to see the kickoff and that's when I realized that I missed the old-school New Year's Day tradition by watching major bowl games while shaking off a hangover. The goal was to be well enough by the evening to enjoy the primetime games. But in the wake of the BCS, the bowl games we got were... kinda bland. Northwestern-Mississippi State is the perfect example of mediocre teams vying for a win in a bowl game sponsored by something I never heard of (TaxSlayer?).

And don't get me started about no holiday classic outdoor hockey game.

It's hard for me to watch any random sporting event... unless I have money on it, it's a favorite team of mine, or I'm watching the game for scouting purposes because at a future date I want to bet on or fade one of the teams involved.

I put a small taste down on Northwestern +2, only because I got burned by Miss St. a few times this season. A significant amount of professional gamblers I know had bet Northwestern while most of the public were backing the (bottomfeeding) SEC team against the (historically unable to win) Big Ten team. I felt as though I was on the right side of the game. My handicapping system suggested Northwestern was a 2 or 3 point favorite and not the underdog, so it seemed like a no-brainer to take a shot at the game... especially if I was going to crawl out of bed to watch it.

Northwestern won... and collected their first victory in a bowl game since 1949 during the peacetime post-WWII years. Nicky was happy. I won a few bucks and it was a good start to a long day of college football mediocrity. 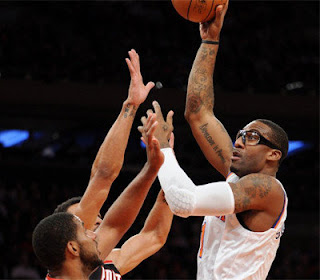 At least the Knicks would be playing later in the night to make up for the lack of quality games. The special night marked the return of Amare, who was sidelined with a bad knee for all of this season.

I watched the Knicks-Blazers game with my brother. It was weird because the game was played at MSG, where I had spent the last four evenings watching Phish perform. Heck, just 20 hours earlier, I was fried to the tits and standing just around midcourt on the floor of MSG thinking about how vast "the world's most famous arena" really is in real life versus how small it looks on TV.

The Knicks lost. They are now 0-1 with Amare. Melo dropped 45 in a losing effort, which is the kind of things that happen to Kobe Bryant and the hapless Lakers.

By the way, I wrote three recaps of the four Phish concerts I attended at MSG to end 2012. The fourth and final recap about New Year's Eve has yet to be written while it marinates inside my head. For now, here's the other recaps...


MSG 1: This Time Its Gonna Be Different
MSG 2: Mellow Mood
MSG 3: Won't You Come Out to Play

If I'm ambitious, I'll write a NYE recap before my flight to LA. If not, who knows... But at least I wrote here twice in the last two days.