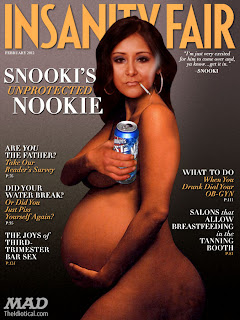 Snooki is in labor.

That was the teaser commercial. I almost threw my shoe at the TV.

There should be an UN Resolution that prohibits Snooki and other cast members from The Jersey Shore from reproducing. It's for the betterment of the gene pool. As long as they don't breed, the world will be safe from inbred orange meatheads infesting the world like a pestilence on this land.

Snooki birthing a baby on her own reality show is a prime example of how our culture devolved into a competition to see who can best cater to the lowest common denominator. It's just like that lyric from Phish1: "Brain dead and many of money. No future at all."

If Mozart and DiVinci and Michael Jordan are the pinnacle of human achievement and the best our species can offer up, then we've hit rock bottom with orange-spray-tanned Snooki and her poofy hair.  We're sheep being led to the slaughter because the viewing audience is so doped up on water-down, dumb-down reality TV, that they've lost any ambition to accept anything other than junk-food entertainment. This is exactly as Chris Hedges predicted would happen in Empire of Illusion: The End of Literacy and the Triumph of the Spectacle.

I'm waiting for the time when washed-up MMA fighters fight live animals in cage matches. We're three or four years away from that becoming the rage on U-Stream, or some other rogue streaming site from Brazil that becomes more popular than YouTube and Facebook combined because it airs live streams of snuff films, Beiber fans cutting themselves, and grown men fight grizzly bears to the death.

It's like the Romans throwing Christians to the lions for bloodsport and mindless entertainment. Except it's TV execs tempting roid-heads with fat paydays and all you-can-shoot thoroughbred-injections and tossing them into the Octogon with a wild animals du jour, while millions of attention-starved, faux-reality-show bloated, entertainment junkies are aroused at the sight of torn limbs and humans mauled by panthers.

Maybe they'll finally throw Snooki in a cage with a giant boa constrictor and we'll chant obnoxious pro-American slogans like "USA! USA! USA!" as the snake swallows her whole starting with the head first, so we won't have to hear her gargling yelps. I'd pay $49.99 to see that live shitshow. Americans all over the country would host a Snooki Death Cage party that would rival Super Bowl parties. It's not every day you get to see your favorite washed-up, Z-list celebrity and hopelessly trying-to-hard to stay relevant reality star killed off in such brutal fashion. 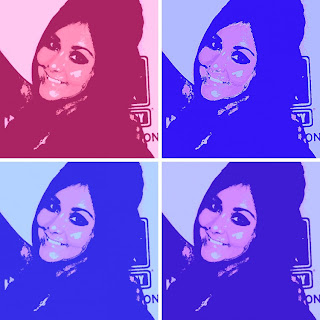 But hey, they washed-up stars might not always die... right? Some of them could live and then they'll become the toast of the town and hit the talk show circuit and get their own TV show and relive a few extended minutes after their original 15 minutes of fame was twisted, torn, and cast aside like a used fast food ketchup packet

Even in Snooki's Cage Match, there's a 4.6% chance Snooki successfully kills the big fucking snake before it strangles her to death and eats her whole. Regardless of the actual numbers, any reality star vs. exotic animal in a cage match creates an opportunity for gambling. Bookies from Curacao to London to Vegas would be booking action.