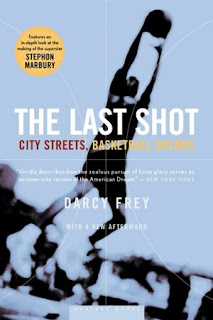 Seven Seconds or Less: My Season on the Bench with the Runnin' and Gunnin' Phoenix Suns by Jack McCallum

The Last Shot took place in the early 1990s. It told the story about four budding stars from Lincoln High School in Coney Island who desperately wanted to get out of the Brooklyn projects by earning scholarships to play basketball somewhere... anywhere. Seven Seconds or Less detailed the daily grind of the Phoenix Suns, who were trying to win the NBA championship during the 2005-06 season.

The only thing both books have in common is the subject of basketball. The writing style is vastly different. Darcy Frey is a journalist (Harpers and New York Times Magazine), while Jack McCallum is a seasoned sports writer (Sports Illustrated). Frey waxes poetically about the ebbs and flows of the gritty streets of New York City, while McCallum gives a behind-the-scenes look at professional basketball after he embedded himself with the coaching staff for an entire season.

Frey comes from the artsy fartsy world of the New York literati, but he's a magnificent story teller and was able to make stuffy Upper East Siders aware about the socioeconomic and race issues that plagued NYC after urban renewal failed. Frey eloquently captured the plight and struggle of four exceptionally talented teenagers who had the odds stacked against them at birth, yet each had a rare chance to make a better life for themselves (and their families) because of their uncanny ability to put a ball in a basket. Millions of dollars were at play and everyone wanted to get a piece of the pie. Frey peels back the complicated and seedy layers of the onion known as college recruitment as it affected three starters at Lincoln High School during their senior year -- Corey Johnson, Tchaka Shipp, and Russell Johnson1. Not to mention the heavy recruitment of freshman wunderkind named Stephon Marbury, who started getting attention when he was in the fifth grade.

Out of the two books, The Last Shot is the better one mainly because Frey is an excellent writer. He doesn't throw away any sentences even when describing the details of a pick-up game in the playground. Even for non-basketball fans, Frey keeps the readers engaged with this urban tragedy. You know that the odds are against these kids so that even if they can get out of Coney Island, they'll still be hampered by the pitfalls of fame and be torn apart by vultures who come out of the woodwork (hustlers, crooked businessmen, clergy, family members, gold diggers, gang bangers) to take advantage of young men who just came into a shit-ton of money. Heck, even Stephon Marbury's father shook down the author for a few bucks. The elder Marbury was looking to cash in on his son's success and refused to be interviewed by Frey unless he was paid cash.

The Last Shot took place in 1991 and it's been over two decades since Frey first followed around the players at Lincoln. We already know how all their stories turned out so I'm not revealing any spoilers. Only one of the four Lincoln stars, Stephon Marbury2, went onto the NBA and escaped the trappings of the ghetto, while one of the kids died at 26. The other two kids fell through the cracks and joined the ranks of former high school stars whom fell short of fulfilling their wildest dreams.

Although Marbury was more of a secondary character in the book, Frey spent most of his time with Corey, Tchaka and Russell. Marbury was the superstar, even as a freshman, and pretty much everyone in Coney Island knew he was going to make it big. But the other three kids? Never made it.

Out of the trio of Lincoln seniors, only Tchaka earned a Division I scholarship with a full ride to Seton Hall, while Corey and Russell washed up in junior college due to low SAT scores (both failed to make at least 700). At Seton Hall, Tchaka butted heads with volatile head coach P.J. Carlesimo and left after two languishing seasons in which he averaged only 3 points per game. He transferred to Cal-Irvine, but he got into a car accident before he could play a game. Lingering injuries prevented him from extended his dreams of playing in the NBA. Tchaka is currently a maintenance guy in Las Vegas.

Corey flunked out of junior college and never played ball again. Corey, the budding poet and writer, was more focused on the ladies and the bohemian lifestyle. He knocked up a girlfriend, moved back to Brooklyn and worked in his father's plumbing business while he tried to write his memoir on the side.

Russell (a.k.a. Darryl Flickering) signed with Temple, but poor SAT scores kept him out of a D-I school. He attended junior college in SoCal and tore up the JUCO circuit. He eventually earned a spot at D-II school (Cal-Riverside), but ran into some domestic problems and his career fizzled out. He became a minister and an advocate for the homeless. Sadly Russell died in 1999 when he was hit by an Amtrak train. Over ten years later, his former teammates wondered if it was an accident or he intended to commit suicide.

Like I said, The Last Shot is very sad and a powerful cautionary tale, more of a Shakespearean tragedy than a book about hoops.

Seven Seconds was more upbeat. It's a quick read and the perfect air plane book. "Seven Seconds" is based on a philosophy by NBA head coach Mike D'Antoni who believed a defense is most vulnerable in the first seven seconds of a possession (while in the middle of setting up), so they wanted to attack opponents by attempting a shot under seven seconds. That's the basic underlying principle, but there's a little more depth to D'Antoni's spread offense. If teams have the proper personnel, then they can score a redonkulous amount of points (especially if they are hitting their three-pointers). D'Antoni is currently the coach of the L.A. Lakers, and they are struggling because they lack the right guys to run his offense smoothly. However, in 2005-06, he had the right guys to make it happen... well sort of. That season his team was plagued with injuries (Amare had a bum knee even then), but they made the most of it with excellent an excellent season by Steve Nash, Shawn Marion, up-and-comer Boris Diaw, and shut-down defense by Raja Bell.

Jack McCallum hung out in coaches meetings, but he also spent significant amount of time with the troops during down times at practices or on the road. There's a few funny stories, but Seven Seconds seriously lacking inside dirt (this wasn't a tell all or dish on who was smoking weed with groupies or banging strippers). It's a straight forward narrative about the Suns season.

Here's what I grokked:

- Steve Nash played so hard every minute of every game that he was worn down and beat up when the playoffs came around.

- Amare is a weirdo, but you got the impression his peers and coaches respected his abilities and liked him as a person, but they thought he was soft for not playing hurt.

- Shawn Marion is talented, but he worries about too much petty shit. He always felt dissed in someway... by teammates, by coaches, by the media, by the fans, by the owner, by everyone. No one doubted his physical abilities, but he was a little bit of a whiner.

- Mike D'Antoni came off as a typical player's coach. He was a former player who never quite made it to the big time. He was a scrub in the NBA and dicked around the ABA and Euro leagues. But he had the respect of the locker room because he played the game.

- D'Antoni's dedicated coaching staff (assistants Alvin Gentry and Marc Iavaroni) of hoops junkies reminded me of the non-com officers from Band of Brothers. They didn't have the prestige of rank, but they were the guys in the trenches with the grunts and did all the dirty work behind the scenes.

I started reading Seven Seconds in an airport bookstore but never bought it or finished it. When D'Antoni became the Knicks coach, I wanted to read it but never got around to. I found it for super cheap (under $1) online and picked it up because both Nash and D'Antoni are on the Lakers and I wanted to see if I could learn anything in the book that might give me a minor edge as a sports bettor. Unfortunately, I didn't take away anything in that area. But, it was a quick read.


1. Russell Johnson was not his real name. Frey did not have permission to use Darryl Flickering's name in the book, so Frey changed it.

2. Stephon Marbury played one season at Georgia Tech before going to the pros. He was a 4th overall draft pick and had a good career in the NBA, despite being a ball hog. Marbury eventually played for his hometown Knicks and currently plays in China, where he's a mega-star.