1951. When Remo drank when he was not working and penniless and couldn't score dope. He drank. Heavily. He hung out at Sully's bar because that's where most of the musicians hung out and Remo could mooch free shots of rye from one or two of them. If he could get them to play pool, before/after gigs then the slickster could hustle them for free drinks. He kept a bottle of cough syrup in his pocket, which he got at a drug store in Chinatown. The old lady behind the counter mixed batches of it in the back room. It was like a witches brew, but Chinese style. Who knows what she put in it. Morphine? Coedine? Opium? It tasted like cherries and smelled like a pig's ass. A couple of sips made ignited a three-story alarm fire inside your stomach. Rye and Pearl's syrup were the only things that helped Remo function when he was dope sick. 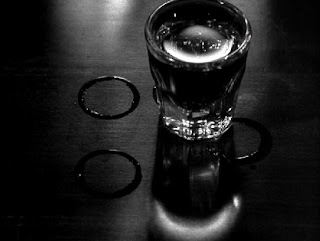 Surly Sully Sullivan, the shortempered war hero from the Battle of the Bulge was the proprietor of an unnamed watering hole on Ninth Avenue. Surly Sully felt Remo was a bum.

"The snake never has money. The minute that doper gets a gig, he blows his wages on dope. Never bothers to pay me back a nickel."

Remo owed Sully and owed half the regulars in the bar. Remo got shanked once because he ran up a hefty debt to a Puerto Rican smack dealer/pimp. The scar only drew more sympathy. Remo manipulated his friends with sad stories about his wife threatening to leave him, or how he was fired from Cotty's band unfairly. He really should have been a used car salesman instead of a junkie trumpet player, because he had a knack for getting people, even strangers, to give him their last dollar.

Whenever Remo got kicked out of a band, it was never his fault, when in fact he always did something to warrant a dismissal. He bent the truth about his unsympathetic band leaders and mislead people about his health (bleeding ulcers) only to make everyone feel sorry for him. The sadder the story or the greater the injustice, the more people bought him drinks. Remo had some chops but he never practiced. All he cared about was toking refer, eating donuts, scoring dope in Harlem, and beaver hunting. He showed up late to gigs. He showed up his bandmates on stage. He stole solos. He stole girlfriends. He stole cigarettes. If you fell asleep on a train while traveling with Remo, he'd pick your pockets and steal whatever he could get his grimy mitts on.

During WWII, a teenaged Remo did everything possible to flunk the psych exam but the Army recruiter knew he was purposely trying to seem insane, so Remo was declared psychological fit for service and he got shipped off to bootcamp. Remo didn't last three weeks before he stopped drilling and stayed in his bunk. He claimed he was a conscientious objector and due to religious and moral reasons, he couldn't kill another human being.

The shrink in charge of Remo's evaluation was convinced that Remo made up a nervous tick, but he booted him from the Army after he lunged at the shink's genitals on three separate occasions. The shrink was shocked the first time and was taken aback at the sheer ruthlessness of Remo's desire to get out of bootcamp. The Shrink tried to continue the exam, but Remo went for his family jewels a second time and the shrink connected an uppercut to Remo's jaw. He recoiled and slumped back in the chair. A few minutes later, Remo went for the shrink's crotch a third and final time. The shrink decked Remo and knocked him out cold. Remo was discharged the next day. He got his 4-F.

Sully was a surly ginger from Hoboken. He was an angry guy before the war, and everything he experienced overseas just made him meaner. Sully barely survived, but he gutted it out. That's what real men do. The Nazis tried to break his spirit, but he never relented. The Nazis crushed his arm (shell exploded in a tree and a branch nearly severed his entire arm) in the forests of Bastogne, and he almost bled to death, but he wasn't about to give them the satisfaction of dying on their home turf (even though he was entrenched in Belgium)  while surrounded by Panzer divisions during Hitler's counterattack in late 1944. Sully can give you the name and rank and nickname of every single member from his unit who died in Bastogne. All forty-two guys. Sully rose to the rank of Captain by the time he left the Army in late 1945, which is why most of the regulars called him "Major." Sully didn't mind the mix-up. A major was ranked higher than a Captain. Almost six years after the war ended, Sully was still bitter.

Sully felt bad for the guys who were listed as 4-F. His brother was blind in one eye, and although he  worked at a munitions plant in South Jersey, he felt guilty the entire time that he was the only kid from their hometown who wasn't fighting the Japs or Nazis. It was a bravado thing. The 4-F label meant you weren't a true man and unable to fight the enemy, especially if you wanted out for moral reasons.

Sully loathed conscientious objectors. The Brits called those guys "Conchy." Sully called them "chicken shit." No one was more chicken shit than Remo.

Sully hated the fact that Remo took advantage of the system in order to get out of combat duty. He felt Remo was unpatriotic louse, an unapologetic rat, and a lazy coward. Sully might have let it go if Remo had not bragged about skipping out on the war which gave him plenty of time sleeping with women whose husbands were off in the Pacific or somewhere in Europe. The rat bastard was bedding the wives of enlisted men. It was one of the lowest thing you could do.

Sully lured Remo up to the bar with an offer of a free shot of rye. When Remo rushed over, Sully dry-gulched Remo and almost blinded him with a pool cue. Both of the cops who showed up to break up the fight were vets who fought Nazis in Europe. When Sully gave them the lowdown on how Remo slept with GI's wives, the two cops handcuffed Remo and helped Sully nearly beat him to death. The tossed Remo's limp body in the alley. Sully 86'd the lowdown swine for life.