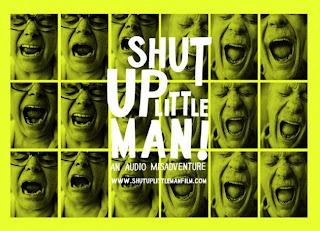 I'm a voracious reader. On Tuesday, one book arrived at 8pm and by 4pm the next day, the book was done. I took me 20 hours to devour 300+ pages. During that brief time, I slept a few hours and sweated a couple of basketball games and endured a couple of writing sessions, but you get the gist. If it's a good book, I won't put it down and will read it straight through. If it's a shitty book, then I'll struggle to read the first 50 pages, then find excused not to read the next 50, before I give up. If I don't read the next 50 or 75 pages within a week, then the book is doomed and it gets tossed into a depressing pile of "started but never finished" books. Once a book gets banished to that pile, there's less than a 1 in 5 chance that I'll ever pick up one of the books again and finish it. I feel bad... but if I had more time (like if I was bedridden with a horrible disease or stuck in prison), then I would devote it to finishing more than half of those books. At this point... life gets in the way.

The technology has gotten to a point in which I have access to more documentary films than ever before. A few years ago, it was impossible to find any videos on YouTube that were longer than 10 minutes. The technology improved and now you can view monster vids (some in excess of four hours). I'm surprised how many full length documentaries you can find (in addition to a bevy of docs split up in 10 min increments or 9 or 10 parts) by just searching on YouTube. I've watched hundreds of documentaries, both good and bad, over the last year or so just sifting through the archives on YouTube. It's easy. If you like chess, then do a search for "chess documentary film" and maybe you'll stumble across an episode of a BBC broadcast about Bobby Fisher that someone uploaded. Search often. New videos are being uploaded and old ones are getting yanked by the YT police.

In addition to YouTube, there's a fair amount of documentaries on Vimeo. Do a thorough search. It's an amazing way to kill an evening rather than channel surfing on the boob tube and getting bombarded by endless advertising. Documentary films were created not to make money, but to educate the public on a specific topic or share the story about a special person(s). That's why docs are an invaluable tool to help educate your children without an ulterior motive or agenda by multi-national corporations. Those sites like YouTube and Vimeo, offer you freebies. If you're into Pirate Bay and other torrent sites, then you have access to an entire universe of docs.

If you have a subscription to Netflix, then take some time and look at their archives. Plenty of great docs in there, especially in the music department. If you are a member of Amazon's PRIME shipping club, then take advantage of the ability to stream TV shows and films from their free catalog. Amazon has a smaller collection, but you'd be surprised what you can find. I watched a random episode of Ken Burns' Baseball recently and at the end of the summer,  I revisited his entire series on Jazz.

Over this past week or so, I watched four documentaries of note that I highly recommend: Queen of Versailles, PressPausePlay, Shut Up Little Man, and Herb & Dorothy.

Nicky recommended Queen of Versailles. We saw a trailer over the summer and it was playing at a theatre nearby, but we never got off our asses to go see it. I think I saw Searching for Sugarman instead. Anyway, she eventually watched it whenever it came out on Netflix. It was in the queue for me and I finally broke down and watched it.

Queen of Versailles was originally pitched as a documentary chronicling the exploits of a trophy wife of real estate tycoon David Siegel (one of the wealthiest men in America), who set out to build the largest mansion in America that replicated the actual palace at Versailles. During the complicated construction of this behemoth property, the financial crisis of 2008 hit and the family eventually had to abandon the project while David Siegel scrambled to preserve what was left of his crumbling real estate empire. Lauren Greenfield directed the documentary and she shed the light on a dozen or so interesting side characters that she interviewed who could have had their own documentaries about them (from their limo driver to their maid and nanny). There's one scene involving a dead lizard and another about going to McDonalds in a limo. In one sense, this was a film about the drastic affects of the financial crisis, yet in another breath, it's an example of gross decadence, opulence and wealth.

I caught PressPausePlay, which you can find a complete version on YouTube. It's a documentary trying to explain how the digital revolution drastically altered pop culture and helped create an explosion in artistic endeavors -- both good and bad. For the first time ever, more artistic people have a chance to connect with other artists and find an audience without having to go through the "machine" (recording industry, film industry, publishing biz, etc.). However, the technological evolution has also led to a dearth of terrible content, which is worrisome because the fact that anyone can have access to a creative outlet has thereby lowered expectations of what is actually high-quality content. Our entire society's standards are sinking lower and lower as our culture becomes a cesspool of mediocrity. There's a slew of interviews with highly successful people who reached the pinnacle of their fields. You also get to see Seth Godin sitting on a gigantic couch, while sipping coffee and extolling the virtues of web marketing.

Last night, I stumbled upon a gem called Shut Up Little Man. If you enjoy my rambling posts about my neighbors, or you dig Nicky's tweets about our eccentric neighbors, then you'll love Shut Up Little Man. In 1987, two recent college grads split from the Midwest and relocated to San Francisco. They found a cheap and shitty apartment in the Lower Haight, which was super seedy back in the late 80s. The discovered why rent was so cheap... their next door neighbors were a couple of old drunks who got into vicious screaming matches and the occasional fist fight. The two kids started recording their fights, at first for their own safety and to document the incidents just in case something crazy happened and the police needed to be involved. After a while, they got addicted to recording the fights and after two years, they acquired a ton of content on cassette tapes. One of them added the most hysterical snippets to various mix tapes that got distributed and copied among their friends. When they expressed an interest in the "old men fighting" they started to distributed entire tapes of different snippets of their arguments. This was pre-internet so it took a while before the old men fighting caught on, but it became an underground sensation and inspired different artists, actors, and filmmakers. I can only wonder what would have happened to those old men if this happened in today's You Tue world?

After we watched Shut Up Little Man, Nicky and I spent a good hour or so watching neighbors fighting on You Tube. Thousands and thousands of videos of neighbors getting into fist fights and shouting arguments, yet none of them had the same passion and humor factor as the old men fighting in San Francisco.

Last week on Valentine's Day, Nicky and I watched Herb & Dorothy, a touching story about how two civil servants (a librarian and a postal worker) living on a modest income (in New York City) amassed one of the most valuable art collections in America. They began in the 1960s and actively collected minimalist art over the next five decades. Along the way, this adorable couple befriended many artists and became pseudo-celebrities in the snooty and pretentious art world as it evolved over the last half of the 20th Century. Instead of cashing in on the value of the art, they donated their entire collection to the National Gallery in Washington, DC.
by Pauly at 2/24/2013 01:47:00 PM