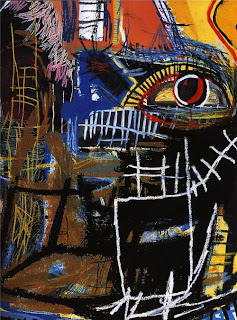 Fill in the blanks. Sometimes it's all about filling in the blanks. I'm not talking about mad libs either. The blank spaces are the where you insert your own music. Even the to the chaotic nature of life needs its own soundtrack. You can sing a sad song, or a breezy ballad, or you can go all punk and smash things, or just rock it all out. It's up to you.

The Joker often reminds me that we create our own realities. It took me a long time to figure that part out. It's easier to go on autopilot have our realities chosen for us. It's easier to remain trudging through a stream of toxicity than seek joy in manifesting positivity and more pleasant thoughts to help pull us out of the doldrums of day-to-day life. At the same time in order to hide from fear we often jump into a murky pool of anxiety, misery, and self-doubt. Hey, taking a plunge into self-loathing as horrible as it sounds, is less painful than confronting the things that instill the most fear in you. Big Pharma rakes in billions of dollars hawking happy pills that are just life preservers so we can take plunge into a murky pool of misery and not worry about drowning. That's a nifty temporary solution until things take an abrupt turn and shit gets crazy real quick when everyone gets swept up in rough seas.

You know those mornings when you wake up with a clunky and upbeat tempo ringing through your head like an overloaded van with bald tire driving on cobblestones? Uneven and rough. That's a daily mental commute that had not been smooth for years, yet you do nothing about it and remain stuck in a loop, darting through the darkness under bridges and through back alleys to avoid getting nabbed by the Man. Exhausting and draining trying to evade the humorless authorities, smug arbiters of taste, urine-thirsty trolls, and moral score keepers.

Sometimes I feel the Man leaning over my shoulder with the judging eyes of a disappointed teacher, unable to accept responsibilities for their failure as an educator and passing all the blame onto the student. Hey, no one signed me up for this fucking class, let alone enrolled me into this school. I just show up one day after I got dropped off by my parents and started learning everything on the fly. I've been making it up as I go along. No one ever handed me a standard operating procedures or a syllabus. I've been an adult for two decades yet still feel like I'm a snot-nosed Catholic school kid worried about whether or not the nuns are going to be pissed off that I didn't finish the assigned work. Stuck in a compulsory school is worst than being in prison because at least you committed a crime to get imprisoned and had some sort of choice in the matter (choose to obey/break a law). After a while I found every excuse imaginable to cut this cult-like school of life and play hooky and stay home sick. I finally broke out of the system, yet I still feel the burning sensation from the disappointed eyes of malcontents flashing evil death stares.
by Pauly at 3/26/2013 11:30:00 PM