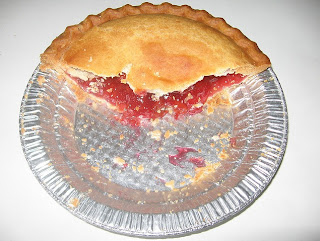 I like pie. I ate an entire cherry pie inside of 24 hours. Okay, I really love pie, but not just any pie. It's specific. Cherry pie and key lime pie.

Cherries are not in season so the bakeries don't have any cherry pies. Nicky was kind enough to stop at Ralph's to pick me up a cheapo cherry pie. I was bogged down with watching and scouting and gambling and indulging in March Madness games with my makeshift command center. I'm only few steps away from running a hedge fund out of my apartment. Or cult. Or both. How about a cult about a hedge fund? Nah, that won't work. But a hedge fund about cults? That could work. Makes more sense to invest stocks in companies that produce products that are only bought by brainwashed people that are vigilant and self-righteous about their support like Apple, Coca-cola, and McDonald's.

Sorry for the tangent...

I devoured the cherry pie and ate it a quarter at a time, which is the equivalent of two slices. I crushed 25% of the pie within moments of Nicky walking in the door. I didn't even bother to cut a slice out of the tin. I grabbed a fork and dug in while Nicky rolled her eyes at my barbaric behavior. I plopped down in the couch and yelled at the TV (probably a bad call from one of the blind-dumb-mute zebras reffing the March Madness games). I inhaled a chunk of the pie and put it away. After dinner I ate another quarter and inhaled two more slices.

This morning after breakfast I ate another two slices and only 25 of the pie remained. I could have been a total pig by waking up to eat the pie while sitting in my boxers. I had the common sense to wake up and do a few hours of work before cooking a sensible breakfast and then relaxing for thirty minutes before I crushed more pie.

I patiently waited until dinner ended before I finished off the pie. The last 25% was gone within 8 seconds. It wasn't pretty. Now all I can think about is... more pie.

I spent a few hours the other night watching different videos on YouTube of grandma-types sharing their recipes. It was funny because these are not what you cal tech savvy people, but they had 1) a great story to tell, and 2) impart some wisdom by passing down a family recipe.

The last part was compelling because these old ladies were not just copying their recipes on an index card to hand out to friends at a tupperware party.... rather, here's someone's sweet old grandma from Iowa sharing her fifty year old recipe for cherry pie for the entire Internet. Some of the videos had 300 hits, some had 30,000. One had 250,000. That's the size of a small city. All those people watched grandma make a cherry pie from scratch.

That's when it hit me... there's hundreds and thousands of other grandmas sharing recipes about cherry pies and blueberry pies not to mention dozens of other recipes for desserts and other dishes. Then toss in all those other languages and you'll find millions of people sharing family recipes last several generations, maybe even up to a century or more. That's mind boggling. sure, you can buy any cookbook at a local bookstore or watch the fucking Food Network, but there's something inspiring about average people -- particularly septuagenarians and octogenarians -- who have flocked to YouTube. Even grannies need a means of socializing, or swapping wisdom, or feeling better about themselves by showing off their deft baking skills.

Over the summer I ate a mini-cherry pie in Cincinnati. It was one of the highlights of my trip through Ohio last June/July. I had not seen any since then so I started digging through the archives at YouTube seeking out how to make a cherry pie and if it was possible for someone like me (a stoner with a voracious appetite for cherry pie and zero culinary skills) to learn how to bake pies, especially mini-pies. I found a super-chipper and peppy MILTF who posted a video about making mini-cherry pies using muffin pans and thought that was ingenious.

If I want mini-pies, I have to win the lottery and then hire a mad scientist from Switzerland and commission him to construct a special machine that alters the molecular makeup of objects and shrinks things... like cherry pies.
by Pauly at 3/23/2013 11:18:00 PM