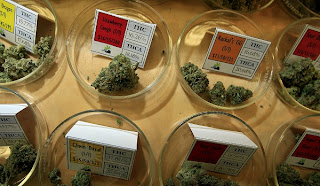 I visited the doctor yesterday. My medicinal marijuana prescription expired. The original prescription lasted one year and acquired my "weed card" in January of 2012 when we lived in San Francisco. My original doctor was located roughly a mile from our apartment, or about 17-18 blocks away in that grey area between the Lower Haight and Lower Pacific Heights. The doctor's office looked like any other medical office except no one wore scrubs. The receptionist was an older looking guy that reminded me of a hipster version of Anthony Bourdain. He made me fill out a bunch of paperwork and I waited about ten minutes before the doctor saw me. The previous patient exited the office and he looked like an old Hells Angels... scowl, bad-ass motherfucker, bald head, tons of fading tats surrounded by new ink, and a bunch of scars on his oblong head. Battle scars. The whiskey used to make him do stupid shit like pick fights against three other dudes. The mary jane calmed him down and helped his arthritis. Even bad-ass biker dudes eventually grow old.

My doctor in San Francisco surprised me. It was a she and she looked like every other 40-something year old woman in black yogapants that wandered by our apartment in LoPac with a mat rolled underneath her arm. I expected to see an older, shady doctor who was strung out on coke or needed to make a quick buck because he had two ex-wives to pay off and three kids on the verge of college. Or I expected to see some burned out hippie and new age spiritual guru using groovy terminology and trying to get me to sign up for marijuana aromatherapy pottery class. Nope, my doctor was a certifiable yuppie who liked money. You didn't see too many of those anymore, especially in San Francisco.

She took my blood pressure and asked me random questions while scribbling down on a chart. She gave me the run down about different types of therapy to help cure insomnia and chronic back problems. She even suggested a few rubs and ointments. We both agreed that the pharmaceutical route was bad and the natural route was safer, especially long term. Painkillers turned me into a junkie constantly chasing that first high of the day, while sleeping pills like Ambein had awful side effects, like sleepwalking. I told my doctor about the embarrassing time I urinated on a marble floor at a swanky hotel in Melbourne, Australia... and then my girlfriend woke up in the middle of the night to use the toilet and stepped in a puddle of my cold urine.  At the end of our brief chat (under ten minutes), she said it was her professional opinion that I should use marijuana to help my ailments. I could not have agreed more. She gave me my papers and I was officially a medical marijuana patient in the Republic of California, and could purchase marijuana, hash, and other products at approved dispensaries anywhere in the state.

My "weed card" was good in San Francisco, Oakland, Tahoe, and Los Angeles. All I had to do was show it and my ID and I could walk into any dispensary in California. If I was a new patient, I had to fill out the paperwork which too no longer than 10-15 minutes. After that formality, I could come and go as I please.

The closest dispensary in San Francisco was next to a BBQ joint and across the street from a popular music venue. I popped in there once a week. Nicky liked a dispensary in the Lower Haight called the Vapor Room and that was San Francisco's only Amsterdam-like cafe. We never hung out there because it was always packed, but we picked up medicine there once a week. They had a great high-end selections and their brownies were especially strong. One of the guys we played poker with suggested a different dispensary in the Mission, which offered up a cash bonus for every $250 you spent. Weed-rake-back. Great selection too of indoor and outdoor products. We went there a lot during the last few months we lived in San Francisco. It was sometimes so crowded that there was a line out the door. It didn't look like a dispensary... almost looked like a bank. Seriously. Man, I really missed that place for the deep discounts for regular patients.

My initial card expired and I renewed in Los Angeles. Nicky drove me up to West Hollywood to get it done at a place we passed by a few times that I swore I thought was a smoke shop and not a medical office. Welcome to the fast-food version of medicinal marijuana doctors. It was an inexpensive referral, but it felt more like a sham than my original consultation in San Francisco. You'd think that in L.A. that the weed doctors would put on a little bit more of a show and pretend to be an actual doctor instead of someone who is taking advantage of the system and printing money by offering up a signature on a piece of paper. But that's how the racket works at that doctor's office. I guess they figured... what's the point of putting up the rouse? Churn 'em and burn 'em. I saw the sign in list and the doctor had seen about 20 patients in three hours. In the half hour I was there, the doctor saw three.

Imagine if you had to see a doctor to get a drinking card? And you had to convince a professional physician that you needed whiskey to heal your anxiety issues or help soothe the pain of arthritis?
by Pauly at 3/05/2013 08:21:00 PM