One of the benefits of YouTube is stumbling upon random stuff like episodes from Art Bell's old radio show in the 1990s. This was still before people had widespread access to the internet, so for folks curious about paranormal things, UFOs, and conspiracy theories (essentially anything related to the X-Files) had to stay up late to listen to Art Bell's show. He interviewed thousands of experts and fielded phone calls from crank callers, crackpots, and every kind of the craziest of the crazies.

Every once in a while you had a caller tell you an incredulous story that seemed too insane to be fake. Enter Mel Waters, the guy from "Mel's Hole." 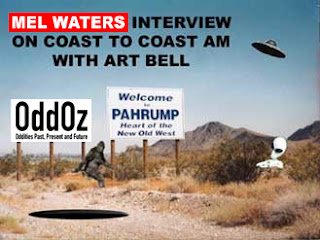 Supposedly Mel found a hole on his property outside Ellensburg, WA. Debunkers will tell you that Mel doesn't exist or made the whole thing up. But there's supposedly two holes and another one in Nevada that Mel got invited by local Basques to investigate.

What's up with the holes? They go on forever. Who knows how deep they are. Were these entrances to Middle Earth? Was the Earth really hollow? Did the government dig the holes looking for oil and minerals? When in doubt... was it ancient fucking aliens?

Locals in Washington state had been dumping trash into the bottomless hole, which was roughly nine feet in diameter. Mel had some unusual experiences around the hole. Like weird shit that comes right out of an episode of Lost involving strange coins, Nazi guns, and whale bones found in trees. Art Bell suggested it had something to do with parallel universes. animals wouldn't go near it. Native Americans suggested the holes were part of the spirit world and it should be avoided because it was the source of evil. Red Elk, a medicine man, said that he visited the holes when he was a young child and that centuries ago the holes had a Stonehenge-like structure around it. In different interviews, Red Elk alluded that the hole was not bottomless, but 27 miles deep and it was actually a blow hole by Mt. Rainer, but connected by other tunnels and passageways.

Mel sold his hole to the government.They gave him $1 million a year to lease his land and he moved away to Australia for a few years and then he did something stupid -- he returned to American and felt compelled to call up Art Bell and reveal the mysterious of the hole on his radio show. Now, word was out about Mel's Hole. The government stopped paying him and things got really freaky. Mel said he was in a police van and that's the only thing he remember before he lost time for over a week and he woke up in an alley in San Francisco. He had gotten his ass kicked and his were molars removed. He couldn't remember anything that happened to him.

A second hole exists somewhere in Nevada and plenty of strange things happened around that nine-foot-wide hole, which is supposedly on government-owned land (BLM). Local shepherds, descendants of Basques that settled in the area, invited Mel to check out a hole that had been there for as long as their first settler arrived from Europe.

Mel lost me when he told a story about lowering a sheep into the hole and when they pulled it back out an hour later and conducted an autopsy (by a local butcher). The sheep's insides were cooked and  seal-like animal inside the sheep that crawled back into the hole. The creature was very similar to something described by multiple Native American legends about a seal-like creature that lives underground and can travel between different Earths. Of course, other legends include 6-foot tall reptilians (similar to the Sleestak from Land of the Lost) who live deep underground and kidnap human women so they can mate with them, or kill humans to grind up their bones.

At the Nevada hole, Mel conducted another experiment and lowered a bucket of ice to see if it would melt. Instead, the ice emitted some sort of yellow flame when they pulled the bucket up. When one of the locals took home an ice cube, he kept it on his stove and used it as a source of heat. Mel described it as an "unimaginable source of power" that is similar to Ice-Nine from Kurt Vonnegut's novel Cat's Cradle.

The ice cube eventually got unstable and destroyed the guys kitchen's floor and pulverized the entire cabin. The stove began to sink into the ground. When the local authorities were called, they immediately contacted the federales who in turn showed up with the Calvary, which included the FBI, Men in Black types, the military, and other scientists from top secret government agencies. Art Bell suggested that whatever changed that ice cube was probably causing another hole! No one had heard from Mel in years. He always said he wanted to be dropped into the hole after his death.

The Holes could have been an entire season of The X-Files or turned into really bad para-horror films. Heck, the holes are so mysterious that it inspired a half-baked post here and I'm sure I'll pitch at least one screenplay about Mel's hole.
by Pauly at 3/25/2013 05:39:00 PM