Long day. Long week. Long weekend coming up. No complaints. I wouldn't trade this time of the year for anything else in the world.

March Madness. This is when I pull  myself out of  the doldrums of winter and seasonal depression. I'vealways gotten the holiday blues starting around Turkey Day and carrying over through Christmas and spilling over into the New Year. Relocating to California, especially Southern California, has done wonders for my mood every winter. It's easy to be in a chipper mood when you're basking in ubiquitous sunshine.

I savor every moment of March Madness because this is one of the few perks of being a freelancer who works mostly at home. In any real-world job as a desk jockey, I'd try to slyly sneak games while at work or extend lunch hour to get as many games in as possible. Luckily, I can sit on my couch and watch 12+ hours of basketball mostly because of my career choice and relationship choice. If my girlfriend was cool and she knows that this is a part-time job for me in the short-term and material for a book in the long-term. I'm in a comfortable situation to watch the games guilt-free on my couch. Actually it's not a couch, but an office chair. I temporarily moved my office to the living room, including the desk and chair. Part of our living room looks like a set from the Tonight Show with how my desk is situated against the curtains and a couple of chairs. We could actually film a talk show in my apartment now. YouTube supports live streaming these days. I probably should do a show for shits and giggles, but I'll need a sidekick and/or musical host. Submit your resumes ASAP.

My March Madness routine from Thursday...

Up before the dawn. My alarm, set at 5:55am, woke me up. I spent the first 10-15 in bed looking at my CrackBerry while Nicky was fast asleep on her side of the bed and had stolen 85% of the covers during the middle of the night and was completely bundled up like a burrito. In the first few minutes of waking up, I listened to homeless people rummage through our trash bins for recycle items, which was a humbling reminder that I'm just one bad beat away from digging through dumpsters. After a quick triage of emails, text messages, direct messages, etc., I eventually rolled at out of bed at 6:15am and exactly was three hours before the tip off of the first game of the day. I made a bee line to my laptop. Actually, I opened up two laptops. One had Twitter and betting lines while the other had Skype along with the infamous spreadsheet otherwise known as HAL420. I scanned the injury reports and checked the betting lines to compare any moves from the night before. Depending on the situation, I put in bets before I crash (overnight lines) if I expected the lines to move the other way. If I was hoping for the line to move in my favor, I waited until the morning. If I did not find favorable numbers I liked in the morning, then I'd go line shopping until I found the best possible number. If not, then I'd wait to see if it changed before tip off. I looked at any shared intel and gathered up the daily picks from trusted sources from fellow gamblers. At 2.5 hours before tip off, I headed to the kitchen and brewed a fresh batch of iced tea. English breakfast tea. Six tea bags. One lemon. Full pitcher. Eye opener. Woke me the fuck up. After a quickie shower, I hovered around the laptops and watched the lines move back and forth and listen to sportsbetting podcasts for an hour while I pounded a few pint glasses of freshly brewed super-strong iced tea. I cranked up some jazz  (usual suspects... Lee Morgan, Monk, Coltrane, Miles) and finished up a post about underdogs for Ocelot Sports. With about 45 minutes before tip off, I published it. I swapped texts and IMs with friends to find out their positions before I scanned the lines for any changes and put in a bet or two. Once I had a better idea of my positions for the day, I wrote an email to a few friends with my picks, Ocelot's positions, and the best bets from other notables.  I finally updated Ocelot's tumblr, where I publicly posted daily picks for more friends to fade or follow (mostly fade). Then I waited for the bombardment of last minute text messages from friends waking up on the Left Coast, or other lazy degenerates waiting until the last minute to put in bets. Sometimes I get last second intel about huge wagers that one of betting syndicates made in Vegas or offshore. I always frantically look to see if we're on the same side, and sometimes I bite and tail the wiseguys. I never watch the pregame shows. I have no need for their tomfoolery and prefer music over their genius commentary. With a few minutes before tip off, it was time to set up all the viewing stations -- 2 TVs, 2 laptops, and an iPad, not to mention my CrackBerry which I use to look at Twitter and field 100+ texts every few hours. It's redonkulous. I have to turn the alert sound off because it went off every few seconds. Once all the bets are in, I can relax and fry up some bacon. Yeah, breakfast and bingers! I was starving with the exception of eating a banana sometime within the first hour of being awake. The menu? Homemade thick-cut bacon & egg sandwiches on English Muffins with more ice-tea and a side order of bong hits. Behold, the breakfast of champions! It was finally time to settle in and watch the first game while chowing down on bacon as the apartment reeked of freshly cooked bacon and OG Kush.I could hear my neighbors go off to work while I ripped a couple of bongs. I still kept an eye on the betting lines and waited for the second and third and fourth games to come on so I can maximize my visual stimulation. With four games on at the same time, I was guaranteed to have a wager on at least one of the games. With our advanced technology, I streamed games via laptop (hooked up to one TV) and iPad (to stream channels via our local cable provider's app, and ignored the official CBS app). I also opted for an (illegal) European streaming site on my laptop because it didn't crash like CBS's website. At that point it was 10am or so and I had been awake for four hours. Somewhere between 11am and 11:30 Nicky woke up and rolled her eyes when she saw the degen set up in the living room. I'm sure she must feel weird to wake up and find the furniture in the living room was rearranged so I could turn it into a mini-sportsbook... 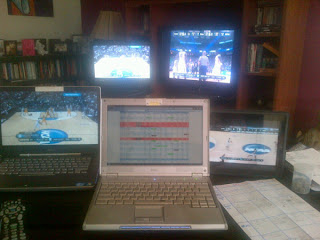 From 9:15am to around 5pm, it was nonstop basketball and line watching for the later games and the next day's games. After eight hours at the grind, I took a break and brewed a second batch of iced tea and walked around the block to get fresh air and head to 7/11 to grab M&Ms. I have an awesome girlfriend who happily whipped up gourmet meals like blackened salmon before I sweated the last batch of late games. The last game ended around 9:30pn or so... or about 12 hours after the first game tipped off. Sixteen games. Dunzo. The night wasn't over. It was time for mellow music (can't stop listening to Foxygen) and couple of hours of analyzing the day's transactions. I looked over the next day's action and put in a couple of bets over the overnight lines. I downloaded a Jimi Hendrix bootleg that G-Money sent me and I wrote for an hour or so until my eyelids get super heavy and the words started getting blurry and looked like German. Unless I was so tired and wasted by that point that I was actually writing in German. Yeah, when I can't figure out what the fuck I was writing, I knew it was time to call it a night, so I save the rough draft of the post I wrote for Ocelot Sports. Nicky was working late, so I said goodnight and then finally had time to decompress by listening to random podcasts (an old episode of Kevin Smith on Joe Rogan) while pulling a few more bong hits. By then it was well after Midnight and I was exhausted. I crawled into bed and knew that the alarm would wake me up in 5+ hours. When the alarm screeched at 5:55am, it was time to repeat the process.
by Pauly at 3/22/2013 11:11:00 PM