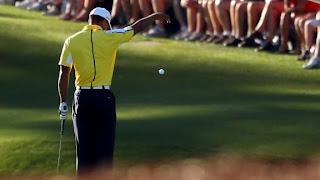 I woke up early to watch golf.

Okay, not really. I woke up early to do finish my taxes, but I was eager to peek in on the progress of a bet I made against Tiger Woods winning the Masters. It seemed like a risky bet at the time. Tiger had just won his second tournament in the month of March and his third of the year. He regained the #1 ranking in the world since he tumbled out of the top spot in 2010. His odds to win the Masters were shrinking and everyone jumped back on the Tiger Bandwagon. It was the perfect time to bet against him. Anyone but Tiger.

When Nicky woke up on Thursday she saw me sitting on the couch with the TV on. It was tons of green. Golf in HD. Nicky shook her head. She had put up with a few weeks of college basketball and was more than patient and cooperative with the madness of March Madness. The last thing she wanted was another marathon of sports. She rolled her eyes as she waltzed through the living room and went to the kitchen to make a batch of coffee.

Tiger posted a solid opening round (70), but had an ugly Friday (73), which resulted in Tiger making a foolish mistake that cost him a two-stroke penalty and might have cost him the tournament. I saw the news as soon as I woke up and knew that my wager was looking very good. Tiger had a good Saturday all things considered (70) and I have a feeling that Tiger will shoot in the high 60s on Sunday, so that penalty will most likely come into play. Although Tiger had never won a major by coming from behind, I still hope Tiger makes a run. It will give me a heck of a sweat on Sunday, as I root for anyone except Tiger.

The only other guy I'm rooting for -- Freddy Couples -- is still in contention, because the 14-year old Chinese kid is near the back of the pack. Couples won in 1992 at a time I started to get into golf and played somewhat regularly during college. I had just gotten a new set of clubs and was hacking my way around public course in Atlanta struggling to break 100. I had more fun than anything else learning the game. My friends were total drunks and a few of them were potheads and we had a blast getting blasted while toking up on the course.

I worked at a country club one summer and experienced what a southern country club was really like. Talk about serious class issues. I could write a novel about it. Sort of like Caddyshack meets Godsford Park. I worked in the tennis center and prepped clay courts. That's when I got called a "cracker" by one of the members who happened to be losing his tennis match and decided to take it out on the help. He didn't know I was a college student and assumed I was a local redneck. Didn't matter. It was one of those instances when rich people feel as though their entitled to shit on the help/ I didn't say a word and bit my tongue (I was too exhausted to say anything anyway) but thought it was funny because I was he New Yorker and he was the Georgia resident. If anything, he was the fucking cracker.

I hated the country club job, but I hated mostly every job I ever had, so that's not saying much. On a positive note, I was in great shape at the end of that summer especially because I rode my bicycle to/from work everyday through the quaint Lullwater section of Atlanta.

Anyway, Freddy Couples won the Masters in 1992 and I was pulling for the guy. Since then, he had back problems and never won a second one, but I'd love to see him make a run and give these younger golfers a run for their money. If Tiger makes a run and Freddy gets hot, then CBS' suits will get a stiffy at the ratings on Sunday afternoon.