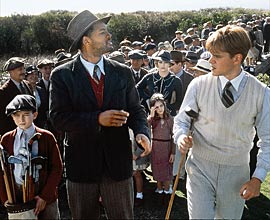 I blame the insomnia for my lapse in judgement. 2am. No sleep. No dreams. Just the warm glow of the TV flickering in the darkness. I blame the marijuana for making me lazy. The remote control was on top of the TV stand a few feet away. I was nestled into the couch. Sort of glued to the comforts of a special pillow arrangement that gave me maximum support for my aching back. I was lazy and comfortable and unwilling to move, so I was tuck watching whatever was on the channel. In this case it was The Legend of Bagger Vance (2000 directed by Robert Redford).

I enjoy sports movies, but this one was utterly horrendous. I was shocked that Redford directed such a shitty flick. Bagger Vance was originally a book and like most books, they are superior to their film versions, but the original manuscript was much better because it relied more on an old tale from India from the sacred Bhagavad Gita, about Krishna helping a warrior get his mojo back. Stuff like that makes for great literature, but it fails to translate on the big screen.

Bagger Vance was a $60-million flop. Most of that budget went to pay for the bloated salaries of Matt Damon, Will Smith, and Charlize Theron. The rest went to the art department who did a decent job replicating the tail end of the Great Depression in the deep South save for one thing... everyone should have been skinnier. People only ate once a day back then... and that was if they were lucky. Weight aside, Bagger Vance is as much a subtle period piece as it is a golf movie. It was a time when everyone wore ties... even the unemployed broke dicks down on their luck.

Anyway, as the story goes... the richest man in Savannah, GA built a huge golf resort but construction was completed smack in the middle of the Great Depression. Without any wealthy guests, his resort is a failure, so he killed himself. His grieving daughter (Charlize Theron) inherited the golf resort and its debts. She decided to host an exhibition tourney between the world's two best golfers (Bobby Jones and Walter Hagen) in order to raise her resort's profile. The mayor wants one of their golfers to be represent Savannah and the town picks one of their homegrown boys -- Capt. Junuh -- except he hadn't played in over a decade and has serious PTSD from WWI. Back then, it was called "shellshock." Capt. Junuh (Matt Damon) could have been a great golfer but he returned from the war a different man. Unable to cope with his demons, he gave up the game of golf for good and spends his night drinking whiskey and playing cards with local derelicts. To complicate things, Junuh used to bang the resort owner's daughter and she's been a scorned lover ever since he left for the war.

That Matt Damon character sounds familiar right? It changes over the years from story to story. In Westerns, it's a gunslinger who lost his bravado. In this instance, it's a golfer who lost his swing. Oh, and there's a love interest. Typical story... a "war" puts the kibosh on a relationship.

And what's up with the title Bagger Vance? Yeah, the caddie is named Bagger Vance (Will Smith). Bagger literally appears out of nowhere once night and offers up his caddy services to a washed-up Junuh, who has four weeks to get sober and get ready to play. Yet, you barely see his development from rusty golfer back into his robust former self. Aside from hitting balls in the dark while Bagger Vance dispatches zen-like phrases, or a quick scene of Junuh hitting balls in the rain, it looks like that part of the film was heavily edited for time purposes. To me, that would have been the most interesting part of the film... the painful and arduous process of getting back on the horse... is more appealing that the glory of the comeback.

The golf scenes were shot majestically. They tried to use 1930s-era equipment so they played with wooden clubs. Golfing attire was still very similar 80 years ago... everyone was still dressed like a pimp.

I vaguely recall Spike Lee getting furious with Will Smith and Spike called him out for taking a huge paycheck to do a "Driving Mr. Damon" flick that ignored serious race issues that plagued the South in the early part of the 20th Century. Spike criticized the film for playing up the mythical "magical negro," which he thought was a cheap ploy to move a along story, while ignoring all racial undertones.

At the time I didn't think anything of Spike's outrage (most critics assumed this was venom by Spike because Smith picked Michael Mann to direct Ali over Spike), but after seeing the flick I can understand Spike's frustration on Will Smith helping Hollywood continue to gloss over America's race relations.

On the other hand, I saw Bagger Vance more like a Yoda for Matt Damon's Luke Skywalker. Yeah, it's hokey and absurd to think that Bagger Vance is literally some dude who walked out of the shadows and shows up out of nowhere to be a caddy who dispatches astute wisdom on how Damon can get his golf swing back, overcome PTSD, rekindle his love life, re-capture his love of the game, and somehow play 72 holes of golf in two days without taking a single drink. But that's what happened. Behold, the magic of Hollywood's magical negro! Yeah, the more I think about it, Spike Lee was right.

Good things: cinematography... the Georgia coast is stunningly beautiful. Also, there's a scene with Grantland Rice, who shows up to cover the match, and they refer to him as the greatest sportswriter in America.

Bad things: Charlize does not get naked. Her accent is inconsistent and more southern than Savannah (you have to had lived in the South to notice the distinct difference to a coastal Southern accent that you will predominately find today in Charleston and Savannah). It also seems as though Damon drops his weak-ass attempt at an accent about 1/3 through the film.
by Pauly at 4/22/2013 04:20:00 PM