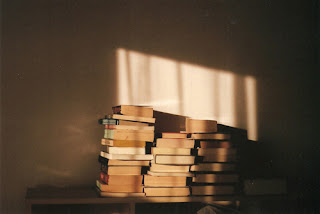 Sunlight. I prefer to read by sunlight. I'll find any location to read (on the subway, on the bench in a park, in a cafe in Amsterdam), but if I had to pick a light setting, I opt for the natural light of that  glowing star responsible for illuminating our universe.

I'm suspicious of people who claim to be bored. It usually means they're one-dimensional philistines who don't read books. Avid readers with any bit of unstructured time fill those gaps with reading. It's like being an alkie. Instead of drinking beers at the local pub... it's opening a book and letting the mind wander.

Most of the stuff I read on the internet is junk food. Even my stuff. Especially my stuff. I'm the equivalent of a fast-food chef.  I can crank out deep-fried content on a variety of topics.

Books are like fine dining. Books are refined and contain deliberate words. I read crap on the web to fulfill my desire for junk food. I read books for a more hearty and wholesome gourmet meal. Of course I'm generalizing here and there are exceptions to both ends... I've come across web content that is like a seven-course meal and there's some books that are like a sloppy fast-food cheeseburger. But you're missing my point... the time you invest in a half-baked blog post is like grabbing a dirty-water dog from a street vendor and eating on the go, whereas a book is like a three-hour feast that requires a substantial amount of investment to consume the meal and then even some time afterwards to think about the manuscript and properly digest it all.

I've always been a book worm and opted for a book over television. I still do. My only addiction is sports and that complicates things. Reading books is way healthier (for the mind) than watching TV or sports because I'm not bombarded with 15 minutes of commercials for every hour I devote to reading. I read books approximately two hours every day. If I devoted those two extra hours of my time to TV, by the end of the week I would have watched 3.5 hours of commercials. That's on top of the usual viewing I make. If I didn't read so much stuff on the internet and didn't read books a couple of hours every night, I'd be spending 5 hours watching TV, which means 80-90 minutes of commercials every day or a good 8+ hours a day. If you watch a lot of TV, you're spending the equivalent of a work day getting brainwashed by commercials and have all of your worst fears and insecurities manipulated by banksters, Big Pharma, and Hollyweird.

I prefer to watch the few TV via DVR so I can zip through the commercials. Even then, you still get visual recognition of logos and such. The shitty aspect about sports viewing is that I'm forced to watch commercials, which are recycled over and over and over. It's horrible during March Madness when I'm anxious about the game I bet on and I get to see the same fucking mobile phone commercial seven thousand fucking times that my head is going to explode.

The best part of NBA League Pass and MLB.TV is the lack of commercials. They are offer up local feeds (so I can get YES for Yanks games or MSG for Knicks games) but they block out commercials. MLB goes to a "Commercial Break" page and an MLB logo, while NBA shows you scores! I got spoiled sweating sports that way. The worst sport to watch is football because  of a nonstop blitz of commercials that makes you feel like Cambodia and Laos when they were getting carpet bombed by Nixon. The worst part of football on TV is that insane commercial before and after a kickoff, so you have to sit through six minutes of advertisements with a touchback sandwiched in between.

I prefer to read by sunlight. Natural light bouncing off of industrial-grade publishing paper is easier on the eyes. I try not to read books late night because of the strain on the eyes, even strong desk lamps. Mine broke a couple of months ago. Actually, the light bulb broke and the lamp is fine, but the lamp was an Ikea piece of shit and the bulb was a weird shape, which meant normal stores did not carry the bulb. It was difficult to buy in real life and super expensive to purchase it online. I found the bulb for... $23... not including shipping. What the fuck? For the price of a replacement bulb it was cheaper for me to buy a new desk lamp. In this case, planned obsolesce backfired. I found an alternative lamp for under $10 and it included a more common bulb.

Man, I'm starting to turn into that curmudgeon that says "They don't make shit like they used too."

Three books arrived on Saturday and two of which I needed to read for a work project. I picked up one of them was 99 cents and the other was a fucking penny. Yeah, two books for a buck. I wanted to jump right in and start reading but couldn't figure out where to start, so I read little bit of each book on Saturday. On Sunday morning, I picked one up by random and started reading in my office with the natural sunlight.

Enter the distractions. First the Knicks game, which tilt me (see below). Then my upstairs neighbor gave violin lessons on Sunday in the space right above my office. Fuck me. Her students are not-so good and it's torture to hear them stumble through violin screeching that sounds like two cats getting sawed in half. When she finally finished the lessons, the our nextdoor neighbors decided it was their turn to make a lot of noise. Someone in the building next door recently moved in and had a house-warming wine tasting party. Rough. 20-30 hipsters and their purse dogs congregated 20 yards away from my office. Bad music. The muffled conversation and yipping of dogs sounded like geese fucking each other with corkscrews.

I was already on tilt by the atrocious officiating in the NBA. I'm not betting on any of the playoff games, but from a fan's standpoint I grew increasingly angrier over the weekend at the horrible manipulation of games because 5 out of the 8 series were on the verge of a sweep and most of the games were lopsided and boring blowouts. I get it. The NBA is a business. A global empire. Sports entertainment. But the refs were blatantly obviously horrendously trying to help certain teams that it became unwatchable. My bud Shamus is one of the most clear-headed and academic minds I know and even he questioned what was going on in one particular game. Even Nicky, who constantly has to play the role of Agent Scully to my conspiratorial Mulder, noticed something was amiss. Then again, she has a deeper understanding of show business and TV ratings. In Hollywood terms, sometimes a TV show milks a specific storyline over a full season in order to keep the viewers engaged for the duration. In NBA terms, they want to extended their storyline an extra game or two in order to rake in more cashola from ticket sales and ad revenue. That's cool... it's big business... just try a little harder to not make it so obvious.

Anyway, I was sickened about the state of the NBA and all I wanted to do was tear through a couple of books that I need to read before I started a new work project mid-month. With a limited window of time, I felt like I was banging my head up against the wall to the soundtrack of soused hipster chatter and irksome screeching violins.
by Pauly at 4/29/2013 04:20:00 PM