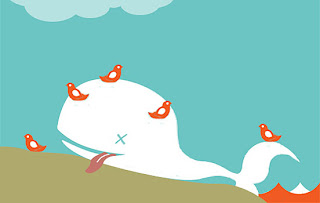 I celebrated my 5th Twitter birthday today according to Twitter. Yes, in 2008 I finally caved in and joined the cult of Twitter primarily to test it out for that summer's World Series of Poker. I was always looking to add a different aspect to my coverage in addition to just "blogging" or writing long form articles. Twitter poked the curious in me and I wanted to give this new social media platform a whirl and test run for several weeks before the WSOP started.

In 2006, I was invited to a meeting with some of the original Twitter developers and I walked away totally overwhelmed and had no idea what they were talking about. Initially, a couple of tech-savvy friends were early adopters (like @JenLeo and @WilW) and I kept a keen eye on how they used it. I found a specific use for Twitter in 2007 when I backed a friend in a couple of L.A.-based poker tournaments and he used Twitter to update his progress.

The original Twitter concept was that it would be a service that sent you "tweets" via text messages because this was a time when the majority of mobile phones did not have web-capabilities. Yes, this was during an end of an era in which mostly everyone did NOT own a smartphone. So I could be sitting in my office or at work somewhere and I got intermittent texts updating me on what friends were sending to Twitter.

Now, aside from a specific task of getting updates of a poker tournament, I didn't really see any importance of Twitter. As time passed (in the tech field, two years seems like two lifetimes), more people starting buying smart phones and Twitter's users exploded, and very quickly "tweets recieved as texts" became obsolete and people got Twitter updates from the website or apps.

I figured out a nice balance to cover the WSOP with Twitter and blogging. I used Twitter throughout the day to update "breaking" news (mostly eliminations), while I used a blog to write a long-form piece capturing highlights and commentary from the day's events. It wasn't a perfect system, but it was the best of both worlds -- instant gratification vs. long-form content.

By 2009, the early-adopters phase had been over for a couple of years and mostly every "brand" jumped on the Twitter bandwagon. It took a while to sort things out, but Twitter had become a valuable source of breaking news. It's safe to say that I found out about 90% of celebrity deaths over the last four years I via Twitter.

I found out about 9/11 through an instant message... and I was living in NYC at the time. My friend from Japan had pinged me on AOL messenger and asked if I was safe because a bomb exploded at the "Two Towers" as he called it. Take note that he said "bomb" because it was night time in Tokyo and he had retired to his room to strum on his guitar and listen to music but he had saw a news blurb about a bomb exploding at the World Trade Center. He hopped online and pinged me. Within seconds I had turned on the TV and saw the carnage. I also logged offline because this was at a time when you had to use a phone line to access the internet via AOL. So whenever you called someone and you got a busy signal, you assumed they were tied up "surfing the information super highway." The moment the modem logged off, the phone rang. My mother worked at a doctor's office in Chinatown and she said they were expecting "walk-ins" from any victims that were Chinese immigrants who didn't have health insurance or were afraid to visit an ER. Sadly, that doctor's office did not get a single walk-in. There were very few survivors that day.

I found out about the Boston Marathon thru Twitter. I saw a tweet from @MerchDawg. He was somewhere in Tennessee, saw a news blurb via Twitter and then passed the news along to his followers. Within seconds, my timeline flooded with tweets. I quickly turned on the TV and waited. It took anywhere about 15 minutes for the first mainstream outlets to break into their daily coverage and report the bombings. At that point, it was at least twenty minutes since the first bomb went off at the finish line. I spent the rest of the afternoon with a keen eye on forums, including a few corners of the web that a lot of people would rather not venture.

When something happens... an event... you have to realize that you will never ever get an objective view of that event unless you happened to be there yourself. Any place that gives you that nuggets of news is nothing more than a filter. Now, some of those filters are obviously slanted. Firstly, it's a business. The people who own the filters have monetary agenda -- which is their prerogative to do so. Some organizations are politically driven so you'll get whatever slant that happens to be. Other spots are pure propaganda.

But right now, 24/7 news channels are in the business of breaking news, so they run with information that has not been properly vetted. This is a huge problem and is the major root of tons of disinformation. Now add to the fact that everyone with access to social media is a "citizen journalist" with a mentality to "win the social media race" of being first to scoop the MSM. That just causes more confusion.

Back in the day, when there was only a single nightly news telecast or a morning edition of a newspaper, journalists worked on stories up until the deadline and they published/aired verified information that had been vetted through multiple sources.

That last line of defense has disappeared in today's GIVE ME NEWS NOW era. So now, it's impossible to trust anything you see as BREAKING from certain organizations because of their desire to be first and not accurate. Old school newspapers and editors know the proper way to verify a story, but the turn around time is too long. Sadly consumers want everything instant rather than accurate. That "gap" is what killed newspapers.

The public has a thirst for information now... they sacrifice accuracy for immediacy.

As a media consumer, you want news NOW but it's coming at a price. The next media titan will be the person(s) who figures out how to have a perfect balance in providing fast, yet accurate information.

We want filters that make us feel comfortable which is why if you have a specific political leaning you will watch a specific news network and troll on their polar opposite.

Twitter is essential because it's about what is happening now. It's the pulse of the now. if you want a sense of what's going on, just tune into Twitter. But that's all you'll get is a pulse. You have to dig deeper to find the real story. Unfortunately, we're a nation of bloated consumers with superficial tastes. Hence, why we're doomed.
by Pauly at 4/18/2013 04:20:00 PM