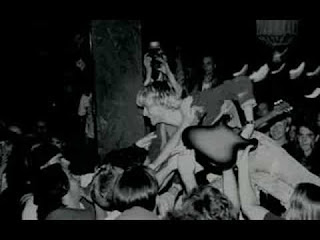 I'm in the middle of a documentary film binge, actually it's more of a rockumentary binge. I have an addictive personality so I try to get hooked on things that won't get me into too much trouble. In this case, I have been dabbling in film and music, or more specifically films about music. The bender started innocently with the doc about The History of the Eagles last weekend. G-Money told me I needed to see it, even if I wasn't a fan, because he knew I enjoyed documentaries. Well, he was correct and the Eagles' doc became a launching pad for this buffet of rockumentaries. I've been on a documentary bender and watched a different doc every night.

In the last week or so, I re-watched several music docs like Crossfire Hurricane (The Rolling Stones), The Miles Davis Story (Miles Davis), 20 (Pearl Jam), and Dig! (Brian Jonestown Massacre and The Dandy Warhols). I also watched a couple of docs for the first time like The Gits Movie (Mia Zapata and her punk band The Gits) and Flight 666 (Iron Maiden). I also re-watched Hype (about the Seattle music scene in the 90s) for the 2,284th time. Oh, and I almost forgot that I watched a few scenes from Some Kind of Monster (Metallica).

I enjoy documentary films and music -- independently of each other -- but if you mix the two together then it's a recipe for serious time suckage. I really lost myself in these docs, which is a good thing in once sense because I've been under a ton of stress from work projects and the grind of sportsbetting, but it was bad that I was in the middle of a doc bender because I really needed the time to devote to doing other work.

I enjoy being able to use the internet while watching these docs because I find myself using Google to look up shit (mostly band history or background clarification) while the doc is playing in the background. After the doc is over, I usually fart around YouTube for an hour or so sifting through different vids seeking out interviews, live concert footage, and some of the deeper material from the musicians that tickled my ears while watching the doc, especially if it was someone who I wasn't familiar with.

Those rock docs have been simmering underneath the surface all weekend long. I guess you can put these docs into two different categories... music I couldn't live without (Miles and the Stones) with a few musical acts that I was familiar with their material but wouldn't necessarily call myself a fan (e.g. Eagles, Dandy Warhols).

I wrote about Hype a few weeks ago and explained how watching a few scenes from the doc is like an instantaneous way for me to leap back into my former self in the late 1990s. The doc gets me nostalgic about living in Seattle in the late 90s during the wake of the grunge fallout as the Pacific Northwest slowly returned back to normal after the mainstream everything (music industry, Hollywood, and magazine publishing) blew through Seattle like an invading army or a torrential hurricane.

The older I get, the more affinity I have for the freedom and openness of the 90s. Everyone in Generation X has a nostalgic view of the 90s, like it was our version of the 1960s... minus all the LSD, hippies, and free love. That topic itself could be an entire blog post, or even a novel, or even a screenplay. But I'm not going to fall into that halcyon trap just yet. I still have a little more of my life to live before I retreat into a cocoon and long for the golden days of yesteryear.

I'm short on time and burning daylight again. But do yourself a favor and the next time you can't figure out what to watch or how to kill a couple of hours, then jump head first into a music documentary on Netflix or find one on YouTube. I really can't wait for March Madness to finish and I complete a couple of work assignments before I can enjoy another music doc bender and re-watch favorites (e.g. The Last Waltz or Bittersweet Motel), or re-watching older docs I had not seen in years (e.g. Stop Making Sense) while discovering new ones.