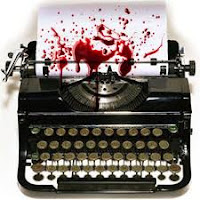 I write quickly, especially in this space. The entire key to blogging is to not think about it and just open up a blank page and let it rip. This only works if you're able to do most of the writing before you sit down -- inside your head mostly -- so by the time you sit down, it flows organically like a conversation. That's why I like writing after a long walk, or a lengthy shower because during that time, I'm organizing those seamless thoughts inside my head or mentally trying to jot dot an outline.

It doesn't always work like that and not everyone does things the same way. I tell aspiring writers to do whatever works best for you, which means a lot of trial and error and finding a routine and sticking with it. You also have to be flexible and work under adverse conditions. It's almost rarely perfect, so the more practice you have working under horrible conditions, the easier it is over the long run.

I require a good chair and the ability to concentrate, which means blocking out an external distractions. Having an office in which I can close the door is wonderful, and I'm fortunate that I do not have to work at Starbucks every day like I know a lot of screenwriters have to do in L.A., or work in some sort of shared space with other annoying writers, or not have any space whatsoever and have to write in common areas wherever they live. Most single writers I know are broke and do not earn much money so this means they are almost always living with roommates, siblings, or family members. Even writers with significant others often have to shack up with them due to financial constraints. The writers who are married with kids do not always have the financial independence to have an on-site office, or be able to afford to rent a space, so that means they have to make due under the duress of the everyday insanity of raising children.

I'm lucky. I have a door to close, a comfortable chair (a necessity for someone with a bad back), and good music to listen to that helps me drown out the external noises of living in the Slums of Beverly Hills like noisy neighbors or nonstop leaf blowers, lawnmowers, and other whirling machines. I often enjoy writing super late at night because that when things are the most quiet and my brain has the least amount of distractions.

I write quickly, which means I often go for volume and quantity, mainly because it's just pure math -- if I crank out enough shit, some of it will eventually stick. I know other colleagues who take much longer to write, so it's an arduous and painful process. I'd prefer to rip the band-aid right off, because most of the time that's what you're doing as a writer... ripping off the band-aid, picking off the scab, and then squeezing out the blood and pus onto the pages. The faster I do this, the less it hurts.

I feel bad for friends that spend a significant amount of time crafting an excellence piece of writing (I'm talking days or even weeks), only to have it torn down in mere seconds by a nonsensical and nasty comment from the same fucking tool. It only take a couple of seconds for the troll to hijack the conversation and then it devolves into a shitshow. I know one friend who doesn't write very often and sometimes goes weeks or even months between posts, but as soon as he hits publish.... WHAM... troll shows up automatically because that decrepit creature was anxiously waiting and waiting and waiting for a whiff of attention, like a deranged lunatic stalker, until they climax at the moment they hit publish on their incendiary comment.

You cannot be an professional content generator on the intertubes without having a thick skin because there's always some sort of blowback. The world has no shortage of assholes but after a while, you become teflon and don't even notice. Unfortunately, I've seen extremely intelligent people crack under the pressure of trolldom. One of my colleagues lost her shit once and has yet to recover from troll-PTSD. I simply ignore trolls (they only gain power through attention). But whenever I see that happen to a friend of mine, it makes me go Hulk berserk and want to stomp them... but then in turn, I become a monster like them and a troll too. It's weird, I could care less about my encounters with morons, but I get more tilted and angry when I see my friends have to deal with them, or I should say, struggle to deal with them. I guess it's part of me feeling protective of my friends and the way I was raised to always stand up to bullies.

The internet has dehumanized people and the hive-mind and group think has taken over, which is why very few assholes have remorse or guilt, or really have no fucking clue what they are doing is wrong. In some ways, I've never seen so much over-sensitivity, then again, it's getting uglier and uglier every day as this psychopathic behavior is becoming normalized and socialized. We need to toughen up as a culture, but we also have to scale back a ton of this acidic vitriol that we unleash on anyone in our path who has a diverse opinion on the most mundane topics.

Back in the day, if you wanted to write a letter to the editor in the local newspaper, you had to include your address and telephone number and they'd call you up to verify that information and the content of your letter or citizen op-ed. These days, those same newspapers have embraced "web 2.0" (insert snicker here _____) and  they allow anonymous comments, which always gets completely out of hand. I admit, sometimes I often get caught up in reading some of those comment threads and cringe at the trainwrecks, yet I am unable to pull away. You can expect anonymous commentators to say the worst of the worst, but I'm shocked at what some people say using their own Facebook profiles and their real name.

It also makes me jealous of people who have an office job and get health benefits and get paid a weekly salary, on time, every week (or every other week) like clockwork. If they are having a bad day, then they can hide in their cubes, slack off, and dick around on Facebook and Twitter. All day. As a freelancer, if I don't work, then I don't get paid. That's what I signed up for. But on a bad day (mental health or even a bad back day), I have to suck it up and still gut through it all, which is why I'm really jealous of friends with 9-5 jobs who get paid to sit around and pick fights on Facebook (presumably with other office workers who are getting paid to waste their days away on social media) and troll celebrities on Twitter on company time. Seems like a ton of fun. I dunno why those folks bitch and moan about their jobs all the time. Shit, I'd love to get paid to grind Facebook/Twitter all day. Where can I get one of those jobs?

I had a friend tell me about how everyone in his office freaked out when their company firewall blocked Facebook. It seemed to work initially, but then everyone just dicked around and played Facebook games and updated via their smart phones and mobile devices. Addicts will find a way to get high. He made a joke in a meeting that any new hires should be specifically people who do not have a Facebook/Twitter profile, otherwise they should hire total Luddites. HR suits didn't laugh. They thought it was a great idea and it would increase worker productivity.

Okay, so maybe I'm happy after all that I work from home and don't have to worry about my overlords snooping around Facebook. For the meantime, it's back to calling up 1-800-Rent-A-Thug to help me get paid from delinquent clients.