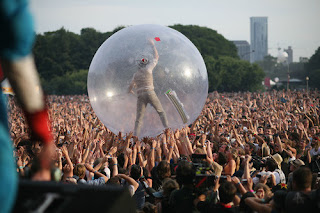 I watched two sets of Phish from upstate New York, then listened to a set of Widespread Panic from a ski resort in Alta, Wyoming, then capped off the evening listening to John Scofield's late night set at High Sierra music festival in Northern California. I did all of this without leaving my couch. Three bands. Three time zones. The future is here. Welcome to couch tour.

Couch tour brings live concerts to you. It's perfect for broke fans (teenagers, college kids, recently divorced dudes who's ex-wife had a much better lawyer) or older fans with responsibilities (jobs/kids) or shut-ins/social misfits. This new facet of our culture allows music enthusiasts to listen/watch streams of their favorite bands and music festivals. Not taped shit. Live. As close to the real life experience without being there. Live performance without a net zapped right into your living room.

Now you don't have to camp out with 60,000 sweaty souls and get eaten by bugs in the middle of fucking Tennessee to catch Bonnaroo.

Now you don't have to wade through a sea of tight, skinny jean wearing malcontents at Coachella.

Now you don't have to worry about a burnout acid casualty dance uncontrollably in front of you at a Panic show.

In the last two weeks, I listened to more Widespread Panic than I did in the last two years. Maybe that's pushing it, but it's definitely close. Panic is a band one of my dorm mates (Wilkins) introduced me to during the first week of school. Twenty years later, I stumbled upon a site called PanicStream.com. My friends who are Spreadheads were well aware of Panic Stream, a site that provided free ad crisp audio streams of Widespread Panic concerts. In the last two weeks, I listened to four shows at Red Rocks (three free streams and one paid webcast) in Colorado and parts of four shows at a random festival in the mountains of Wyoming. Real time, too. Pretty rad concept. The band usually came on right after I was done with work for the day and ready to unwind with some baseball. Panic was the perfect soundtrack to the Yanks.

Friends from Colorado went to the Red Rocks shows, so I was listening along with them while I followed whatever they posted on social media. Widespread Panic webcast one of the shows, but they charged $25. I got all of this free music through Panic Stream (which is not affiliated with the band, but they somehow get patched into the soundboard and deliver high-quality audio), so I felt compelled to buy the webcast. Plus, I knew I wouldn't be able to see any shows this tour (they're not coming through California and several friends tried to get me to see them in Las Vegas... the farthest west that this tour takes them... but I couldn't pull the trigger one week before I'm supposed to hop onto Phish tour) so I figured $25 was a worthy investment for a webcast. Tickets were around $50. Nicky and I got three hours of music for $12.50 each, or the price of a movie ticket at The Grove. If I caught Panic in person, it would run me and Nicky $100 minimum to see the show, not including travel expenses and miscellaneous costs (hey, weed is legal in Colorado now!). Oh, and then there's the elements to brave for an outdoor show like rain or sweating your balls off, and if you're stuck at the top of Red Rocks, the sound gets muddy on a windy night.

The best part about watching a concert from home is not having to deal with all the drunks and wastoids. I'm all about letting loose and having a good time, but I see too many people who cannot control their buzz. Sure, you're never going to fade your fair share of kids getting complete shitfaced and blotto out of their minds -- been there and done that -- but the saddest cases are guys/gals my age and older who are trying to relive their old glory days and party like their 22 years old. They get out to a fiery start but then they crash hard and its a total shitshow. At home, I'm the most fucked up person in the room, so if there's going to be a shitfaced moron talking throughout the show, then it's gonna be me.

Nothing can beat the visceral experience of a really good concert, but I only see a small fraction of music today that I used to see a decade ago. Weird that I can afford to see more stuff than in my 20s, but I don't, mostly because I don't like seeing shows in L.A. where the crowd sucks and filled with hipsters posting selfies on Instagram and checking in on Facebook and talking their asses off after doing key bumps in the grimy bathroom.

It's 2013 or fifty years after the Beatles hit the airwaves. Baby boomers only had the radio as an outlet for music. Big concerts were few and far between in the mid-60s. You had tiny clubs and the occasional hall. It wasn't until the man saw how much money the record companies and radio stations were making off of the creativity of musicians by bilking teenagers, willing to spend money on records as a form of entertainment and/or means to look cool. Eventually, promoters wanted a cut of the juicy pie and they staged huge rock-n-roll concerts and music festivals. Concert promotion was a booming business in the late 60s and early 70s, and it still is 40-50 years later. The recording industry is on life support and terrestrial radio is lying in a hospice, but if you're a band or musician who has a good live act down, then you'll always be able to grind out a living.

Technology brings live concerts to you. Beamed into your living room, or onto your laptop, or ipad or mobile phone.

It's mind-blowing in one way. Bands/festivals embracing cutting edge technology are giving back to the fans without being exploited by the man.

If you happen to have problems with large crowds then you can still enjoy the live concert experience without falling victim to your phobias. Heck, I love going to concerts, but sometimes those massive crowds can be a bit overwhelming. That's why the home experience is a compelling alternative. The older I get, webcasts become a more enticing alternative. Why go to Coachella and the middle of the fucking desert when I'd rather stay at home and pull bong hits and not have to deal with annoying hipsters and other pretentious music dweebs?

But for now, I have the best of both worlds... I still enjoy seeing live music, but also take advantage of as much "couch tour" moments. In the past few months, we caught webcasts of music festivals like Jazz Fest, Coachella, the Hangout, Bonnaroo, and Mountain Jam. I even listened to an audio streams of the High Sierra festival the other night. Without even leaving my couch. A lazy stoner's utopia.

Phish doesn't have an unofficial audio stream. Any time we get one, it's a total bootleg and someone who is broadcasting from inside the show. Once in a while you get a very clear stream, but most of the time it's choppy. It's like being a heroin addict and getting a fix by eating a jar of Flintstones chewable vitamins.

Over the weekend, Phish webcast all three of their shows from Saratoga Spring, NY. I really wanted to go, but had an unfinished work project and I was saving my money for a fall tour. They offered up a webcast of all three shows for only $40 (or $15 each). Nothing can top being at a live Phish show, but $40 was a small price to pay for a crystal clear webcast (HD video compared to choppy audio from guerrilla tapers). The band is not getting any younger. I hope they can work out a deal and webcast every show, or at least figure out an audio broadcast. It'd be cool if it was free like PanicStream, but I dig Phish so much that I'd subscribe for a subscription service that gives every webcasts. I'd even pay twice as much as I do for MLB.tv or NBA Season Pass. I heard the band is working on something... but who knows what they'll end up with.

In the meantime, I continue to chill out and wait for someone (or the Twitterverse) to remind me there's a good show being broadcast somewhere. Unless you're raging proper at a concert, then any night is a good night for couch tour.
by Pauly at 7/08/2013 04:20:00 PM