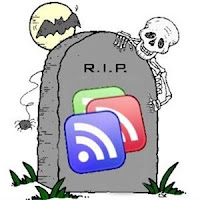 Blogs are a thing of the past. Like dinosaurs, Charlie Sheen's "winning", and Tae Bo.

Even Google is leaving them in the dust. Google Reader ceased operations at the end of June. I was not an early adopter. I was a huge fan of Bloglines, until that site got put out of business (by Google Reader, I believe).

I took me a while to embrace Google Reader, but when I did finally join the cult... I fucking loved it. I traveled a ton and didn't want to miss out on specific content. Google Reader was the best and quickest platform for me to catch up on the world via news and blogs... but more importantly, it allowed me to keep tabs on the poker industry, which I needed to do as a reporter and a wanna-be insider.

My reading habits fell into different cycles. Sometimes I read it constantly, or barely touched it at all. When I was on top of things and able to stay connected... I rarely stopped by Google Reader because I was already informed. But whenever I traveled or had a three or four-day bender, I needed to catch up as quickly as possible, so Google Reader was always reliable. A perfect index.

I always felt like whatever content I published )on different blogs) wasn't official until Google Reader's spiders picked it up. I probably caught more random errors in Google Reader than when I actually wrote the original post.

My hobby became a career and I needed a new hobby. Google Readers helped me cultivate my career and it allowed me to keep tabs on inspiring things and some of my favorite activities.

I frequented the poker forums less and less (unless I had to do something for work... yes, it was all work, no pleasure to sift through the static). Instead of adding more poker titles, I found myself following financial blogs, news sites and reading more economic forums. After a while I stopped playing online poker (the government outlawed it and forced my hand) and dabbled in trading silver futures. I got a gambling fix and supplemented my income. That was stressful, but fun in many ways. Hey, you didn't think I could live off of being a writer? Hell no! I was a veteran reporter and at the top of my game, but I got paid peanuts. I had to play poker, or gamble on sports, or trade silver on the side to supplement my income.

Trading silver was too stressful (ask Nicky... that was the only time in our relationship when I drank frequently) but that was around the same time I started paying more attention to different financial conspiracy sites (like Zero Hedge) and listened to Peter Schiff podcasts and religiously watched the Max Keiser Report. Those were gateway drug to general conspiracy sites. A new category popped up in my Google Reader.... conspiracy fodder and UFO forums. I was researching a potential screenplay, but it was also fascinating to see so many people completely detached from reality, yet what if one or two of them were actually right? Talk about a mind fuck. I also got involved in Occupy when I lived in San Francisco, but after I attended one March and spotted the FBI and other law enforcement agencies taking everyone's photos, I got a little freaked out. The last thing I needed was being added to a watch list or a drone hit list! I slowly stepped away from the conspiracy forum-tards and found a new hobby.

Last year, I jumped head-first into Tumblr and found a bunch of cool sites. Mostly images and different art. It's weird. I spent a lot of time looking at photos and paintings.... through Google Reader. It was like a trip to the museum... but from the confines of my own home. On the flip side... I also loaded up on sports stuff and sportsbetting sites. The last two years have been a battle between sports (and poker) vs music (and art). Sports edged out the arts... slightly. But, I'm adding more and more music blogs/websites/tumblrs over the last six months.

I forgot that I had a Netvibes account. They bought out Bloglines and I had some old feeds still running. It's not as cool as the OG bloglines. I took a peak at "OLD Reader" but it had some flaws. Looks like I'm using Feedly... for now.