Jump Into the Fire and Drinking Cognac With Harry Nilsson 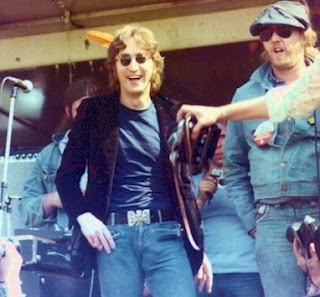 Almost every John Lennon/Harry Nilsson story I heard involves the two getting shitfaced drunk and pissing people off with their hijinks. They were drinking buddies in the post-breakup Beatles era. When Lennon had problems with Yoko, he fled to L.A. to party it up with Nilsson, who was notorious for multi-day destructive benders filled with mayhem. Sounds like my kind of guy.

Nilsson had an unique, angelic voice and wrote many profound, fluffy songs. Yet that was just on the surface of a dark streak that fueled those benders with Lennon, Ringo, and other musicians who blew through Hollywood in the early 1970s.

I heard plenty of Nilsson songs on the "oldies" radio station my mom had on in the background. This was in the late 70s and early 80s before TV expanded beyond four channels and nothing was on during the day except soap operas. The radio was always on in our living room until prime time when I got kicked off the Atari and the TV switched on. I absorbed dozens of Nilsson songs without realizing it.

In college I saw Goodfellas for the first time. Everything about it was kick ass, including the soundtrack. Scorsese had a knack for selecting the best possible song to play over a scene. I can't help by visualize parts of the film without hearing the accompanying music, like the bridge from Layla during the scene when they find all the dead bodies scattered over the city, or Gimme Shelter playing over the scene with Henry Hill cutting up kilos of cocaine with his mistress.

One of my favorites scenes from Goodfellas the helicopter scene near the end of the film. It's the beginning to the "last day in the life of a wiseguy." Harry Nilsson's Jump Into The Fire kicks off the scene with Henry Hill gacked out of his mind and running around Brooklyn-Queens trying to squeeze in family stuff while doing gangster shit. Hill is paranoid that the federales are following him around in a helicopter.

I found the scene on YouTube, but it's dubbed in French...


Anyway, the soundtrack from Goodfellas was the first time I was really sucked into a Harry Nilsson song. I mean, really sucked in. Like obsessed. It took a while before I found a friend in Seattle with one of his albums -- Nilsson Schmilsson. The album cover is a hungover Nilsson (who looks like your pot dealer from your dorm) wearing a robe while standing in his kitchen. I was so overjoyed I found it. This isn't like today when you can type a song name or album into YouTube and hear a sample (if not the whole fucking thing). It took a half a decade before I found the song from the helicopter scene. For years I was like some demented archeologist on an impossible quest for Incan gold monkey masks. I finally found Jump Into the Fire and was blessed with an extended version that included a maniacal drum solo (starting around 4 minutes). I was hooked the moment I saw the film and still hooked today. The intro still shivers my spine today.

Shit, this should have been today's Monday Morning Key Bump over at Coventry Music. Here's the 7 minute version that I cranked up a few times this weekend, which I know pissed off the neighbors...


Last week while watching Shut Up and Play the Hits documentary, I was stoked to hear James Murphy cover Jump Into the Fire at LCD Soundsystem's last show. He invited Arcade Fire onstage and they tore it up. Murphy put his own vocal spin on an homage to Nilsson.

This is not the best audio, but here's a taste (starts about 1 minute in)...