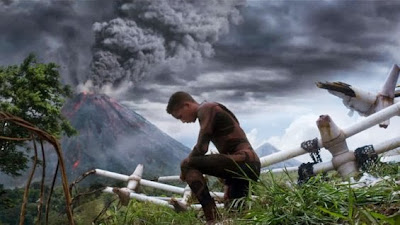 I saw another bad movie.

Holy shit. It was bad. Like so bad I smoked a ton of hash just so I could keep watching it. I'm glad I didn't pay money to see it in the theatres because I hate giving over hard-earned money to Hollywood shitbags like Will Smith aka the Fresh Prince, who leverage his fame to make a shitty vanity film that is thinly-veiled recruiting film for Scientology.

I'm glad I didn't waste my money and see it at The Grove because I would have walked out to go to Nicky's car and smoke hash, then try to get back into the theatre, but I probably would have said, "Fuck that. This flick blows camel cock. I'm gonna hit up the farmer's market and knock back a chocolate shake at Bennet's instead."

I only saw After Earth because... A) I actually like bad movies, and 2) critics destroyed After Earth in reviews due to the heavy Scientology backlash, and for the fact it just sucked.

If your film has a bad story, it's not going to float. You know why? Because shit don't float. It's all about story. If it's a good story, people will invest ninety minutes of their time to listen to it. But if it's drenched in Scientology crapola, then you know it's going suck. Yeah, the Fresh Prince of Bel Air is one of those wacky celebrities who is deeply immersed in the religion cum cult otherwise known as Scientology. The Fresh Prince dragged his entire royal family in too. Supposedly After Earth is soaked in Scientology lore. I guess that's why I saw it. I'm naturally curious about why Hollywood freaks like Will Smith and Tom Cruise are so obsessed about a dopey religion made my a failed screenwriter and fifth-rate sci-fi writer who just wanted to have power over women, get laid a ton, and find suckers to give him money.

There's no shortage of lost souls out there. That's why shysters and hustler rake in tons of dough taking advantage of those lost causes. I lived in Las Vegas long enough to know that churches and casinos weren't built by happy souls. L. Ron Hubbard found a good racket and bilked millions out of easily manipulated lost souls. The more you're lost, the more you're willing to fork over cash to someone who makes you feel better, or at least someone who you think is showing you a shortcut to eternal happiness.

I already filled quota of Scientology films for the decade after I saw The Master in theatres. I was so pumped about the PTA flick that I saw The Master during its opening weekend. I watched it thrice more since then and still have no clue what's going on. I eventually wised up to all of the water symbolism, but it's still a peculiar friggin' film.

After Earth? I have the same gripes as everyone else. I expected tons of bad acting, and they delivered in that department. The only character I watched to bitch slap more was Hayden Christensen's Anakin Skywalker.

Yes, After Earth sank because it had many plot holes. Too many poorly constructed allegories between man's fears and mental slavery. And the big hairy monster was not scary enough. In this CGI-heavy era you'd figure those special effects geeks crate something a little more ferocious than an eyeless alien that spits out thorns.

Will Smith generated a trillion dollars world wide for the fat cats in Tinsel Town. The suits finally threw him a bone and let him have a vanity project and cast his son in the lead roll. Guess what? Will Smith made another bad movie and cashed a monster paycheck. He's going to sleep on a huge pile of money. Me? I sweat a lot when I sleep and have strange dreams, mostly about getting lost to a meeting when I'm trying to sell a screenplay about post-apocalyptic Earth.

At least Bagger Vance was watchable because of all the cool photography and framing of golf shots. Even director M. Night Shyamalan couldn't save this film. Maybe if he put one of those "I see dead people" twists, it could have been more watchable. Instead After Earth was riddled with bad cliches and the Fresh Prince spoke with a bad accident and tried to perform self-surgery in a weak scene compared to the insanity and gore of the self-abortion scene from Prometheus.

The lamest scene from After Earth? When Fresh Prince wouldn't take space-age painkillers because it had a warning label: it caused drowsiness and impaired vision. He needed all his mental facilities in order to successfully guide his son on a life-or-death mission, yet he passed out a couple of times anyway and then his kid lost communications. Shit, if anything the Fresh Prince wasted a good opportunity to shoot up some kick-ass deep space synthetic morphine.