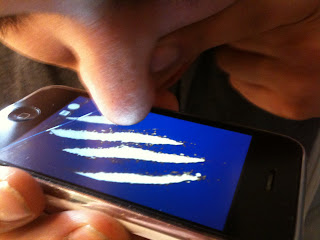 The future is now. This is the first post created through an iPhone app.

I finally gave in and joined the cult.

I'm a former Apple cult member. As a kid, I was a staunch Commodore 64 guy but by the time I graduated high school, those antiquated computers got smoked by Apple's new invention -- the Macintosh.

After college ended, I purchased an Apple desktop computer because I found a great deal through a friend of mine. That was when I was living in Brooklyn and worked at the museum. I worked a bunch of overtime for two months to save up for my a computer and dial-up modem. When I relocated to Seattle, I brought that fucker across the country with me. I almost bought a Mac laptop when I was out West, but I used the money to go on Phish '98 summer tour instead. When I moved back to NYC in 1999, I tossed the Apple in the car and headed home.

Shortly after 9/11 I decided it was time to embrace the laptop trend. My grandmother gave me some money for my birthday so I pocketed the cash and bought a Macbook with whatever space I had left on my credit card. It was an amazing purchase. Sort of like having an attachment to your first "new" car. then again, I've wrecked three cars in my life so that's probably a bad analogy.

Some of my best writing occurred on the original Macbook when I was living in a studio up in North Riverdale in 2002-03. That's where I penned my first screenplay ("Charlie's Goldfish") and second screenplay ("Sweet Nothing"). Not to mention where I finished my first novel -- Jack Tripper Stole My Dog (for 2002 NaNoWriMo). Over the next couple of years, I cranked out four more manuscripts on that machine.

I had a very strong attachment to the Macbook and vice versa, but when I moved to Vegas for a job in the summer of 2005, I made a wise choice and left the Macbook behind with my brother in NYC. I had purchased a cheap Dell laptop from online poker winnings and brought that with me to Vegas. I figured if it got lost or stole (when I was living at the Redneck Riviera), then I wouldn't lose much of my stuff like manuscripts, Dead bootlegs, and a ton of music.

I never picked up the Macbook. It's permanently in NYC, so I'll always have a laptop there whenever I visit. By now it's over a decade old. I had four Dell's and a Toshiba (work laptop) since then. I traveled so much and beat my laptops into the ground that I burn through one every 18-20 months. These fuckers really take a beating, but I like having multiple laptops. The travel laptop is stripped down to bare essentials so I won't lose anything important if some sort of shenanigans occur.

I actually bought a Macbook a couple of years ago for Nicky. It was a thank you gift to her after Lost Vegas was published. She put up with a ton of shit during the five years it took me to write that fucker. I got all the glory, but she had nothing to show for her dedication and unwavering support... until I got her a Macbook Pro.

I acquired a Black Berry many moons ago as my first smart phone. I wanted a BB for sole purpose of having a keyboard so I could answer/write emails. I have several accounts and many of my clients/colleagues were European or Australian, so it made sense that we were on the same network because when the initial iPhone was released, Apple was still lagging in overseas mobile markets. They have quickly caught up and the iPhone 5c is Apple's attempt to attract new customers in the BRIC countries (Brazil, Russia, India, and China). At the time I got my first BlackBerry, I had the ability to use BBM (Black Berry Messenger), which is like an IM service that sends text messages through BB's network so I would not incur extra costs when sending texts to the UK, France, Australia, or Costa Rica. Super practical... at the time.

When I was living in San Francisco, my BlackBerry got soaked after a freakish accident when I dropped it in the sink. Alas, due to my butterfingers, I was forced to buy a new phone. I could have gotten a iPhone 4s, which had just came out and was all the rage because it had "Siri", or I could have gotten another BlackBerry model for next to nothing. I went for the cheapo option and continued to stay on the BB network. That was almost two years ago. In that short span, BlackBerry went deep into the shitter. They're on the cusp of going bankrupt. One day you're at the top of your industry and the next... you're a dinosaur. With Blackberry's future looking grim, I jumped on the iPhone bandwagon.

Nicky was kind enough to buy me a new iPhone for my birthday. A truly generous offer. I probably would have opted for a non-iPhone. My BlackBerry contract was up at the end of November, so I was eying different devices. I was on the fence about an iPhone. Tons of pros, but tons of cons. But since my lovely girlfriend wanted to give me something practical for my b-day, it was impossible to say no.

And I downloaded a few apps. Like Blogger and Tumblr. Makes posting 100000% easier than what I was doing on BlackBerry.

The big downside... email reconciliation. Some of my non-gmail accounts are wonky. Plus, I get so much damn email that it's a pain in the ass to answer it on my phone if I want to write something more than a couple of sentences. The entire point of the BlackBerry was answering emails on the fly, but the iPhone is limiting in that capacity.

Give and take. It's a give and take world especially when dealing with ever-shifting technology. Hopefully the creative things I can do with the new device will outweigh any negatives.

By the way... I started this post through the app, but I got sick of typing on the phone so I saved the post after the third or fourth sentence and then finished it off on my laptop. Unless I have a short blog post planned, I doubt I will be posting shit through the app. Too tough to type on a laptop when my mind moves faster than my fingers can move. It's even more problematic on an iPhone.