I referenced testicles twice in the same week by using the word BALLS in two blog posts. It's not that I have a testicle fetish. Rather it's been cold in this neck of the woods. So fucking cold that I'm surprised one of my testicles didn't freeze up and die.

Polar Vortex of 2014 destroyed many a man's balls. It made 13% of the population uni-balls.

This is why I live in Los Angeles... 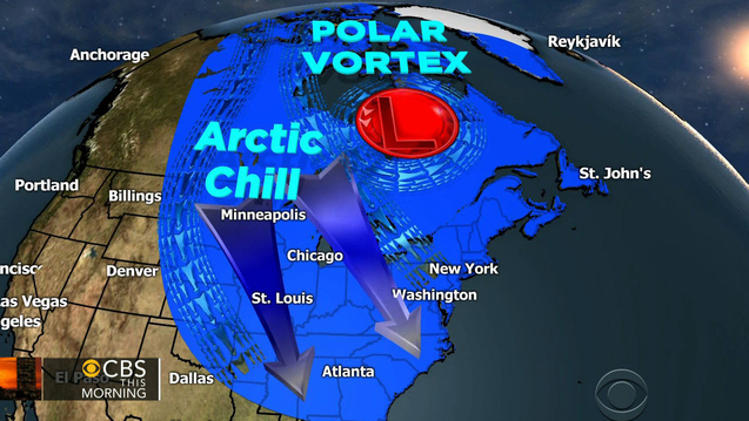 Notice how far away the City of Angeles is from the so-called epicenter of the POLAR VORTEX? I finally have a legit reason why I'm in SoCal... to avoid the polar vortexes.

Polar vortex? Is that even real? Sounds like a MSM buzz phrase ripped from the pages of a Philip K. Dick sci-fi short.

Whenever I hear vortex, I think of an open portal to the nether world. Maybe my Colorado friends smoked too much DMT over the break and opened up a wormhole to the ice planet HOTH. At this juncture, if multiple vortexes return, we're gonna need tauntaun's to ride around on. Have you tried to walk on seven blocks of sheer ice? Not fun. It strains the calves, and I don't have ice skates any more. We need alien llamas to navigate the streets. I heard tauntaun jerky tastes just like moose.

Polar vortex was the quick burst of cold weather that turned Chicago into New Siberia and crippled a shitty airline named JetBlue, which in turn stranded my ass and left me to fend for myself in the middle of the polar vortex. What bastards! All I wanted to do was go back to sunny and warm SoCal and wear shorts and t-shirts and sit in my office and lament over the illegals trimming the hedges across the alley.

I lost my hardened shell after I bailed NYC. I got soft from living in Southern California for so many years. I left NYC in 2005 to move to Las Vegas and eventually settled in SoCal a couple years later. The past three plus weeks is probably the longest winter stint I had in NYC since winter of 2004-05.

The human body completely changes over ever seven years. Yes, you're a different person every seven years because all of your cells regenerate over that period. In the last regen phase, I have been transformed into a warm weather person.

Sure, that (frigid) stint in San Francisco was a sobering affair. Cold as fuck in the summer. Sure, it's cold in the winter but the summer cold is a mind fuck because it's sunny one second and then BAM! You're nuts are freezing.

San Francisco probably one of the coldest cities I lived in outside of NYC. I've been lucky because I migrated to cities in warm climates most of my life: Atlanta, New Orleans, Austin, Seattle, Vegas, and LA. Guess what? Never saw a polar vortex in any of those places.

It's cold. Ass cold. So cold that I limited my time outside... but only during sunlight. You cannot go out after dark in the polar vortex, or it will swallow you whole. I wandered around for a little bit and ran errands because I figured everyone else would stay inside and the stores/streets would be empty. I sat at the counter at the diner because it was empty (save for a couple of old-old-old Jewsih ladies botching about the weather). No one was around. Freaky. I don't think I ever walked right up to the front of the line at a local chain drugstore. And the post office? Zero line.

Streets in this tony Bronx neighborhood were empty. Wind howled malevolently like a wounded spirit animal. It felt like I was in some weird post-Apocalypse film, or some sort of bizarre reality show from Norway or Finland, or some other wretchedly and depressing cold place.