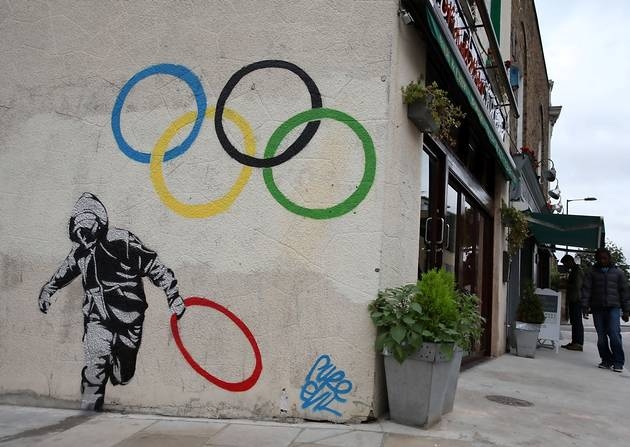 I grew up during the Cold War. The Russians were the enemy. Those commie bastards were going to nuke the big cities, cut the Alaskan pipeline, and march into the heartland of America.

I grew up in NYC, so I had some solace knowing that we'd be instantly fried and wouldn't have to hole up in the mountains like a Red Dawn scenario and fight the invading Ruskies using guerrilla warfare tactics.

My father was an ex-marine who was stationed in Germany in the late 50s. He was a good shot and studied German in high school. So Uncle Sam shipped him out to Germany and the pseudo-front lines of WWIII, as he used to say.

I had just begun college and was away from home for a month when the Berlin Wall came tumbling down. This was pre-internet. I didn't get an email address yet. I wouldn't get my first cellphone for another ten years. We watched CNN (benefts of  going to college in Atlanta) on a TV in the lounge of my dorm. That was the first images of the end of Iron Curtain and the fall of Soviet Empire.

But then shit got crazy in Russia in the ensuing years. What happens with power in a vacuum? It gets swooped up by organized gangs -- Military/Intelligence Apparatus, Big Banks, Corporations, and the Russian mafia. America won the Cold War without firing a shot. Our banks and corporations found a new market, and in turn Russia was introduced to capitalism and corruption.

During the Cold War, Russian citizens were kept in line by fear, violence, and the threat of banishment to Siberia from "The Party" and KGB. The previous system of order was insane but it was nothing compared to the new tidal wave of graft and corruption. Toss in an unexpected oil boom and you have an interesting mix of new-found wealth coupled with widespread corruption in every facet of Russian society.

No wonder the Sochi Olympics cost $51 billion compared to $11 billion (Vancouver 2010). Sure, Putin and company had build out a sleepy resort into an international sporting hub, but that should not have cost more than $20 billion. So what happened to the other $30 plus billion? Stolen, of course.

Based on the some of the images I saw via social media, shit was poorly thrown together and not everything was ready. Some of that was legit. I know journalists who covered previous Olympics and nothing ever went off without its own set of problems, but you knew something was rotten in Denmark when there was more people following @SochiProblems on Twitter than the actual Sochi official feed.

America is a nation run astray by hustlers, unscrupulous con men, and faith healers. We're more slick about the corruption (or putting up a good ruse), yet the common citizen is in complete denial about living in a rigged system. Ignorance is bliss.

The two things that struck me the most about traveling to Eastern Europe or South America was... 1) the startling and drastic gap between the elites (uber rich) and the poor, and 2) the blatant corruption on the most basic levels.

After a while, I got used to it and was impressed with everything being out in the open. Bribe a judge. Pay off a cop. Get some low-level service mook to steal some shit for you. If you have cash, no problem.

Sure, I was used to paying the Gringo tax wherever I went in South and Central America, but there was no effort it putting up a sham, or put on. At least the corrupt officials and companies in America try to shine you on, which I can't tell if that's a good thing, or a bad thing.

Like Hollywood has completely brainwashed us with a trope of David vs. Goliath films. It's not just rom-com teen comedies in which the geek beats the jock and sweeps the hot girl nextdoor off her feet. It's not just Rudy or Miracle On Ice type of sports films when the underdog overcomes insurmountable odds to defeat an unbeatable powerhouse. They've also got us thinking that the little guy can beat a multi-national corporation, like that Erin Brockovich movie, or those 60 Minutes stories about someone who got screwed by the Man, but never gave up and overcame a mega-corporation.

Hollywood sells us a dream. It allows us to escape from reality. Because in the real world, the girls you desire the most always ignore you choose the bad guys. The Cinderella teams rarely win. And the Man always fuck over the little guy.

The coverage of the Olympics is laughable. The suits created a clone of Bob Costas and shipped him out to Sochi. That's why his eye is all fucked up. His clone is malfunctioning.

Sure, there's a time zone issue, but in today's age with internet live stream capabilities and multiple NBC channels its silly to hold back on coverage until prime time... just to make an advertising buck. A what a buck it is. Sheesh. Everyone is getting rich, or shaping political favor... except the athletes. Amateur sports is the biggest fucking sham in the world. But it's all for nationalistic pride, right?

In the end, if you're a lazy media consumer, or someone who is not hyper-active consuming nonstop media via the internet, than all you get to see is what NBC wants you to see. It's not like we get unfettered access to every event like you can in other countries. Watching results unfold on Twitter and not being able to watch it is sort of like being in prison or something.

The lack of timely updates, the watered-down coverage, and overwhelming coverage of #SochiProblems seems more like dystopian propaganda than a sporting event. It almost makes me feel like I'm living in the dreadful Soviet Union that I was taught to hate as a kid during the Cold War. The commies were evil because they controlled the media and how stories were presented.

Should I believe everything Bob Costas' clone is telling me? If so... then Russia is still a James Bond-like criminal, meanwhileAmerica is awesome. We have apple pie, snowboarders, purple mountains, California girls, and freedom of the press. Ignorance is bliss.
by Pauly at 2/08/2014 04:20:00 PM