When Shane approached me with a concept that became  Dope Stories podcast, he specifically mentioned a book by Dr. Carl Hart titled High Price. The book was a hybrid memoir/science book that dispelled many myths about drugs, especially the propaganda surrounding crack cocaine. Dr. Carl Hart is a professor of neuroscience and psychiatry at Columbia University (in fact, he's the first black tenured professor in the sciences. Ever.) and he conducted experiments that debunked a lot of disinformation spread by MSM over the last three decades.

Super cool that someone of Dr. Hart's pedigree (Ivy League prof) agreed to stop by the Dope Stories studios (aka my apartment) and sit in our recording studio (aka my office) for ninety minutes to talk about drugs, drug myths, and discuss Shane's infamous/controversial article in Slate about crack use. It was that exact article that "touched" Dr. Hart's heart and he felt compelled to meet with Shane in person and take time out of his busy schedule and be interviewed by us.

Dr. Hart is no stranger to the talk show circuit. He's appeared on numerous TV shows and even went heads-to-head with Bill O'Reilly. Dr. Hart was even scheduled to appear on Joe Rogan's show on Monday, which is so damn cool that he made time for Dope Stories, which is still relatively new compared to established programs like the JRE.


There's a great story about how a persistent Shane snagged Dr. Hart for an interview. We knew he was going to be in town for a few days, but didn't know how busy he was going to be. Sure, we could have conducted a Skype interview, but Shane really wanted to meet the man who helped inspire this podcast.

We spent a few hours with Dr. Hart and it was definitely one of the coolest experiences I ever had. Seriously. Ivy League professor hanging out in my office to shoot the breeze. Most college professors can be a little snooty, or stuck-up, and they love hearing their own voices... but Dr. Hart was gracious and humble and didn't jump down our necks when we were completely wrong about a few things (behind the rampant brainwashing and propaganda from the Nancy Reagan Just Say No era). He really wanted to engage in a conversation instead of give us a lecture. I wished more professors were like Dr. Hart... I might have spent more time actually going to class.

I hope we can get Dr. Hart on the show every few months (via Skype) to discuss different aspects about drug myths, drug policy and race, and the drug war. After all, he's one of the inspirations behind this podcast. His book opened my eyes to so many myths. His spots on different media programs were enlightening (just do a search on YouTube for "Dr. Carl Hart"). But most importantly, he instilled some much-needed confidence in Shane, who has been struggling with shame and embarrassment surrounding his affinity for freebase cocaine.

Anyway, here's the "setlist" for Dr. Hart's interview. It really doesn't do it justice because we spoke about over a dozen topics. But the one thing that startled me was his honest assessment of The Wire. It's one of my favorite shows... but he wanted to make emphasize that it's still fiction and not an accurate portrayal of the black experience. Dr. Hart critiqued that The Wire was enjoyable, but it still fits into the mold of white people telling the story about the lives of black people. 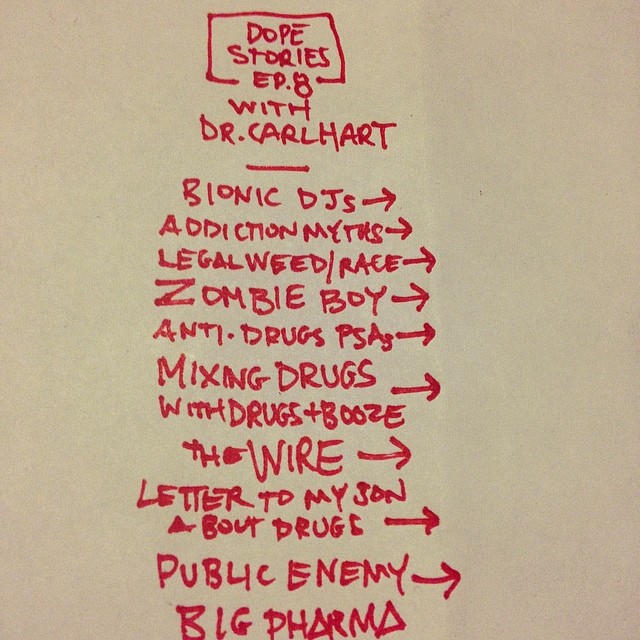