It's that time of year again. March Madness. The NCAA college basketball tournament. 68 teams vying for the championship. It's really a billion dollar money grab for corporations while amateur (unpaid) athletes give up their blood, sweat, and tears for the love of the game. It's really one of the best spectacles on Earth, and the opening days... first four... are among my favorite days of the year.

By the way, that Billion Dollar bracket? Bullshit. The real odds are like a Trillion to one, so Warren Buffet is fucking you! Doesn't matter. No one is going to come close unless they submitted a couple of million different combinations and even then it will still be a mega-longshot. So yeah, I didn't bother submitting one to Buffet. Fuck that fucker in the fucking big head.

Anyway, back to March Madness. This is the one time of year I go berserk for basketball. It used to be the only chance I had to generate income for my summer travels. Historically, I planned my summers around how much money I won during March Madness. If I had a sick score, then I could visit some place really cool or see spend a significant amount of time on the road following Phish. If I had a shitty March Madness betting wise, then I'd have a rather mundane summer with no travel plans. Luckily, that only happened once or twice in the last 20 years. I always managed to squeeze out some profit betting on college basketball.

Sometimes I wonder if I became a writer just to guarantee I have time off to watch the opening round games. Seriously. 32 games spread out over 2 days. There's 16 games on Thursday and 16 more on Friday starting at noon ET. With the exception of a work trip to Uruguay a couple years ago, I have not missed the opening round in over a decade. I usually traveled to Las Vegas with my brother and/or Senor for the second round of action because it's not as crazy. But the first week of March Madness is like Christmas, New Years, and a dozen birthdays all rolled up into one.

The best part about living on the West Coast is watching games at 9am local time. It's 2014, so there's technology around to watch every single game. There's never more than four on at once and the NCAA cut a deal with four networks to air every single game. The games used to be only on CBS, but now TBS, TNT, and TruTV carry spillover games.

So how do you triage these simultaneous games? I devised a plan to figure out how to watch every play without missing anything. I use the main TV, a secondary TV (that is usually in our bedroom, ye moved into position next to the main TV), and an iPad. That's it. Pretty simple. 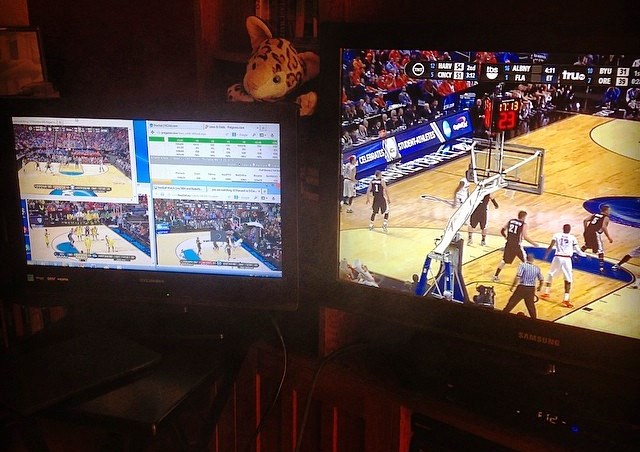 I log into my cable company's app and watch one game that way. Then I utilize my laptop to visit the NCAA website and stream two games from that and HDMI those feeds to the secondary TV, while the main TV has on the "primary game."

So what constitutes a primary game? Here's the rules I set up to help me triage how to watch four games at once...


1. Game with least amount of time on clock. This is simple. If a game has 2:00 left and another has 12:00 left, I automatically watch the end of the first game. Now, the ends of games can become elongated affairs in which 30 seconds of "clock time" is really 17 minutes of Earth time due to commercials, free throws, and other interruptions. That's why having games on other devices is great because I can watch those screens until action is ready to roll on the big TV.

2. Game with the biggest bet. Another simple rule. If I got a bet on it, I'm gonna sweat the fucker. The only exception is if the game is early in the first half or if there's another game near its completion, so that means rule #1 takes precedent.

3. Game with the second biggest bet. Pretty simple. Anytime I have money on a game, regardless if it's a small bet or big bet, then I'm gonna keep close tabs on it.

4. Potential upset. I love these games. That's the beauty of March Madness... the Cinderella stories. I love a good upset, especially on the first day of action. Anytime I see a #15 or #16 seed with the lead, or keeping it close, I'm gonna wanna watch that drama unfolded.

I rely on my phone to sweat Twitter, monitor @OcelotSports (and Buffalo66's last minute betting additions) and field text messages. It seemed like I was getting pinged every 10 seconds from some other degen. Having a secondary laptop (usually Nicky's laptop) is key when keeping tabs on line moves, because the primary laptop is running the live streams.

The first 16 games? Totally draining. By the time the day ended around Midnight PT, I had been up for 16 hours grinding line moves, online sportsbooks, Twitter, etc. You never realize how draining it is until you finally turn everything off and collapse into bed.
by Pauly at 3/21/2014 04:20:00 AM