Lucky 13. This is the special 4/20 Day episode that we had recorded on 4/20. We live-streamed the show for our friends but that was more like a rough draft of this episode. Here's the actual edited episode with the audio cleaned up by our kick-ass producer DJ Trent.

So the 4/20 Show? Lots of smoking-infused hijinks. We sampled pre-rolled joints (glimpse into the future of corporate weed cigarettes), took dabs of Brown Sugar, and set off the smoke detector in the process. Shane and I had brief chat about the Gimme Shelter documentary about the Rolling Stones at Altamont, and why Benjo referred to it as a "snuff film." Shane also shared a funny story about losing an ounce of weed and shrooming on Easter at  Roseland Ballroom. I also explained what Easter really is (zombie Jesus) to Shane because he's Jewish. Yeah, lots of religious humor in honor of Easter.

In the Dope Media segment, we selected... Dave Chappelle/Neal Brennan, Don't Look Back (Bob Dylan documentary by D.A. Pennebaker), Seven Ages of Rock documentary (which G-Money recommended to me earlier in the week), and What You Want Is in the Limo: On the Road with Led Zeppelin, Alice Cooper, and the Who in 1973, the Year the Sixties Died and the Modern Rock Star Was Born by Michael Walker. 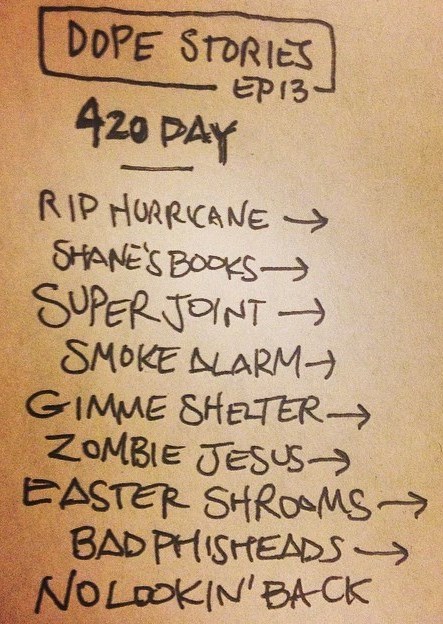 Email ThisBlogThis!Share to TwitterShare to FacebookShare to Pinterest
Tags Dope Stories, Inside Dope Stories, On the Road, Podcast